Joyland is Stephen King’s second published novel within the Hard Case Crime Novel series. The first was the much maligned The Colorado Kid. While the two novels are not nearly similar, they have one thing in common: neither is a true crime novel. 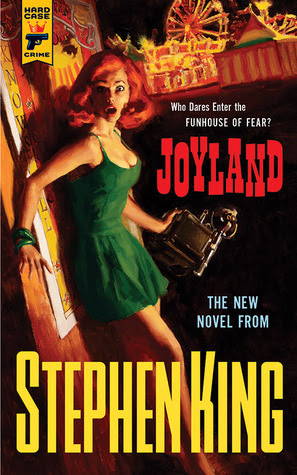 The Hard Case series is a (successful) attempt to resurrect the hard boiled, pulp detective and crime fiction of the 1930s through the 1960s where authors such as John D. McDonald and Elmore Leonard plied their trade. In reviewing the covers and synopses of these books, most of them are true to the format. The covers feature buxom beauties that reflect those misogynistic times. Women are almost always the victims. The crimes are always brutal and the guy who solves them is always a tough loner.

King deviated far from that formula in Joyland and in the process, authored an inconsistent novel that isn’t quite a murder mystery and isn’t quite a coming of age story, but tries to be both.

Devin Jones is a 21 year old college student attending school in New Hampshire in 1973.. He’s in love with a girl he’s sure he wants to marry. She decides to take a job in Boston over the summer break, so he decides to head south to work at a North Carolina amusement park known as Joyland.

Devin is quite certain about his feelings for his girlfriend, but uncertain about her feelings for him. He was hoping she would express disappointment at him moving so far away for the summer. Instead, she is thrilled and wishes him the best. He writes several letters that go unreturned. He calls her several times only to have her duck his calls. Finally, the inevitable Dear John letter arrives.

Devin arrives at Joyland and secures a room at a boarding house that provides rooms to the carnies. He makes friends quickly demonstrates that he’s a bit of a thespian by donning the costume of the pooch that is the carnival’s mascot and trademark. He’s also fascinated by a mysterious murder that took place several years before.

A young woman was slaughtered in the carnival’s house of horrors. The killer apparently arrived with the girl as her date. Unbeknownst to her, he was planning her demise when they entered the park. He was wearing two sets of clothes. The couple entered the funhouse in a car. Once inside where it was dark, the killer cut the young beauty’s throat, dumped her body inside, stripped off his outer bloody clothes and emerged from the ride unnoticed. A little research by Devin and his friends reveals that several girls died in the south during the time. All of the deaths were linked to amusement parks and carnivals.

The ghost of the slain girl is reputed to haunt Joyland’s funhouse. One afternoon, Devin and two friends, Tom and Erin take the ride to find the ghost. Devin and Erin ride the ride and don’t see a thing. Tom does as the specter of the late Linda Gray reveals herself to him. From that point on, any discussion of the murder of Linda Gray makes Tom uncomfortable and he doesn’t like discussing it. Erin and Devin remain fascinated by it.

Erin is able to obtain some photos that were entered into evidence in the killing. Photos taken by the park’s roving photographers show Linda Gray with a man with dark hair, wearing a baseball cap, and sporting tattoos on his hand. None of the photos show a clear image of his face.

Devin spends the summer working hard at “wearing the fur” as the carnies call playing the park’s mascot and pining away for his lost love. Every day he strolls from his boarding house down a beach to the park. Every day, he sees a woman in her early thirties with a boy in a wheelchair on that beach. One day, he finds the pair trying to launch a kite, unsuccessfully. He decides to help them. The boy introduces himself as Mike and the woman is his mom, Annie. Annie is the black sheep child of a nationally popular televangelist.

Mike, just ten years old, has muscular dystrophy and not long to live. He’s aware of his impending fate, but his mother is in denial, Mike tells Devin. Mike also has a bit of “the shine” and provides Devin with an important, but nebulous clue about the killer.

Devin is immediately taken with Annie even though she’s ten years his senior. She’s quite standoffish, having been the subject of tabloid stories about her wild child ways and her “love child.” She eventually warms to Devin and he becomes their friend.

With his heart still broken, Devin decides to put off his last year of college and stay in Joyland as a full time employee after the park closes for the season. Erin and Tom, now a couple, return home to New England. Erin, still fascinated by the carny murders from years before, sends Devin a large portfolio of information on the cases. Devin pores over the information. There’s something in the articles and photos that he knows is important, but he can’t put his finger on it.

Devin, having grown quite attached to Mike and Annie, arranges for the park and some of its rides to be opened for Mike after the season is over. Mike, now in bad shape, enjoys a day of rides, carnival food, and attractions, courtesy of the park management. That evening, after the fun is over, Devin and Annie make love. Annie informs Devin this can be just a onetime thing. She’s not going to commit to a relationship. The lovemaking is cathartic to Devin, helping him forget his old flame.

Devin returns to his boarding house and goes over the information again. Using the cryptic clue Mike provided, he discovers how the killer hid his identity all these years while committing multiple murders. He still doesn’t know who the killer is, but that doesn’t last long. The killer calls him and demands that Devin meet him at Joyland, lest he kill Mike and Annie.

Devin goes to Joyland as a tropical storm is hitting the North Carolina coast. There, he meets the killer and gets an explanation of how and why the murders were committed. He’s also promised a quick death high atop the Ferris wheel.

Eventually, help arrives in from an unlikely source and Devin is rescued. The killer gets justice.

Unfortunately, Mike’s disease overtakes him and he succumbs. We also learn that Devin’s close friend Tom dies of a brain tumor many years later. Devin laments that someone like Dick Cheney is allowed a new life in the form of a heart transplant while many other good people die every day.

This book reminds me very much of Robert McCammon’s Boy’s Life although it is not nearly the caliber of McCammon’s masterpiece. Boy’s Life is a coming of age story with a murder mystery that McCammon was forced to tack on by his publisher. Most of Joyland is about Devin’s feelings over the pain of having loved and lost for the first time, the joy of making new friends, and the elation of being able to do something truly wonderful for someone who has had a miserable life.

Joyland should not have been a Hard Case crime novel. The murder is really a secondary part of the story and disappears from the story for long stretches. King throws in one obligatory red herring and gives us a surprise reveal in the identity of the killer. Otherwise, he only feints at creating a murder mystery.

One of the joys of reading is identifying with the characters and I identified with Devin Jones more than any King character. I, too, fled to an amusement park to work for a summer in 1985 to get over a girl. I learned the vernacular of amusement parks and found great joy in making new friends, finding a seasonal romance to help me rebound, and enjoying the atmosphere that comes with working in a workplace where the emphasis is on fun.

At the conclusion of the novel, King writes a few paragraphs about the vernacular he developed for his book. He refers to the workers at the park as carnies. I know most seasonal workers at amusement parks don’t see themselves as “carnies.” The guests are not referred to as “marks.” We called guests, “animals” and going into the park to ride rides was called, “playing animal.” Eating the park’s food was eating Animal Food.

Coming in at just over 280 pages, Joyland is an easy, relaxing read. There are no chapters, but there are chapter breaks. The first person narrative works nicely and Devin is developed as a kind, decent person that is easy for the reader to root for.

Unfortunately, the killer and his crimes really get short shrift. I wasn’t even that interested in finding out who the killer was. I wanted to find out if Annie and Devin ended up together. In a hardboiled detective thriller, as this book was billed, one would expect the crime and its solution to be at the fore. Not only was it not at the fore, it was neatly disposed of in just a few pages near the end.

While it had some significant flaws, Joyland is infinitely better than The Colorado Kid as a book and as a crime novel. But that’s not a high compliment because The Colorado Kid was barely readable. I would have preferred that King take this story to his standard 500-600 pages and really develop the various relationships in the novel. Instead, he tacked on a murder mystery and left a lot of good story on the table.

One final thought. Something King wrote in this book disturbed me and really made me respect Stephen King less as a human being. He makes it quite clear that he was disappointed that Dick Cheney was allowed to live when he received his heart transplant.

I know Stephen King’s politics and they are different than mine. That’s okay and I respect that. However, I can not imagine hating someone so much – especially someone I’d never met – that I wished they hadn’t lived. Stephen King revealed himself to be a flesh peddler – not a very admirable trait.

At his age and as someone who survived a near death experience, I expected more of this man’s character. Yes, Cheney was a divisive figure on the national stage, but to wish death upon the man is almost as bad as killing him.

King's politics creep into his fiction more frequently these days, and it always detracts from the book. I write this not with any ideological predisposition. I don't like Dean Koontz's conservative politics making their way into his prose either.

Stephen King should confine his political thoughts to his activism and his radio station. When he injects it into his fiction, he lessens his stories. To write in a novel that he wishes a real life public figure had died is the ultimate display in bad taste and perhaps is Stephen King's worst offense as a writer of fiction.

Posted by Brian Schwartz at 1:55 AM