A Feast For Crows Book Four of A Song of Ice and Fire By George R.R. Martin

A Feast For Crows
Book Four of A Song of Ice and Fire
By George R.R. Martin
Copyright 2007

A Feast of Crows does not pick up immediately where A Storm of Swords left off – at least not for about half the characters. A select few characters see their story advance while the stories of others will have to wait for the next volume in the series. 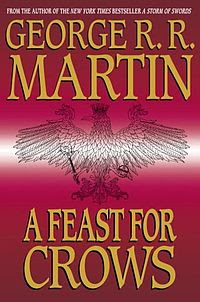 Most of the action centers on King’s Landing and Cersei. Her youngest son, Tommen is now king. He is but a ten year old boy who has a sixteen year old girl betrothed to him. Margaery Tyrell, who was wedded to Joffrey for just a few moments before he died at his own wedding, is still supposedly a virgin and ready to be bedded by Tommen when he reaches the proper age. Until that time, she holds the title of “The Little Queen.”

Queen Cersei rules in King’s Landing. Her brother, Tyrion the dwarf who she believes murdered her son, Joffrey, has escaped the dungeons and murdered their father, the all powerful Tywin Lannister. With no king on the throne, Cersei means to continue her rule. She tries to substantiate her power by having her uncle Kevan Lannister serve as her Hand. Kevan refuses and tells Cersei that he knows the secret that she and her twin brother Jaime share regarding the real parentage of the Baratheon children. Unable to find a suitable hand, she begins to fill her small council with sycophants and cronies who will not challenge her.

Cersei sees her greatest challenge in Margaery who occasionally exerts her will as the rightful queen of Westeros. This makes Cersei paranoid for two reasons. First, the Tyrells are a powerful family and with a Tyrell sitting beside the king in King’s Landing, the already powerful family would grow more powerful. Without a strong matriarch at the head of the Lannisters, their influence will weaken.

Cersei also remembers a prophecy revealed to her long ago by an old fortune teller who tells her that she will be queen, but unseated by one more young and pretty than she. She decides to scheme to discredit the young queen.

She finds a kingdom on the verge of bankruptcy. She immediately stops paying the kingdom’s debts, declaring that all resources must be channeled into the war. The kingdom’s largest debtor is the Faith of the Seven – a religious order who once held military offices within the kingdom before they were stripped of that power. Cersei makes a deal to allow the debts to go unpaid. In exchange, the Faith is allowed to restore its military presence. She hopes to use the Faith and its Maesters to prove that Margaery is not a virgin and has, in fact, committed adultery. She sends Margaery’s brother, the powerful Ser Loras Tyrell on a dangerous mission to take Stannis Baratheon’s stronghold at Dragonhold Keep. Ser Loras and his men take the castle, but Loras is gravely wounded in the battle, giving Cersei one less Tyrell with whom to match wits.

Cersei had hoped to be able to rely on the counsel of her twin brother, Jaime who has returned from the Riverlands with his sword hand gone. Little does she know that Jaime has already betrayed her by allowing Tyrion to escape and sending his mercenary friend, Breanna of Tarth, to find and protect Sansa Stark who escaped King’s Landing during the abortive wedding of King Joffrey.

The brother and sister are estranged when Jaime rises to the head of the Kingsguard. She decides to send him back to the Riverlands to restore order there. Jaime is only too happy to go. With his sword hand gone, he is not taken seriously as a knight. With the only love of his life distrusting him, he has no reason to stay. He looks upon Cersei’s schemes for power as mad and is eager to get out of town.

Both of the Stark girls are on the lamb under assumed names. Sansa is with Petyr Baelish in the Eyrie. Peter is the lord and master of that castle after he weds, then murders the queen there. Sansa poses as Petyr’s bastard daughter and is betrothed to the little, sickly prince Robert who is a petulant, weak child that Petyr is sure will die soon. When that happens, Alayne – as Sansa is now known – will be betrothed to another that will allow her to reclaim the rule of her homelands in the north.

Arya has gone to sea and its up on the island Braavos with a cult of assassins. She poses as a huckster of seafood in the market while learning all she can for her new masters. She is told to shed her old identity of the Lady Arya Stark and develop a new identity. She must divest of all of her worldly possessions, but holds onto her sword, Ice, as a memento of her former life. Cat tries hard to develop this new identity, but has dreams of hunting wolves which keep her in touch with her former identity and former life. When she is unable to let go of Arya, she is fed warmed milk laced with a drug that leaves her blind.

Brienne is searching the Riverlands for Sansa Stark whom she tells people is her sister. She finds Tyrion’s former squire, Poderick, on the lam and he joins her. She also finds one of Renly Baratheon’s knights with whom she served in her former life. They move across the countryside and witness the devastation the war has brought to the kingdom. One night, they check into an inn and are set upon by the Brotherhood Without Banners – a group of renegade former Stark loyalists. Brienne is beaten badly and the group is captured. They are taken before the Lady Stoneheart which is actually the undead Catelyn Stark. Lady Stoneheart sentences them to hang. Each of them are placed on a rope hanging from a tree. Just as Brienne falls, she yells a mysterious word – a word we don’t know about.

A Feast of Crows doesn’t give us any new news from The Wall, but Samwell Tarly makes the journey from The Wall to Oldtown to begin his training as a maester. With him is the girl, Gilly who has a babe with her. When they leave The Wall, Sam believes it is her daughter fathered by Mance Rayder. As they travel, Gilly is inconsolable with grief and Sam figures out that Jon Snow has switched the babes, sending the little prince away from The Wall and the threat of sacrifice at the hands of the red priestess, Melisandre. Maester Aemon is also along for the ride.

As they travel, Maester Aemon becomes ill and is near death. The party is forced to extend their layover in Braavos in hopes he will recover. He does not. Before he dies, he hears the rumors of dragons in the east. He tells Sam that Daenerys is the fulfillment of prophecy and should be crowned queen of Westeros.

Sam eventually makes his way to Oldtown and meets with a maester to pass along Aemon’s final thoughts and to begin his training. He is introduced to another novice named Pate. We know from the opening chapter of the book that Pate is dead, having been double crossed by an as of yet unknown character who covets a key to a special book depository.

The Iron Islands are in chaos without a true leader. A king’s moot is called and the late Balon Greyjoy’s son Euron is crowned – much to the dismay of his brother, Victarion and his sister Asha. They plot and scheme against each other as the two brothers both vie to reach out to Daenerys to wed her and bring her on as an ally. Euron has a secret weapon – a horn that can summon and control the dragons.

In the southlands of Dorne, a scheme is hatched to crown Cersei’s daughter, Myrcella queen of Westeros. Myrcella is currently the ward of Prince Doran Martell. But the scheme is discovered and Doran is forced to punish his daughter, but reveals he has a plan of his own to gain control of the throne.

The book climaxes with Cersei seemingly having all her pieces in place to frame the little queen Margaery put on trial with the newly empowered Faith for adultery. Margaery is arrested and imprisoned in a tower held by the Faith. When Cersei goes to the tower to see to the trial, she finds out that Margaery has done a little scheming of her own. Cersei is arrested for adultery. She sends a desperate message to her brother to come save her. When the message arrives, Jaime crumples it and tosses it into the fire, leaving Cersei to her fate.

Of the first four books in the Song of Ice and Fire series, this was by far the worst and the most tedious to read. Arya has enjoyed the most development and most interesting story so far of any of the characters. With her parked in Braavos, the tale lost something.

Sansa is stationery as well. Sansa’s trials and tribulations at the hands of the Lannisters in King’s Landing kept the reader rooting for her. Her flight from King’s Landing was exciting. Her conspiracy with Petyr Baelish was clever. But in A Feast For Crows, she’s little more than a babysitter for Prince Robert. That makes for dull reading.

I had high hopes for the scheme hatched in Dorne to crown Myrcella. That would have thrown even more chaos into the already crumbling world of the Lannister family. But Martin introduces it, leaves it alone for a few hundred pages, then has it unceremoniously unravel. One can only hope that the otherwise dull storyline unfolding in Dorne will become interesting again.

Cersei’s machinations were the high point of the book. And while the reading of the schemes of the people of Dorne and the Iron Islands was dull, Cersei’s web was complex and interesting. The climax was wonderful and no doubt many readers are eager to see Cersei get hers. The other cliffhangers such as Arya going blind and Brienne left dangling from a noose while uttering some significant single word were clever. While it is a stretch to say that these exciting cliffhangers made wading through A Feast of Crows worth the time, they did make up for a lot of boring storylines.

The problem with the book is it is only half the story. That’s a bizarre statement to make about a book that comes in at approximately 800 pages. But many of the characters we have been following such as Daenerys, Jon Snow, and others do not appear at all. I particularly miss Tyrion. I’m eager to learn his fate.

This is because as Martin was writing A Feast For Crows, it became apparent that the manuscript was too long to be just one book. Another bizarre statement about a man who thinks 1,000 pages makes a book. Rather than tell half a tale about all the characters, Martin opted to tell the whole tale about half the characters.

Martin reveals all of this in a postscript to the book. He tells his readers the rest of the story is coming in about a year. A Feast for Crows was published in 2005. The next installment – promised for the next year – was not published until 2011. I’m not holding my breath waiting for him to finish book six in what will be a series of seven.

Posted by Brian Schwartz at 9:51 AM

Labels: A Feast for Crows, A Game of Thrones, A Song of Ice and Fire, George R.R. Martin