Book to Movie: The Thing from Another World (1951)

Book to Movie: The Thing from Another World (1951)
Screenplay by Charles Lederer
Directed by Christian Nyby
Based on the novella, Who Goes There by John W. Campbell

In 1951, Hollywood was just starting to recognize the value of science fiction at the cinema and The Thing from Another World was an early entry in the 1950s era science fiction. With a solid script, great production values, and decent acting and directing, the dramatically altered story emerged as a film classic. 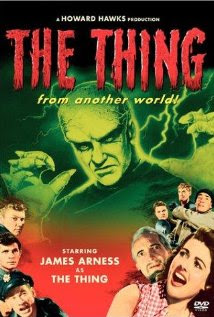 The only plot portion The Thing From Another World shares with Campbell’s story is that an alien crashes in a cold part of the earth and is brought back to a remote lab where it gets loose and unleashes terror. The shape shifting trope is not present in Charles Lederer script.

Action is transported from Antarctica to the polar region. The movie opens with an Air Force crew stationed in Alaska ordered to a polar military installation to investigate a strange phenomena.

The crew arrives – with a reporter in tow – to find a large crater frozen over. They can make out a saucer shaped ship under the ice. Just as in Campbell’s story, they try to free it with explosives and destroy the ship. However, they recover a block of ice with an alien body inside.

The scientist at the camp wants to thaw it and examine it. The block is thawed and the creature escapes. From there, the story becomes a cat and mouse game between the creature and the crew.

In this movie, the creature is a plant-based life form. It flees to the greenhouse and uses human and dog blood to fertilize plants that are its spawn.

Eventually, the crew is able to lure the creature into a hallway where an electrical field is set up to electrocute it. The tall, hulking creature with long arms gets his from several thousands of volts.

Like movies of the 1950s, there is romantic tension between the leader and a female. Unlike in most 1950s flicks, she isn’t a damsel in distress. She is the station administrator and quite adept at taking care of herself. The reporter serves as the narrative voice.

The creature was played by James Arness who would go onto Hollywood fame as Sheriff Matt Dillon in Gunsmoke. He’s heavily made up and almost always shown in shadows until the final scene.

The Thing from Another World is quite highly regarded by science fiction fans and movie fans in general. In 2001, The Library of Congress found that it had significant cultural value and selected it to be among the films preserved in its archives in the National Film Registry.

There is some controversy as to actually directed the film. Christian Nyby is listed as the director, but many contend it was directed by Howard Hawks who was somewhat of a one man movie factory in the 1940s through the 1960s. Some cast members say Hawks directed all but one scene of the picture. Others say Hawks had directorial input, but it was Nyby’s movie.

In his book, Danse Macabre, Stephen King cited The Thing from Another World as a movie indicative of the national zeitgeist of the time in regard to scientists versus the military. In this movie (and many movies from that era) it is an obsessed scientist that unleashes the evil. The military comes in and saves the day. In 1951, before the Korean War became so unpopular, the military was held in high regard, having won World War II. Scientists, the guys who smashed atoms and unleashed incredible power to level cities were not the good guys. By the 1970s, after Vietnam, the roles were reversed with military men playing the heavy and scientists saving the day.

The Thing from Another World is not nearly the movie that John Carpenter’s The Thing was with all its tension and action. But for the time it was made, it was an excellent film. It would not be long before subpar directors and writers were turning out shamelessly bad sci-fi to make a buck. But in 1951, The Thing from Another World and The Day the Earth Stood Still showed movie fans that sci-fi could be intelligent and culturally relevant. Finally, it is her turn to provide a sound and she gives the audience the sound she wants to hear more than anything.

Posted by Brian Schwartz at 6:37 PM

Labels: John W. Campbell, Thing from Another World, Who Goes There?