Who Goes There? By John W. Campbell (writing as Don Stuart)

Who Goes There?
By John W. Campbell (writing as Don A. Stuart)
Copyright 1938 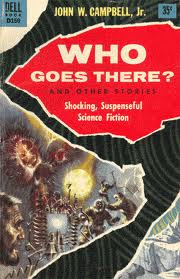 Researchers at an Antarctic research station discover a spaceship that crashed millions of years prior – before Antarctica was ice covered. They try to dig through the ice to find an opening to the spaceship and accidentally destroy it. However, close to the ship, they find the frozen remains of one of its passengers.

The story opens with the crew of the station debating whether or not to thaw it. The leader of the station finally allows the crew’s biologist to thaw it for research purposes. It is placed in a warm room and allowed to thaw under guard. The guy guarding it reports several hours later that he fell asleep for a few hours and when he awoke, the creature was gone.

The crew discovers the alien trying to convert itself into a sled dog. They now know that they are dealing with a shape shifter and that one or more of them may actually be an alien which can convert itself into one person or being after another. The crew decides that, in order to protect civilization from a malevolent being capable of perpetuating itself by assuming one identity after another, it must cut itself off from civilization. They disable their planes and sleds.

A physicist and the cook go insane with worry as the crew all begin to suspect each other of being aliens. The biologist devises a test that he says will definitively determine who is alien and who is not. The test shows that none of them are aliens. But then, the biologist finds that his test was not as conclusive as he first thought.

The physicist and the cook are locked up in separate rooms as the crew decides how to protect themselves while determining who is safe and who is not. They resolve to stay together and decide to watch a movie as a diversion. As the movie gets underway, the crew notices that the cook, who has been raving loudly in his cell, has shut up. They go to investigate and find the cook murdered. They also find that he had been taken by the alien.

At that point, the biologist develops what he is sure will determine who is and who isn’t an alien. Each part of the alien, he says, is independent, or “selfish.” Any part of any alien will seek to escape or survive. He proposes that each man provide some blood. Electricity is then to be applied to the blood. If nothing happens, the man is okay. If the blood moves or tries to escape that man is an alien.

The first man tested checks out and is then armed with a sharpened stick to kill those who are not. As the tests proceed, fourteen men are revealed to be aliens and are killed – including the commander. The new commander, McReady, decides to go check on Blair, the physicist, who went insane a week ago when the alien was thawed. They arrive at the remote shack where Blair was imprisoned and find that he, too, is an alien and hard at work on his escape plan.

McReady and the others fight the creature. They eventually drive it out into the harsh Antarctic weather and attack it with blow torches, finally killing it. They then enter the shack to find out the creature had developed a nuclear reactor to heat its chambers to a comfortable temperature for it (about 120 degrees) and was working on an anti-gravity device to help it become airborne where it could have become a bird and flown to civilization.

McReady and the others are relieved to find out they arrived just in time to save humanity.

I so wanted to like this story. Three great movies were based on it. The Thing from Another World in 1951 is a loose adaptation, that utilizes the trope of scientists and military outwitting a powerful monster. John Carpenter used its premise for The Thing in 1982 which plays heavily on the shape-shifting trope, and a prequel to the 1982 film, also called, The Thing was made in 2011. I loved those movies.

I did not love the novella.

It opens so slowly. Debate over whether or not to thaw the creature opens the story and goes on for pages. Lots of dialogue (much of it stilted and awkward) with no action. Then there are long scientific explanations for the tests which were overdone. We are never told how, where, or when each of the creature’s victims were taken. The only good part of the novella was when they started running the final tests, and even that was written dryly and matter-of-factly. The final battle had a touch of drama, but could have been much more exciting. The final dialogue sounded as if it came straight from a Hollywood B- movie.

I didn’t like it, but Who Goes There? is one of the most respected stories in the history of science fiction. In 1973, The Science Fiction Writers of America voted it one of the finest science fiction novellas ever written.

I would not rank it so highly for its writing. It does deserve its reputation as a genre defining story. Its premise is wonderful and, at the time of its first publication in Astounding Science Fiction in 1938, original. But the dialogue is just horrible and the narrative reads much like a government report.

Having enjoyed those movies so much, I will tip my cap to Campbell for providing the inspiration for some great storytelling by others and respect his large contribution to the science fiction genre with this story.

Labels: John W. Campbell, The Thing, The Thing from Another World, Who Goes There?