The third Bachman book written and the third published is regarded by many of Stephen King’s fans as the worst of the Bachman books. It was King’s first published “mainstream” fiction, predating the novellas of Different Seasons by a year. In Roadwork, we find Richard Bachman’s strongest and most sympathetic character. 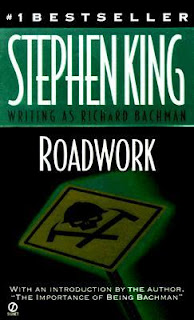 Barton Dawes is 40 years old. He has a job and a home. Unfortunately, imminent domain in the form of a highway project is going to claim both, and Dawes isn’t mentally equipped to handle it.

At the industrial laundry where he works in middle management, he’s the guy in charge of securing a new facility for the laundry before the highway claims it. The company has an option on an existing factory and all Bart has to do is sign the papers. For reasons he can’t explain to himself, he can’t do it.

His home is also in the highway’s path and Bart is reluctant to relocate. Most of his neighbors have taken the city’s money and moved on. Bart’s only son lived in that house and he would later die of a brain tumor. That home is the only place his son ever lived in his short life.

Bart makes some large firearm purchases. Again, he really doesn’t have a plan of any sort. He just wants them around.

The day comes and goes for the option on the plant and Bart buffaloes his bosses just long enough to make sure another company gets it. The laundry is going to have to go out of business. Bart is fired. His wife, Mary, is devastated and leaves him. Bart is left alone in the home he once shared with a family in an empty neighborhood he once shared with friends.

Bart takes to long drives during the day to pass the time. One evening, he picks up a female hitchhiker and takes her home. They end up sleeping together. Before the girl sets out for Las Vegas, she gives him some high grade mescaline. He puts it in his pocket and forgets about it.

Bart has decided to take action and tries to buy explosives from the local mobster. The guy thinks Bart is nuts and won’t play ball. Bart uses Molotov cocktails instead and burns the equipment and construction office at the building site.

Christmas comes and goes with Bart still separated from his wife. They’ve been invited to a New Year’s Eve party as a couple and decide they should go. They arrive separately and on the way, Bart decides to consume the mescaline. He starts tripping hard and Mary is horrified that he’s taking drugs. A drug counselor who happens to be at the party takes him home.

After the first of the year, Bart is the last resident on his street and the city is anxious to get him out of his house so they can clear it. An attorney stops by and Bart hassles the man without mercy before coming to an agreement that will have Bart out of the house on January 20. He cuts Bart a check for more than $60,000.

Bart takes half and sends it to Mary. He tries to donate a large amount to the free coffee house the drug counselor operates. He won’t take it. He knows Bart is suicidal.

He has one final conversation with Mary where they agree to divorce. They look back on their lives nad the loss of their only child. Mary tells Bart that while she was able to move past it, he was not. She wants Bart to move on. They end up saying I love you one last time.

Bart takes the rest of his cash and buys high grade explosives from his mobster buddy who’s finally decided to help him out. He also pays the guy to find the girl with which he had the tryst and to give her some cash. He wires his house with the stuff, loads his guns, and waits for the city to come move him out.

The attorney shows up with a couple cops and Bart fires on their cars with an assault rifle. He assiduously avoids hurting anyone, but does plenty of shooting, hoping to attract the attention of the media. The reporters shows up and one manages to sneak into the Dawes home. He interviews Bart and Bart talks about how heartless and senseless eminent domain is. When the reporter leaves, Bart blows his home and himself to pieces.

It is later revealed that the highway extension was not necessary. It was done to spent federal grant money that would have had to have been returned had it not been spent.

Bart was functional after the death of his child. But that tragedy made him resistant, even paranoid about change. And change was occurring in both his home life and work life, caused by the construction of a single highway. Bart put in more than 20 years in that plant. Bart lived in his home for more than 20 years. Major change is not easy to deal with at middle age – a reality lost on me when I was 20 or even 35.

Bart is not an anti-hero, but he is not a heroic figure. In many ways, he’s quite selfish. He put many of his coworkers out of work when he did not secure them a new plant. He destroyed his wife’s way of life when he lost his job – the wife that had learned to depend upon him and nobody else through 20 years of marriage. Despite that, he remains sympathetic because he’s already suffered life’s greatest loss and God and the government want more.

The book has one other major charm for me. It is chock full of 1970s cultural references. Set in 1973, the energy shortage is referenced many times. Names like Dick Cavett, Merv Griffin, and Johnny Carson pepper the prose. Not only does King weave a sad tale of loss, he captures the zeitgeist of a decade that had just fallen into the rearview mirror of time when he wrote this book.

King himself, in his essay, Why I Was Bachman, says Roadwork is probably not a very good novel. King was a younger man then. His perspective might have changed and as he enters senior citizen status, I must believe that, were he to go back and read what he wrote when he was in his 30s, he might be surprised at how well he captured the fear and hatred of change that comes with middle age.

Posted by Brian Schwartz at 9:06 PM