A Dance with Dragons Book five of A Song of Ice and Fire By George R. R. Martin

A Dance with Dragons
Book five of A Song of Ice and Fire
By George R. R. Martin
Copyright 2011

A Dance with Dragons is “the rest of the story,” telling the tales of the characters not included in A Feast for Crows. Instead of moving the story toward resolution, Martin makes the plot increasingly complex. And, as with the other books, a few of our favorite characters seem to pass away. 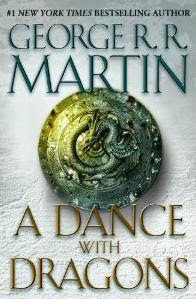 On the wall, Stannis Baratheon decides it is time to take the war south to the Bolton’s who now occupy the ancestral home of the Starks. They march through snow and storms and eventually stall a few miles from the walls of the castle.

Jon Snow decides that to maintain the wall against the forces of the dead, he needs a treaty with the Wildlings with whom he hopes to fill the empty keeps along the wall and draft their most able boys and men into the Night’s Watch.

He negotiates the treaty, against the wishes of many of his allies in Night’s Watch. The Red Priestess, Melissandre – left behind by Stannis as he marched south – warns Snow that he has enemies among his own ranks. When a raven arrives from Winterfell, he learns the truth of that vision. Roose Bolton says he’s met Stannis and defeated him. He demands the return of Theon Greyjoy – whom he has held prisoner and tortured into complete subservience. He also demands the return of his wife, whom he believes to be Arya Stark but is actually a serving girl once employed by the Starks named Jeyne.

Jon has tried to maintain the neutrality of the Night’s Watch, but decides he must go south to meet Bolton before Bolton can come to the wall and wage war. He asks for volunteers and prepares to set off. Before he can, he is stabbed by several of his own men. He either falls unconscious or dies.

Roose Bolton, the incredibly cruel bastard of the Bolton family is safely installed at Winterfell and has married the girl he believes to be Arya Stark, making him the rightful heir to the Stark home. With Bolton is the man formerly known as Theon Greyjoy. He has been tortured and beaten and has gone insane. Imprisoned in a dungeon, he’s come to think of himself as “Reek.”

However, when Bolton moves north to occupy Winterfell, Theon starts to regain some semblance of sanity and works with other dissidents to free Jeyne Poole who has suffered horribly as Bolton’s wife. Theon and Jeyne escape Winterfell and into the darkness of the winter night.

Bran Stark, we learn, is a shape changer. This is how he is able to enter the body of his direwolf. He expand his talents and enters the body of his servant, Hoder as well. With the help of a dead night, Bran finds the Three Eyed Crow and his people who can live in the souls of trees and view events past and present.

We learn that Davos Seaworth, ordered executed by Cersei, is still alive. Lord Wyman Manderly told Cersei that he had Davos executed upon his capture, but instead, held him alive. Manderly tells Davos that Rickon Stark has been secreted away on a remote island. He needs Davos to go to this island and smuggle the young Stark heir back to Westeros.

Cersei is in prison and alone. All that were loyal to her have forsaken her and the Sparrows are demanding that she confess her sins of adultery before she can be released. Deciding she has no alternative, Cersei makes a partial confession – enough to earn her release from prison – but not enough to avoid a later trial on the counts of adultery and incest to which she would not confess.

As an act of contrition, Cersei is forced to march from her prison to the King’s quarters naked whilst the people of King’s Landing jeer. Cersei makes the march, but her spirit is broken. When her uncle visits her later, he finds her docile and subdued and no longer prone to mischief.

Jaime Lannister is in the north to bring to a close the final battle in the war with the Starks. He negotiates the surrender of Riverrun, ending the siege of Raventree Hall. While trying to restore order after the war, Briene Tarth, whom we were led to believe had died, finds Jaime and tells her she has located Sansa Stark and that Sandor Clegane is hunting her as well.

Little Arya Stark is no longer Arya Stark. She has joined an order of assassins who have no names and are able to change faces. Given her first assignment, Arya struggles to forget herself and prove herself. She assassinates a Braavosi banker at the request of the leader of her order.

The novel is primarily focused on Daenerys Targaryen and her dragons. Everybody wants to be her ally and everybody is trying to get to her.

Tyrion, with the help of Varys, Tyrion boards a ship that sails for Pentos. He finds that there is another Targaryen. The babe thought to have been killed by Jaime Lannister as an infant, Aegon Targaryen, is alive and well and sailing to meet his cousin to form an alliance.

While ashore for supplies, Tyrion is kidnapped by Ser Jorah Mormont who hopes to take him to Dany to earn her trust again. But while en route to Meereen, the ship is trapped in a storm and nearly destroyed. It is boarded by slavers and Tyrion and a dwarf woman who performed at the fateful wedding in King’s Landing are sold into slavery where they become mummers.

However, a plague is sweeping the city and their master falls ill and dies. Tyrion, Mormont, and his new friend escape to join a group of sellswords.

Dany, having ended the practice of slavery in Meereen wants to bring its surrounding lands into her fold and end slavery and barbarism. She spurns the man she really loves – a sellsword of low birth – and marries instead Hizdahr zo Loraq, a nobleman who is supported by those who currently oppose Dany.

Dany is talked into going to “The Pits” where gladiator-like battles are fought for the pleasure of nobles. She is appalled by the violence. The final act is a pair of dwarves (actually Tyrion and his friend) jousting on a pig and a dog. Dany is appalled by the violence, but especially appalled when she learns that the final act will be the dwarves being devoured by hungry lions. As she protests this, the maester accompanying her and her new husband falls ill, having consumed many honeyed locusts that were intended for her.

While she is observing this, Dany’s black dragon, that had escaped several months before, arrives at the fighting pits and attacks, killing dozens. Several men try to kill the dragon, but Dany jumps on his back and flies away, leaving Meereen in chaos.

Quentyn Martell has traveled from Dorne, hoping to marry Dany and create an alliance with her. But he arrives too late. Dany has already wed Hizdahr zo Loraq. Disappointed, Quentyn tries a desperate act to impress Dany. He and his friends slip into the dungeon where the two remaining dragons are being held. Having Targaryen blood, Quentyn is confident he can control the dragons. However, when he gets there, the dragons turn on him and escape. Quentyn is left badly burned and eventually dies.

Victarion Greyjoy also hopes for an alliance with Dany. He and his fleet sail from the Iron Islands to Meereen to attack the slavers that are besieging the city, even after the marriage to Hizdahr zo Loraq. Before he can launch his attack however, a plague has wiped out many of the slavers.

Hizdahr zo Loraq is implicated in the attempted poisoning of Dany and is imprisoned by Dany’s hand. Meanwhile, Dany is far away from Meereen where Drogos the dragon has left her. She is tired, weak, and hungry and trying to find her way home, following a stream she hopes will lead to a river and safety. As she staggers, barely able to walk, she encounters the khalasar of Khal Jhaqo, a former Bloodrider to Khal Drogo who betrayed her after Drogo's death.

The book winds to a close with Jon Connington, who has been acting as a steward, tutor, and mentor to young Aegon Targaryen, takes back his ancestral home and prepares to aid in the restoration of the Targaryen family to the throne – not in the form of Dany – but in the form of her younger male cousin.

Kevan Lannister visits his niece and the king before receiving word that he must return to his quarters. He arrives and finds his Grand Maester has been killed. Kevan receives a crossbow bolt to the chest and the maester Varys holding the crossbow. Varys explains to him that he cannot allow Ser Kevan to repair the damage done to the Lannister alliances by Cersei’s jealousies. He wants to see the various families of Westeros fight and weaken each other so that Aegon can pick his moment to return to power.

It feels like Martin is losing momentum with the last two books. Some parts of the story are entirely over-written, like the political machinations in Meereen after Dany’s departure. Other parts, such as Vicarion’s planned assault on the slavers is woefully under-written.

More characters and subplots have been introduced when it seems that he can’t keep track of what he’s got going already. While Martin has made a habit of killing off main characters in this series, for every character he kills, he adds three more. A Dance With Dragons is written from 18 different points of view.

Tyrion, once the most interesting character in the story, ceased to be interesting. We only got a couple chapters of Arya, one chapter of Jaime, and two chapters of Cersei whilst Martin droned on and on about hostage negotiations in Meereen.

Most of this book was written and takes place simultaneous to events in A Feast For Crows. The stories not told in A Feast for Crows were told in A Dance with Dragons. Martin briefly revisits a couple storylines from the earlier book, but not nearly enough.

Martin will have his work cut out for him bringing all of the various subplots together toward a cogent resolution. The next book is book six out what is supposed to be a seven book series. More than 6,000 pages have already been dedicated to telling this story. The time of adding new characters and subplots is over. The time to focus on bringing them to resolution has come. Let’s hope Martin’s next book (whenever he gets around to publishing it) starts us in that direction.

Posted by Brian Schwartz at 5:37 PM

Labels: A Dance with Dragons, A Song of Ice and Fire, George R.R. Martin