Book to Movie: The Running Man (1987)
Screenplay by Steven E. de Souza
Director: Paul Michael Glazer
Based on the novel, The Running Man by Stephen King writing as Richard Bachman

Two years after Richard Bachman was outed as Stephen King, a movie was made based on a Bachman book. Steven E. de Souza and Paul Michael Glazer took Stephen King’s tense thriller, The Running Man and turned into a glittery action romp. 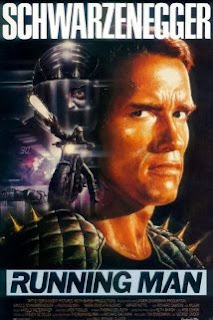 The plot barely resembles King’s vision. In the movie, Ben Richards (Arnold Schwarzenegger) is a military pilot who refuses to fire on a food riot with unarmed civilians. He is put in prison, but manages to escape with the help of an underground that is fighting the all powerful Network controlled by the government.

Richards has little interest in the group’s politics and takes off, looking for his brother. When he goes to his brother’s apartment, he finds a network music writer living there instead and he takes her hostage. He tries to use her and her travel pass to escape to Hawaii, but she turns him in at the airport. Richards is taken into custody again.

Instead of prison, he’s sentenced to be a participant in the Running Man – America’s most popular game show. The two guys with whom he escaped prison are rounded up and join him.

Ben Richards is introduced to America as the “Butcher of Bakersfield” who fired on unarmed civilians despite orders not to. A doctored tape is played for the audience. They also describe the murders he committed at the airport when he was retaken. This captures the attention of Amber Mendez, the girl who turned in Richards because she knows it didn’t happen.

Richards and his friends are propelled via a rocket powered sled through a shoot to a 400 block square hunting zone. They are chased by hunters dressed as various themed characters. While down there, the computer hacker of the trio is able to tap into a network terminal and steal the access code for the Network’s satellite uplink.

Amber Mendez, curious about what the network has done to Ben Richards, sneaks into a film library and finds the doctored and undoctored tapes of Richards’ raid on the food riot. Before she can escape, she is caught and sent into the kill zone to join Richards.

Richards two friends die along the way, but Richards manages to connect with the Underground (led by Mick Fleetwood) who uses the code and the tapes Amber stole to steal the signal and show America the fraud perpetrated by the network.

Insipid is not strong enough a word to describe this movie. It had nothing going for it. Puns not worthy of Loony Tunes. Costumes that would embarrass the stars of 1950s Saturday matinee shorts. A syntho-pop soundtrack of no quality and a plot as linear as a vector.

The cast did the best they could with the horrible script, but a cast with some big names could not rescue this film. Its only saving grace was Richard Dawson who was the only member of the cast who seemed to truly relish his role, hamming it up as game show host Damon Killian. Dawson was the only thing in this atrocious film that was good.

It appeared that perhaps the director and screenwriter were trying to spoof professional wrestling. If they were, they missed their target by making a bad movie. Dawson delivers a witless diatribe about the masses wanting violence and death near the end of the movie. But if you have to sum up the intent of your movie in a monologue at the end, you know you've got a weak script.

The only thing that makes this otherwise entirely forgettable movie noteworthy is that it features two future governors -- Jesse Ventura who would govern Minnesota and Schwarzenegger who would govern California.

Posted by Brian Schwartz at 7:57 PM