The Town By Bentley Little

The Town
By Bentley Little
Copyright 2000

Bentley Little writes two different types of horror. He writes straight horror like Stephen King used to write, and he writes social parody horror as he did in The Policy where he takes a societal problem and embellishes it to absurdity, then crafts the horror around that. The Town is the former. It’s straight horror, but not one of his better efforts at it. 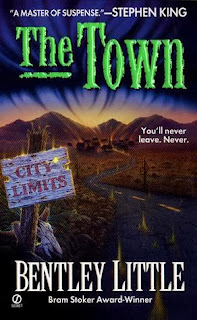 Gregory Tomasov wins the California lottery and decides to move his wife, mother, and three children from the California suburbs back to the small Arizona mining town where he grew up. His mother is a devout Molokan and when she arrives in McGuane, where she also grew up, she’s immediately afraid because she forgot to invite “The Owner of the House” spirit known in the Russian faith as Jedushka Di Muvedushka to come with them. She fears their home will be cursed.

It very well may be cursed because soon after Gregory moves into the home, he learns that the previous owner murdered his entire family there with a shotgun.

The move goes well for no one. His older daughter, once a studios teenager, falls into the wrong crowd and starts drinking, smoking, and sleeping with boys. His son finds new friends, but gets into trouble for tossing rocks at cars. His youngest daughter is picked on at school and has no friends.

Gregory reconnects with an old high school buddy who owns a coffee shop in the depressed old mining town and decides to help him with his business by investing in it and booking local talent to play on stage.

Shortly after the Tomasovs move to McGuane, people begin to die in strange ways. The Molokan minister is beaten to death by a flying Bible. A man grows an appendage from his belly button that strangles him. The Molokan church grows human hair, covering it and turning it into a living organism.

Teo, the youngest daughter starts visiting an old bath house on the property. She feels compelled to bring it dead animals to “feed” it. In return, the entity that lives in the bath house promises her revenge upon her tormenters. Later, a swarm of birds attacks the school playground, swarming everyone but Teo. After that incident, the bath house spirit suggests that she kill one of her friends and bring the body there to feed it to the spirit. That’s more than Teo is willing to do.

The incidents lead to tension in the town and people seem inclined to believe that Gregory Tomasov’s arrival has awakened local spirits that haunt the town. His mother visits a burned out section of the town, chasing a dwarf-like spirit and we learn of a crime committed two generations ago and the sin of revenge committed by the Molakons in return.

The longer the Tomasovs stay in McGuane, the more strangely people behave, including Gregory. They feel compelled to violence and mayhem.

The tension comes to a head in the town and within the Tomasov family when the lighting rig at the coffee house collapses and kills several people – including the owner’s wife who was Gregory’s wife’s best friend. At the scene of the accident was the mischievous dwarven spirit.

Gregory stops by the coffee house the day after Paul’s wife’s funeral to console his friend and finds him in the mood to fight. They fight and Gregory feels compelled to kill Paul. He’s able to stop himself and instead heads for a local bar.

Gregory’s wife stops by, looking for him, and she feels compelled to make love to Paul. Just as the heavy petting is getting started, Gregory walks in and sees them. He doesn’t say anything and leaves. Later, when his wife gets home, he beats her.

Eventually murderous mayhem sweeps through the town as violence directed at the Molokans, the local Indians, and the Mormons erupts. Meanwhile, Gregory’s mother leads a group of Molokans in summoning a local Molokan hermit who helps them corner the demon – who is a pissed off Jedushka Di Muvedushka in the Tomasov home and destroy him.

The Town had a well conceived plot to build upon, but Little misses the mark and the story, which has some great elements, really is disjointed (as my plot summary is) and doesn’t rise to meet the excellence of its conception.

Gregory, his wife, and mother are well developed characters within the novel. We’re inside their head a lot and we know that something is acting upon them to make them behave strangely. The oldest daughter, whose death is supposed to be tragic to the reader, is so poorly developed that we really don’t care. The boy, Adam is well developed, and disappears just as the story builds to a climax and is not integral to the story’s resolution. The younger daughter, Teo, is developed early on, but disappears halfway through the novel.

The elements of horror, other than the incident at the coffee shop, happen to characters that the reader doesn’t know at all. This can work if these incidents are woven into the plot. But they seem to be random chapters that don’t relate to the evil spirit that is tormenting the residents of McGuane.

Then there is the evil entity itself. I think it was supposed to be duality of good (the Owner of the Home who protects its residents) scorned and committing revenge with evil acts. But Little doesn’t make that clear. He hints that the evil may have come because, two generations before, the Molokan men broke their vowels of passivity and took revenge upon their tormenters. But once it’s mentioned, it’s never developed.

The evil spirit – a dwarven shadow – is not menacing at all and is not developed. It appears, is there and does some things, then is gone again. We know nothing of its nature and its death is really dull.

Bentley Little has written some intense horror like The House and The Association. There is no doubt the man can write quality horror and sometimes mix it well with gonzo social commentary. This book seems rushed, as if he had some good ideas for his plot, but never got around to developing them.

Little doesn’t get enough credit among horror fans for his work and he’s not especially good at marketing himself. That is why I recommend him all the time to my friends who enjoy horror. But I won’t be recommending The Town.

Posted by Brian Schwartz at 6:56 PM