The Last Dark Book four of the Last Chronicles of Thomas Covenant the Unbeliever By Stephen R. Donaldson

The Last Dark
Book four of the Last Chronicles of Thomas Covenant the Unbeliever
By Stephen R. Donaldson
Copyright 2013

Stephen R. Donaldson finally brings to climax the story he has been telling for 37 years. The end of The Land is at hand and he and Linden Avery must decide what course of action they will take in the face of insurmountable odds. 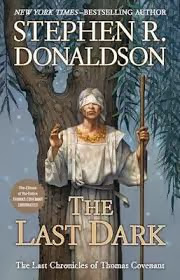 Linden, Jeremiah, and the company awaken expecting to see the dawn. But the sun does not rise. The Worm of World’s End is making its way toward the land and darkness has fallen. Daylight is just a faint glow. The party watches in horror as the stars begin to wink out, one by one. The stars are the Elohim, being consumed, one by one, by the worm.

Reasoning that the Elohim must be saved, Jeremiah builds a small fortress for him, using his talents as a builder and invites them in where they can be safe. They enter reluctantly, taking with them the tormented Elohim, Kastenessen, who has generated Kevin’s Dust that blocks the party’s health sense. The Elohim are safe.

Linden then creates a fissure in time to go back and seek the power of the Forrestal to create a Forbidding to slow the worm’s progress. With her she takes one of the Haruchai who is transformed into a Forrestal. They return to their own time where Linden is delighted to see that Covenant has found his way back to the party. Linden and Thomas decide to get married.

Covenant decides The Land’s fate is sealed; there can be no stopping the Worm. However, he wants to make sure that Lord Foul does not become a part of the Arch of Time when the world ends and sets out to defeat him.

The party battles their way through Mount Doom where Covenant faces Lord Foul, inhabiting the body of his son, Roger. It is then that Covenant defeats the Despiser once and for all not with white gold, but with compassion. As he does this, the worm destroys the world.

The party finds themselves in a meadow after the end of the world. It has been reconstructed anew. They decide to spend their days there, building a new Land.

The plot of this installment of the Covenant series moves with a pace that I didn’t think Donaldson had in him. The constant self-recrimination, self-loathing, and second guessing that were such a distraction in the earlier books is almost absent from this one.

Both Linden and Covenant are decisive. They act out of instinct. The book is filled with battles, meticulously written. Donaldson employed a wonderful device to bring the story to a close and define the relationship between Lord Foul and Thomas Covenant.

The last series made for tedious reading. But the climax in the fourth made up for it and brought together all of the plot elements nicely. Thirty-seven years is a long time to wait, but this final part of the story is well worth the time spent reading Thomas Covenant’s saga.

Posted by Brian Schwartz at 8:20 PM