Misery was all set to become the latest installment from King nom de plume, Richard Bachman when Bachman got outed. So, instead, it just became another bestseller for Stephen King and a strong rebound from the fan-disappointing Eyes of the Dragon. 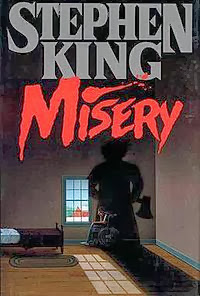 Paul Sheldon is the writer of bodice-ripper novels starring the heroine, Misery Chastaine. He’s just finished a “serious” novel called Fast Cars that he hopes will earn him some respect with critics. After celebrating its completion with copious amounts of champagne, he decides to drive from his hotel in Colorado to Los Angeles. But he hits a snow storm in Colorado and wrecks his car, injuring himself badly.

He awakens in the first floor bedroom of a remote Colorado farm house. His legs and pelvis are badly mangled and have been crudely set. He’s been rescued by his number one fan, Annie Wilkes, a nurse who is just a little bit insane.

Annie is unhappy that her beloved Misery Chastaine died at the end of the last novel. She makes Paul destroy the manuscript for Fast Cars and orders him to bring Misery Chastaine back to life in a novel just for her.

Paul is in a great deal of pain and relies on Annie to provide medication to relieve that pain. He soon becomes addicted. But Annie is moody. Sometimes, she disappears for days, leaving Paul in agony.

Despite all this, Paul manages to write. Annie is there to read each chapter as it’s finished. The ancient Royal typewriter she’s provided Paul has no “n” so Annie pencils in the “n’s” with great delight.

When Annie is away, Paul manages to sneak out of his room from time to time. One time he steals several pills of his medication to hold him over while Annie goes to her “laughing place” when she is in the depths of depression. Another time he finds a scrapbook that reveals that nurse Annie Wilkes was an angel of death at each hospital where she worked. She once stood trial for murder, but was found not guilty.

Annie learns of Paul’s excursions from his bedroom and decides to limit Paul’s mobility. She cuts off one of his feet with an axe. When the police discover Paul’s car after the spring thaw, she kills the state troopers that come to investigate.

For months Paul has been pounding away on the Royal to complete the Misery Chastaine novel. Despite the insanity of his life, he is still enjoying the work and is proud of the book. Annie informs Paul that their time is short. He needs to wrap up the novel because the police are certain to find her out eventually and she plans a murder-suicide to bring their relationship to a close.

Annie plans an elaborate ceremony for the reading of the final chapter of the book. She purchases caviar and champagne. Paul has his own elaborate ceremony planned as well. As Annie prepares to read the climax of the novel written just for her, Paul sets fire to the manuscript using matches and lighter fluid he has squirreled away.

He then clouts her on the head with the heavy typewriter. For months, the Royal has served a dual purpose. It has served as a writing instrument and also as a weight for Paul to develop upper body strength. With well toned arms, he smashes Annie a good one on top of the head.

The two struggle before Paul eventually makes it out the front door where two state troopers have just arrived. Annie escapes, but is later found dead in her barn, her skull fractured from the blow Paul dealt her.

As the novel winds down, we learn that Paul did not burn the manuscript, but a fake stack of papers with the title page on top. The novel is going to be published and with the publicity of Paul’s ordeal to market it, is certain to be a major blockbuster. But Paul is a changed man. Writing is now difficult and he’s uncertain if he’ll ever write again. To compensate for his withdrawal from pain killer addiction, he becomes an alcoholic.

However, one day, while taking a short walk, Paul encounters a boy with a pet skunk. His dormant muse springs into action and Paul begins to write again, basking in the joy of finding his craft again.

I had originally rated Misery as an average book in King’s canon. However, after this reading (my fourth), I’ve upgraded it to above average. I’d forgotten how menacing a creature Annie Wilkes was. Her lack of conscience, her unpredictable mood swings and her violent temper make her one of King’s more horrific creations. When you juxtapose Annie against the many “monsters” of King’s contrivance, Annie Wilkes ranks with the best of them. When you consider that’s she’s not supernatural, but a human being, she’s even more menacing.

King did not overwrite Annie to make her maniacal. In fact, she is quite believable as a person. If you’ve ever dealt with a person who is bipolar or suffers from clinical depression, you know that there are many real life Annie Wilkes walking the earth. King added just the right amount of sadism to make her a terrifying presence. Any more would have made her a horror movie caricature. Any less would have made the novel dull. Bravo to Stephen King for conjuring one of his best villains out of real life rather than the supernatural.

The novel had two major drawbacks. First were the long stretches of the Misery Chastaine manuscript. These were really pointless and quite distracting. Typeset in the book in an ancient font with the letter “n” penciled in, they were hard to read. It added nothing to the book except to pad the page count of what is one of King’s shorter novels.

The other was the brevity of the final conflict. The struggle between Paul and Annie was entirely too short. Misery is a claustrophobic novel. The reader is trapped in that room with Paul and his tormentor for a long time. The final battle between the two should have been longer and more dramatic as a payoff.

King has described this book as his own battle with being imprisoned. He was imprisoned by drug and alcohol addiction. He was imprisoned by his fans who were disappointed in his departure from horror in Eyes of the Dragon and wanted him to return to horror. While King has written many books with writers as the main character, there is probably more of Stephen King the man in Paul Sheldon than any other of his books.

Misery was a book that just begged for screen treatment and in 1990, the movie was made. The superb movie nearly surpassed the very good book and launched the career of Kathy Bates.

Posted by Brian Schwartz at 2:15 PM