The Years of Lyndon Johnson: The Path to Power By Robert A. Caro

The Years of Lyndon Johnson: The Path to Power
By Robert A. Caro
Copyright 1982

Robert Caro describes in great detail the rise of a poor farm boy from the desolate Hill Country of Texas to the halls of Congress and confidant of the nation’s most powerful president. 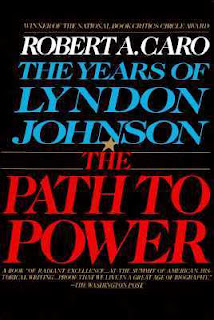 Lyndon Johnson’s ancestors, like many others moving west in the late 19th century, settled in the Texas Hill Country, west of Austin. The country looked ripe and rich. But its thin soil held doom for all who tried to farm it. The Johnsons, like most of their neighbors, went broke trying to farm the thin soil that barely hid a bedrock of limestone.

Caro introduces us to young Lyndon Johnson who was a dutiful loving son as a young boy and a reckless, rebellious teenager as a youth. As a boy, he frequently joined his father on sojourns in the state capital of Austin where Sam Johnson served as a legislator. An uncompromising populist, Sam Johnson soon lost his political power, his money, and his status in the community. That is when Lyndon turned rebellious.

It was when he went off to San Marcos Teachers College that Lyndon Johnson first demonstrated his ability to develop power bases seemingly out of thin air. He created a shadow organization to challenge the student organization that elected student councils and officers. He cultivated a father-son relationship with the implacable president of the college that earned him many special privileges. It was here that he also learned the art of political cheating, often stuffing the ballot boxes to get his candidates elected.

For all of the questions of character that have been raised over the years about Lyndon Johnson, he did have one virtue that made him special. He was a gifted teacher. Out of college, he took a job as a principal in a poor city south of San Antonio. There, he transformed the school and was beloved by his students and school administration. In another teaching gig, he served as a speech teacher and drove his students hard to achieve. They loved him for it.

But the path to power that young Lyndon Johnson craved so badly did not lay in teaching. It was in politics and Johnson got his break when he landed a job with Congressman Richard Kleberg of Texas. Johnson finally made it to Washington.

Caro meticulously documents and narrates how young legislative secretary Lyndon Johnson built a power base as formidable as that of any congressman. Kleberg was a congressman in title only. He did no work. Johnson did all his work, helping constituents and he made sure that those constituents knew it was Lyndon Johnson who took care of them.

He wined and dined bureaucrats so he could get prompt service. He endeared himself to powerful men like Sam Rayburn, to whom he became a “professional son” as he did to his old college president. He made important financial connections to the Texas construction firm of Brown & Root who would serve as a campaign cash cow for Johnson for decades.

He would not remain a legislative secretary long. Ambitious for power was Lyndon Johnson and he soon got an executive position, running a New Deal agency – the Texas Youth Administration. Here, he was able to get young people jobs they were so desperate for in the early days of the Great Depression. Again, he always made sure that every job and every favor bore his imprimatur. People of all walks of life in Texas were coming to know Lyndon Johnson.

Robert Caro deftly captures the fever pitch of political campaigns in his books and when Johnson ran for an open seat in the Texas 10th District in 1937. The odds were against Johnson who did not have the name recognition of other candidates since Johnson’s home was on the western edge of the district that also took in the state capital, Austin. But Brown & Root money combined with Johnson’s dogged, tireless trekking back and forth across the district on a schedule that nearly killed him carried the day. Johnson returned to Washington as a congressman.

But he was to learn an unhappy truth about being a freshman congressman. Nobody cares what you have to say and your ideas are ignored. It was not long before Johnson became restless and bored. But he’d soon find another path to power. In 1938, vice president John Nance Garner broke with the administration and launched his own bid for the presidency. Fellow Texan Sam Rayburn was bound to support him even though Rayburn had dedicated much of his political career to carrying the water for Franklin Roosevelt in the House.

The machinations of Garner, Rayburn, Roosevelt, and Johnson were highly complex and Caro explains them carefully and concisely. Johnson saw his path to power as supporting Roosevelt, going against his surrogate father Rayburn. When all was said in done in 1938, John Nance Garner’s long political career was in tatters, Sam Rayburn was on the outs with the administration. Johnson became Roosevelt’s go-to man in Texas and in the House.

This was not enough for Johnson. Still restless in the House where he was just one of 435, Johnson yearned to move up to the Senate. His chance came in 1941 in another special election. Johnson’s primary opponent was to be the state’s popular governor and professional radio host, Lee “Pappy” O’Daniel.

Again, the odds were stacked against Johnson. O’Daniel already had statewide name recognition and organization, Johnson was little known outside his district. Johnson, with Brown & Root money quickly built a statewide organization and received support from Roosevelt. As the campaign wore on, Johnson moved up in the polls and on election day, it seemed he would win. Unfortunately for Johnson, he’d not learned the art of stealing an election.

The early returns showed Johnson winning. The day after election day, his victory seemed a foregone conclusion. However, all of the Johnson votes were in. Not all of the O’Daniel votes had been counted because they’d not all been cast.

A group of businessmen in the beer and liquor industry wanted O’Daniel out of the state where he was making their business difficult. These men engineered votes from rural counties to be counted later as they came in. The men knew how many votes they needed because Johnson held none of his back. When all of the votes – real and false – had been counted, O’Daniel was victorious.

The defeat was a crushing blow to Johnson and his supporters. But the defeat was the least of Johnson’s problems in the wake of the unsuccessful 1941 campaign. The IRS took an interest in Brown & Root’s finances – especially contributions made to the Johnson campaign. The first volume of Caro’s expansive biography of Lyndon Johnson ends with Johnson using his influence with the president to shut down the investigation.

Caro’s account of Lyndon Johnson’s early life and career is as compelling as a novel. He captures the duality of Johnson who was a man without principle. He was all things to all people in his career. With conservatives, he was a conservative. With liberals, he was a liberal. He was Rayburn’s friend while working to ruin him. It might seem that Johnson was a complicated, complex man, but he was not and Caro presents him just as he was: A man with nothing but winning on his mind.

Caro brings to life the relationships Johnson had with his mother, whom he loved and adored, and his father, against whom he rebelled and seemed to hate because his father had lost an election on principle and ruined his career.

Lady Bird, who was interviewed extensively for this volume, we find is a complex person. Smart and savvy, she was also demur, even by the standards of the times. Johnson treated her as a servant and belittled her in front of important company. She tried hard to learn the issues so she could participate in the conversations. But Johnson did his best to keep her silent and dutiful.

Johnson’s affair with Virginia socialite Alice Glass – who was also interviewed for this volume – is well documented and is quite interesting. While Johnson was sleeping with Glass and apparently in love with her, he was taking money and enjoying the editorial support of her publisher husband.

Caro takes the time to develop the characters in Johnson’s life just like a novelist. Interesting thumbnail biographies of people like Johnson’s father, Samuel Johnson, Sam Rayburn, Lady Bird Johnson, and Pappy O’Daniel appear as pauses in the narrative of Johnson’s life and make the reading experience a rich one.

Caro has since completed three more volumes of his exhaustive biography of one of this century’s most compelling political figures. Volume one is perhaps the least compelling of them. But it is still excellent and worth the time of wading through the 800 plus pages. When Caro is done, no president of the 20th century will have undergone such a thorough historical vetting.

Posted by Brian Schwartz at 6:27 PM