A Study in Emerald
Sir Arthur Conan Doyle meets H.P. Lovecraft in this story where the great Sherlock Holmes must solve the murder of a German royal who is, in fact, one of Lovecraft’s Old Ones. 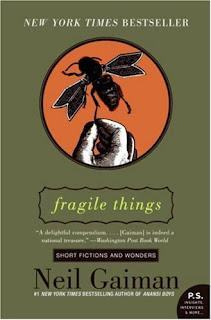 Gaiman welds the two genres and styles nicely in this pastiche.

Fairy Reel
This is a poem. I am not qualified to judge poems because I know nothing about poetry.

October in the Chair
A group of twelve people, each named for the months of the year, gather in a forest to tell stories. After a couple false starts by other months, October, who sits in the big chair this month, tells the tale of a young man unloved at home who runs away. He meets the ghost of another boy and they play in a ghost town and cemetery. The runaway aspires to be dead so he can join his friend. His friend shows him a house where that can be accomplished.

This was a well told children’s ghost story. Had it been that Neil Gaiman was writing when I was a preteen. I’d have eaten this up. It has been described as a dry run for the Graveyard Book.

The Hidden Chamber
Yet another poem.

Forbidden Brides of the Faceless Slaves in the Secret House of the Night of Dread Desire
This is the story of an author writing a story. But the author’s reality, the story’s reality, and our reality are quite different and what he regards as reality would be our fantasy and vice versa.

This was a clever, original idea for a fantasy short story. Give Gaiman an A for originality. It’s also well written with an excellently developed main character.

The Flints of Memory Lane
Neil Gaiman relates what was his encounter with a ghost.
Gaiman deemed it “unsatisfactory” in the telling and he was right.

Closing Time
At a British after-hours club, the crows exchanges ghost stories. One man tells a story that happened to him on the grounds of a haunted mansion in the neighborhood. It turns out the owner of the mansion is in the crowd.

This was a vanilla offering. There was nothing innovative or original about it. While the twist was well executed from a writing standpoint, it did not really add an extra chill to the story.

Going Wodwo
A short poem about reverting to a primitive state.

Bitter Grounds
A man reveals what life is like for a zombie.

This story was more atmospheric and mood driven than plot driven. Nonetheless, it was written in such a way as to make it an enjoyable read.

Other People
A man enters Hell and meets a demon. He is subjected to more than 200 varieties of physical torture. When that is done, the real torture begins.

This short short story illustrates how I conceive Hell. Stephen King once said “Hell is repetition.” I disagree. Hell is living with the evil you’ve done.

Keepsakes and Treasures
An orphan hooks up with one of the world’s richest men to help run his empire and procure young men for sex. Using the man’s vast resources, he procures for his boss one of the world’s most rare sexual treasures.

This story was not for me. I liked the dark nature of the main character and I’m not a prude about sex. But the plot centered too much on homosexuality. Again, not my cup of tea.

Good Boys Deserve Favors
A young, small boy takes up the gigantic double bass as a musical instrument. He practices, but does not develop a talent for it. But, when forced into a command performance, rises to the occasion.

Nothing supernatural about this story. Nothing particularly noteworthy or special about it either. It was not autobiographical, so I wonder, what was the point?

The Facts in the Case of the Departure of Miss Finch
A screenwriter is invited by his friends to attend a “circus” with a fourth woman who is an acquaintance of his friends. The circus turns out to be a low rate fun house in a series of rooms in the London Underground. In the ninth room, Miss Finch, the dour acquaintance of the couple, is chosen as a volunteer for the exhibition in room 10. After her performance, she’s not seen again.

I like the idea of starting the story at the end. I was quite intrigued as I made my way through the story, hoping for a horrific, mysterious, or fantastic climax. Instead, the story just petered out devoid of emotion.

I’ve read more interesting album liner notes. This was about as interesting as the inevitable, “Special Thanks To. . .” section. Perhaps the story means more in context with the music.

Harlequin Valentine
A Harlequin pins a human heart to the door of a young woman, then follows her through her day as she carries the heart with her. Eventually, she arrives at a diner where she eats the heart, making it possible for her to see the phantom. Harlequin. She takes his hat and cane and the Harlequin is forced to pursue another Columbina.

This was originally published as a graphic story that was quite successful. I’m not a reader of graphic stories or novels, so I have no idea whether the graphic presentation enhanced the story. I do know it was not my kind of story, although it was well written.

Locks
A poem about a woman telling her two year old daughter the story of Goldilocks and the Three Bears while reflecting on, how time passes, she identifies with each of the bears.

I don’t know poetry, but I know what I like and I liked this one.

The Problem of Susan
A magazine reporter comes to interview a retired English professor. As they talk, the professor reveals that her entire family was killed in a train crash, just like the family in the final installment of the Chronicles of Narnia. After the interview is over, the reporter dreams of an unlikely truce, and coupling, between the lion and the ice queen.

This is an adult coda to the Chronicles of Narnia. A thoroughly enjoyable story.

Instructions
This poem is a how-to guide to survive the prototypical fairy tale.

Perhaps poetry is growing on me, because I enjoyed this one as well. Still don’t know enough about it to evaluate it.

How Do You Think if Feels
A married man falls for a London actress and they carry on a torrid affair. When the man decides to leave his wife and family to join her, his lover jilts him. Mourning the loss of his love, he molds a gargoyle out of platicine and in a dream, it delves into his chest. Years later, the man and woman cross paths again and she is eager to resume his affair. They make love, but after he falls asleep, something in his heart tells him it’s wrong.

This was a well paced narrative with a sympathetic main character. I loved the concept of a gargoyle being a protector of the heart.

My Life
A man at a bar commences with a monologue, telling his life story. His father was killed so his mother had a sex change operation and became his father. His wife lived in a coma for seventy years and was reawakened by a bolt of lightning. She was killed by a haunted dishwasher.

This story was chock full of comic absurdities. Not a bad read, but I’d like some of the supernatural and fantasy for which Gaiman is famous. The story apparently was accompanied by a photograph of a sock puppet and appeared in a book of photographs of various sock puppets.

Fifteen Painted Cards from a Vampire Tarot
Fifteen vignettes of fifteen vampires. Each reveals something about the nature of being a vampire and steps outside the common tropes regarding vampires.

This was a neat little collection of stories. Gaiman deromanticizes the vampire, revealing them to be creatures who have the same general weaknesses as humans, but forced to live forever.

Feeders and Eaters
A man (presumably Gaiman itself since the story is based on a nightmare he had) is trapped in a greasy spoon waiting for a train. There, he finds a man he knew ten years prior who tells him a story about an old woman with whom he shared a boarding house. The woman had a peculiar predilection for raw meat. When the man robs her of her source of nourishment, he takes extreme measures to right the wrong.

Diseasemaker's Croup
A rambling discourse on a disease that seems to afflict advertising men.

In the End
A last installment of the Bible where man returns to the Garden of Eden and devolves.

Interesting, but a tad sinful.

Goliath
A wannabe fighter pilot is transported to an alternate timeline and alternate universe where the earth is being attacked by aliens. In this universe, he is a pilot of spacecraft and must save the world from alien attack.

Written in The Matrix universe, this story’s overlapping timelines called for careful reading lest one get lost in the text.

"Pages from a Journal Found in a Shoebox Left in a Greyhound Bus Somewhere Between Tulsa, Oklahoma, and Louisville, Kentucky"
A confused woman pursues a woman named Scarlett all across the country. People she encounters know her mission and know the woman named Scarlett and help her in her vain effort to find the woman.

Another album liner story devoid of context. It is a bit atmospheric, but not enough so to save it.

How to Talk to Girls at Parties
Two teenage boys head off for a party, each with girls on their mind. But they end up at the wrong party. All of the girls at the party are “exchange students” from someplace else.

This story was science fiction poetry. Gaiman’s prose is wonderful and the story, while predictable, was told in such a way to make it a fantastic read.

The Day the Saucers Came
Flying saucers arrive on earth and raise the dead from the ground. They pursue the living while gods emerge from the saucer.

Not my type of writing. It was written in verse, but I’d not call it a poem. No plot. Just an attempt at flowery writing.

Sunbird
The Epicurean Club, a club of fine diners, has eaten just about every edible creature in existence – and some no longer in existence. They learn of a creature called the Sunbird which is supposed to be the most incredible delicacy in the world. The club travels to Egypt and the bird is captured and prepared for them at a coffee house known for preparing Sunbird. The club partakes and is delighted with the meal. But there’s not much time for reflection afterward.

I was expecting more from this story. The characters were dull and the plot a little too tongue-in-cheek for me.

Inventing Aladdin
Another poem that seems to summarize the story of Aladdin.

This was a complete waste of time. I don’t know poetry, but I know what I don’t like and I didn’t like this – even a little bit.

Monarch of the Glen
One of the immortals lives life in Scotland as a drifter. He is hired as security for a party to be held by England’s exceptionally wealthy at a nearby mansion. While there will be other security, his job is to handle the locals. He soon learned that the “locals” he is to handle is another immortal with a centuries-old hate.

Easily the best story in the book. This was a sequel to American Gods which was a stellar book.

Posted by Brian Schwartz at 2:45 PM