The Haunting of Hill House By Shirley Jackson

The Haunting of Hill House
By Shirley Jackson
Copyright 1959 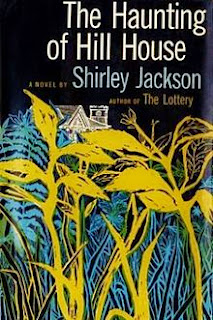 Dr. John Montague, a researcher of the supernatural, summons to Hill House, two mediums to assist him in his examination of this mysterious, abandoned mansion out in the country.

Joining him is Eleanor, a woman who once conjured stones to fall from the sky, and Theodora, a medium. Rounding out the party is Luke, a descendant of the house’s owners who insist that they have a representative in the home during the research.

The action centers on Theodora who is neurotic and given to daydreaming. She steals her sister’s car and travels through the country to arrive at the gates of Hill House. There, she is met by the creepy grounds keeper Mr. Dudley who makes a couple ominous statements before allowing her to enter.

Theodora is able to explore some of the house and surrounding grounds before she is joined by her colleagues. Once they are all there, Dr. Montague tells the group of the house’s history and what he expects of them.

The first couple nights pass uneventfully before the haunts show up. One night, as they sleep, something starts banging on the walls. Theodora joins Eleanor in her room as the sounds grow closer and closer to their door. A night later, mysterious writing appears on the wall that bids Eleanor to come home.

Eleanor seems to experience more manifestations than anyone and soon the others suspect that she is precipitating them herself because she desires attention. Eleanor, slightly unbalanced vacillates between anger at the suspicion and friendliness, desiring the friendship of the others.

Later in the novel, the bossy and arrogant Mrs. Montague and her companion Arthur Parker, the headmaster of a boys’ school, arrive to spend a weekend at Hill House and to help investigate it. They, too, are interested in the supernatural, including séances and spirit writing. Ironically, and unlike the other four characters, they don't experience anything supernatural, although some of Mrs. Montague’s alleged spirit writings seem to communicate with Eleanor. Mrs. Montague's lack of social skills provides another source of comic relief in the novel.

Many of the hauntings that occur throughout the book are described only vaguely, or else are partly hidden from the characters themselves.

Eleanor and Theodora are in a bedroom with an unseen force trying the door, and Eleanor believes after the fact that the hand she was holding in the darkness was not Theodora’s. In one episode, as Theodora and Eleanor walk outside Hill House at night, Theodora looks behind them and screams in fear for Eleanor to run, though the book never explains what Theodora sees.

By this point in the book it is becoming clear to the characters that the house is beginning to possess Eleanor. Fearing for her safety, Dr. Montague declares that she must leave. However, Eleanor regards the house as her home, and resists. The others have to practically force her into her car, but she is then killed when her car crashes into a large oak tree on the property. The reader is left uncertain whether Eleanor was simply an emotionally disturbed woman who has committed suicide, or whether her death at Hill House has a supernatural significance.

Perhaps not. Perhaps it was scarier when I read it as a teenager. Still, it stands at the paragon of modern horror novels, serving as the wellspring for most great haunted house novels such as The Shining and Burnt Offerings.

In redefining the subgenre of the haunted house, Jackson draws on the lore of H.P. Lovecraft and his use of odd geography. Especially in his Cthulu mythos, Lovecraft used bizarre geography to disorient his readers. In Hill House, Jackson does the same thing by pointing out that none of the walls are flush. None of them are at right angles. Views are obscured that should not be obscured. It’s an odd place.

We can see Jackson’s direct influence on Stephen King in The Shining. The Shining is a hotel with a unsavory past. Hill House’s past is not necessarily unsavory, but it is tragic and bizarre. In both cases, the main character – in The Shining, Jack and in Hill House, Eleanor, have a connection to the house. The house is a living organism that desires connection with these characters.

In Burnt Offerings, that connection is there as well, except that the entity has an embodiment and its own separate connection to that embodiment in the form of Mrs. Alardyce. The house draws the energy from the heroine as she works to restore it – and presumably Mrs. Alardyce – to their former glory.

Shirley Jackson shows that she’s no horror writing hack with her fantastic use of the English language. Her prose made critics overlook the fact that she’d authored a horror novel which, at the time of its publication in 1959, ranked below science fiction in the literary pecking order.

Consider the novel’s opening paragraph: “No live organism can continue for long to exist sanely under conditions of absolute reality; even larks and katydids are supposed, by some, to dream. Hill House, not sane, stood by itself against its hills, holding darkness within; it had stood so for eighty years and might stand for eighty more. Within, walls continued upright, bricks met neatly, floors were firm, and doors were sensibly shut; silence lay steadily against the wood and stone of Hill House, and whatever walked there, walked alone."

Never before in a horror novel has such a brilliant paragraph been woven to set the tone and the atmosphere. As Stephen King say in his essay about this book in his review of horror film and literature, Danse Macabre, a writer’s greatest achievement is a sentence or paragraph that is something greater than the sum of its words. This paragraph does just that.

Jackson establishes the personality of her main character quite well early on in the novel. Eleanor is a darkly dreaming woman. She’s not mentally stable and daydreams about all that is going on around her. Juxtaposed against the baldy, down to earth Theodora, and we see that Eleanor is going to be the house’s victim. Her mind is open. Her personality susceptible. How she will meet her end is the only question.

The Haunting of Hill House is not a particularly scary novel. But it is the wellspring of so much great horror, it’s almost a privilege to visit or revisit it and find where the masters of the haunted house genre drew their ideas. It is a wonderfully written novel with an interesting main character and an end just ambiguous enough to keep the reader thinking long after the novel’s conclusion.

The Haunting of Hill House was made into a movie two or three times depending on how you count. The first was the 1963 movie, The Haunting directed by Robert Wise. This movie is a nearly straight retelling of the novel and is a highly regarded horror movie. The second, The Haunting 1999 is a less than stellar effort high on special effects and short on story and does not do Jackson’s book justice. I also consider Stephen King’s screenplay, Rose Red to be a retelling of this story. King develops a different backstory for his mansion. But he includes almost all of Jackson’s story elements and closely enough resembles Jackson’s story to be considered a remake. It is better than the 1999 version, but not a particularly good movie.