The Circle By David Eggers

The Circle
By David Eggers
Copyright 2014

This dystopian novel, set in the near future, weaves a tale that demonstrates the perils and potentials of open sharing on social networks and Internet retailers. 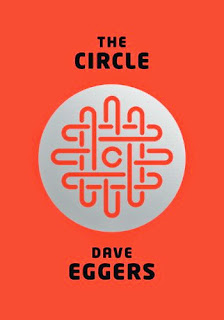 Mae Holland has just landed her dream job with The Circle, courtesy of her friend Anne. The Circle is an online retailer and social network operator with a sprawling campus near San Francisco that serves all of its employees’ needs. Mae starts in customer service, assisting Circle clients with problems of all types. She excels at her job.

Mae finds it difficult to acclimate to the company culture at first. She is chided for not being more involved in various company social events and in not responding to friends’ and coworkers online inquiries. She is encouraged to like and comment others’ posts in the social network and to post her own thoughts. Each employee is scored based on their social networking quantity and quality. After time, Mae eventually acclimates and excels.

The young go-getter finds herself juggling two relationships. One is with a tech geek working on a microchip implant for children to track them so that they may never be lost or kidnapped. The other is a mysterious employee of the company who manages to elude her most of the time in a company that preaches absolute transparency.

Mae’s new job brings a rift to her family life as he is able to see them less and less. They are brought on board Mae’s benefits plan to take care of her father’s illness and the company expects openness to the rest of the world from the Holllands – openness that as an old fashioned couple, they are not willing to provide. Mae asle encounters resistance from her ex-boyfriend who does not maintain a website for his business making chandeliers out of deer horns. When Mae displays some of his work on the net and creates demand for his product, he shuts her out all together.

The novel turns as Mae finds her life taken over by the Circle. She gives up her apartment and lives in the dormitory furnished by the company. She has another encounter with the mysterious boyfriend who leads her deep into the facility and shows her some of the company’s top secret research before they make love. She is intrigued and excited by him, but is unable to track him down within the company.

She decides to take a few hours of privacy for herself. After an uncomfortable visit with her parents where they refuse to open their lives up on the web for all to see and comment upon and a horrible argument with her former luddite bow who hates what she does and who she works for, she decides to stop at a kayak rental shack along the beach. The facility is closed, but she takes a kayak out anyway and explores a remote island.

When she returns, she is nearly arrested for theft and trespassing. She returns to company headquarters embarrassed and humiliated, quite sure she is going to be fired. She is summoned to the office of one of the three wise men. There they have a discussion about what Mae did. Mae learns her crime is not the stealing of the boats. Her transgression was not recording and sharing her adventure. Members of the Circle are expected to share every aspect of their lives.

Mae agrees to appear on stage with wise man Eamon Bailey for a public discussion of her behavior. There, she wows the crowd with her confession of theft by withholding sharing her experience and how she would do better. She agrees to live an entirely open life. Privacy is theft she concludes.

Mae lives her entire life, sexual and bathroom experiences, in front of a live audience of millions. The phenomenon spreads. Soon, politicians opt for this open life and those who refuse are ostracized. Mae becomes an international sensation for the change she brings to society.

One day, The Circle decides to send drones to find her reclusive, Luddite ex-boyfriend who chooses to live his life off the grid. When the drones arrive, he flees and eventually jumps from a bridge to avoid the scrutiny of the world.

Mae is unfazed by this development. Meanwhile, her family who had cameras installed all over their home to cover her father’s recovery from illness has covered the cameras. They refuse to take her calls. Mae is completely removed from her past.

Finally, the identity of Mae’s mysterious beau is revealed and he implores her to do what she can to stop The Circle from being completed. Mae finally realizes the moral bind she is in and makes her choice. . .

The Circle received tremendous reviews for its social commentary. Yes, while mildly dystopian, it is an accurate assessment of where society is headed in the digital age where some people are compelled to share every aspect of their lives via social media. And yes, it accurately depicts how online marketers snoop into our online activity to market directly to us. With all of this great social commentary, the book should have contained an interesting story. But it didn’t.

There is no character development in the story. To say that Mae and the other characters in this novel were wooden would be an insult to trees. They weren’t even plastic. They had no depth and were not even mildly interesting.

The story had no subplots. It was completely linear. The great mystery of the book – the identity of Mae’s mysterious love – was easy enough to guess because it could not have been anyone else with such linear storytelling.

Posted by Brian Schwartz at 5:37 PM