Caves of Steel By Isaac Asimov

Caves of Steel is the first novel (preceded by the short story collection, I, Robot) in Asimov’s Robots collection. The book represents an early example of genre blending where science fiction meets whodunit. 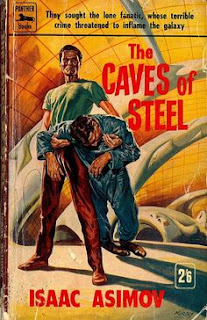 Roj Nemmenuh Sarton, a Spacer Ambassador who lives in Spacetown, the Spacer outpost just outside New York City is dead, having been murdered and his body badly disfigured. Elijah Baley, a New York City police detective is given the responsibility by his boss to find the murderer lest the tenuous relationship between the inhabitants of Spacetown and the outlying colonies take a turn for the worse.

To assist him, Baley is provided with a robot, R. Daneel Olivaw. Daneel so closely resembles a human that he is indistinguishable. He was created in the likeness of Sarton by Sarton himself, who was working to overcome Earth residents’ bigotry and restrictions on robots.

Asimov takes us through a few twists and turns in his futuristic murder mystery. Baley develops one theory and then another, disproving each eventually. He comes to suspect his own wife may be complicit. He moves through the underground of a New York City counter culture known as Medievalists who would have mankind start anew on another world. Eventually, Baley looks closer to home and, with Daneel’s help, finds his murderer.

What I love most about Asimov is his taut, tight prose that wastes nary a word in moving the story along at a quick pace. Asimov, a protégé of the pulp editors of the 1940s and 1950s, perfected his trade writing for magazines such as Astounding Science Fiction where readers did not want a lot of flowery language or five syllable adjectives. They wanted plot. They wanted action. And Asimov delivered.

It was not hard to figure out early on who the murderer was in Caves of Steel. This was not because of poor writing or plotting. Asimov just didn’t offer us a lot of suspects. He did give us a couple red herrings, but they were summarily dismissed with no ambiguity. This did not weaken the book because, just as with Robert McCammon’s Boy’s Life, the murder mystery was secondary to the characters and their relationship.

As he did in the short story collection, I, Robot, Asimov explores man vs. machine and what constitutes life. Philip K. Dick explored a similar theme in Do Androids Dream of Electric Sheep. But there, robots and humans were dedicated enemies and killed each other. In Asimov’s telling, robots are loathed, but serve as second class citizens on earth. Although Asimov alludes to it, we are never taken off world. But we know that the people there are more sophisticated and their attitudes toward robots is similarly sophisticate and not nearly as bigoted. Asimov leaves the reader believing greater interdependence is in store for humans and robots.

One hobby of even casual readers of Golden Age Science Fiction is to gauge the writer’s prescience about his future – our present. Some of those writers apparently put great effort into trying to be accurate even if they would not live to see their forecasts played out. I didn’t get the sense in any Asimov that he strived for this in a technological sense. His vision of the future as presented in Caves of Steel is not far removed from race relations in the South in 1953. So, I don’t think he was striving to be a seer here either. He did envision robots taking the place of humans in mechanical occupations such as welders and other manual labor tasks twenty years before it came to pass. While they are not robots per se, the computer has replaced many a file clerk and researcher in the police departments since the 1950s.

The murder mystery is a vehicle through which Asimov establishes the relationship between Baley and Daneel. It appears that they will soon be heading off world, perhaps in the company of Medievalists, fulfilling the late Dr. Sarton’s desire that more men leave the overcrowded conditions on Earth and move out into the planets.

To sci-fi fans, this book has no apparent weaknesses. It’s tight, fast paced, and well written. To the mystery fan – and my book club was anticipating mystery – this book leaves a little to be desired. While fashioned as a whodunit, it provides few suspects, few clues and few red herrings to challenge fans of that genre.

Caves of Steel is one of the great sci-fi works of the twentieth century and is recognized by those who do not normally read science fiction. Taught in literature classes at the high school and college level, the book has been read by millions outside of those dedicated readers of the genre. This is because Asimov was one of America’s great writers and Caves of Steel was one of his great works.

Posted by Brian Schwartz at 9:51 AM