The Years of Lyndon Johnson: Master of the Senate By Robert Caro

The Years of Lyndon Johnson: Master of the Senate
By Robert Caro
Copyright 2003 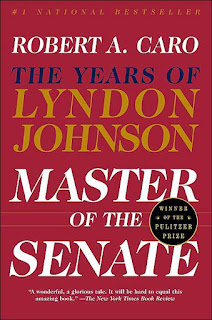 Caro opens his tome with a detailed history of the Senate; how its power ebbed and flowed in comparison to the executive branch and the lower chamber. Designed by the founders to be the world’s greatest deliberative body, it often rose to the occasion in the first 90 years of the republic. Soon after the Civil War, it was where good ideas went to die. Its power and influence waxed in the wake of World War I, but stood in the way of American foreign policy in the run up to World War II. By the time of Lyndon Johnson’s arrival in 1949, it was again a body of old men and little action.

The position of majority leader is relatively new in American politics. It is not a constitutional office like the Speaker of the House. It is purely political and its powers dictated by the rules of the senate. Caro documents the creation of this unofficial leadership position and how it ate alive its first holders.

With meticulous – sometimes too meticulous – detail, Caro describes the two seminal events in Lyndon Johnson’s senate career that put him in the national spotlight and set the stage for his unlikely rise to power in a legislative body where seniority is everything.

Leland Olds was a liberal’s liberal and head of the Federal Power Commission. An ardent New Dealer, Olds had frequently squared off with the oil and power companies who brokered Texas politics. Beholden to these interests, Johnson did their bidding in what many thought would be a routine confirmation hearing for another term for Olds.

Olds never saw the trap Johnson had laid for him as chairman of the subcommittee hearing his testimony. Johnson’s staff researched Olds’ youthful political affiliations and writings. Through this material, they were able to imply – without direct accusation – that Olds was a communist. When Olds tried to defend himself before the subcommittee, Johnson restricted his ability to testify and limited documents he could submit in his defense. With the New Dealer out at the Federal Energy Commission, the oil barons of the South were eager to finance Johnson’s political forays.

The other headlining event that defined Lyndon Johnson before the nation was the hearings before the Subcommittee on Preparedness. The committee was examining the U.S. military’s ability to wage war in Korea. Johnson and his allies on the committee ignored the rather limited scope of the United Nations’ police action and instead raised shrill alarm about how we were going into war without the full power of the nation’s military might behind us. With memories of World War II and a severe lack of preparedness, the public was alarmed. Johnson’s shrieks of alarm landed him on the front pages of several national news magazines and the New York Times.

As he did in the first two volumes of his Johnson biography, Path to Power and Means of Ascent, Caro diverges from this subject matter to present a thumbnail biography of important figures in Johnson’s rise to power. This volume documents the life of Richard Russell and looks extensively at his abortive run for the Democratic nomination for the presidency in 1956. Lyndon Johnson avidly supported Russell’s presidential ambitions knowing full well that the country would never support such an ardent segregationist for president. Russell’s efforts fell short, but he never forgot Johnson’s support. It became Russell's goal to see Lyndon Johnson elected president.

From his college days, Johnson was able to be all things to all people. To liberals, he was one of them. The conservatives, he was in their camp. The northern liberals of the Democratic Party like Hubert Humphrey supported him. The Southern Caucus counted him as one of their own. One would think he would have to declare some sort of allegiance to run for Senate Majority Leader. Instead, he would broker the unlikeliest of compromise between the two warring factions, courting Humphrey and letting Russell reassure the Southerners. Johnson was elected Senate Majority leader in 1954 after Democrats reclaimed the majority.

One of the many good ideas that had routinely died in the Senate since post-Reconstruction was civil rights bills. Congress had not passed one since 1875 although many had been proposed by the executive branch and several had been passed by the House. Every time such legislation made its way to the Senate, the Southern Caucus killed it through filibuster. Then came the Brownwell Bill which eventually became the Civil Rights Act of 1957.

Through several chapters, Caro describes the give and take and the brokering between northern liberals, southern conservatives, disinterested westerners, and Midwest Republicans. He gave everybody something they wanted. He cut from the bill the most onerous sections to appease Southerners. He delivered dams and other capital projects to Westerners. He promised liberals he and they would build upon this legally small, but politically monumental achievement. He showed Midwest Republicans how they might benefit with their growing black constituency. While the negotiations were tedious -- as was some of Caro’s narrative – Johnson managed to deliver on the first civil rights legislation in almost 90 years.

Caro promises an extensive examination of Johnson’s run for the presidency in 1960 in the next volume. However, he does chronicle some of what happened after Johnson’s ascendency to the vice presidency in 1961 and the man’s desperate move to hold onto power in the Senate.

When the Senate Democratic Caucus met in December 1960, Johnson convinced presumptive incoming majority leader Mike Mansfield to place his name into nomination to be chairman – an unprecedented move. The position was traditionally that of the majority leader. Democrats who had been foot soldiers and pawns in Johnson’s political machinations for nearly a decade balked. Some protested based on constitutional principles of separation of powers. Others balked simply because they were tired of Johnson pushing them around. Eventually, Johnson asked Mansfield to withdraw the nomination and Mansfield was elected.

Johnson spent the early days of his vice presidency in the Democratic cloak room. But those senators with whom he had been so intimate, who sought his advice and support, and whom he had harassed and cajoled, were now merely cordial. No longer were they clubby. Johnson was no longer a member of the club.

Caro certainly uses a lot of pages to cover just a few years of Lyndon Johnson’s career. But there is enough material on the history of the Senate and its workings and procedures to create a stand alone book.

This book should be required reading material for every U.S. Senator currently holding office and for those aspiring to the club of 100. They can look in the mirror and see themselves as those who are failing to uphold the once lofty reputation of that institution as the world’s greatest deliberating body. The Senate in the 1940s and 1950s before Johnson took over as majority leader was where great ideas went to die. ‘Tis so again today.

What makes Caro’s long tomes about this one man so interesting and engaging is his story telling ability. Some of that got lost in this book. While I understand what a monumental achievement it was to pass a civil rights act in 1957, my eyes sometimes glazed over during Caro’s microscopic examination of the legislative process. Yes, it does illustrate Johnson’s ability to wheel and deal, to cajole, to persuade. But chapter after chapter on the subject was a bit much.

Another element that got lost in this book was Caro’s ability to humanize this historical icon. The first two volumes told tales of Johnson’s personal life, of his relationships with friends, aides, and his wife. There was some of that in this book, but not nearly enough. There was too much focus on the legislative processes in the Senate.

Despite these minor weaknesses, Caro’s third volume of The Years of Lyndon Johnson is still compelling reading and illustrate this man’s striking ability to obtain and wield power with effectiveness. I look forward to the fourth volume where Caro will examine Johnson’s activities in the least powerful constitutional office in the U.S. government: the office of vice president.

Posted by Brian Schwartz at 4:23 PM