Writing fiction from an animal’s point of view is a tricky proposition for an author. It is difficult to do well and easy to do badly and very easy to do very badly. Assigning the human capacity to think and reason is the biggest pitfall. Some have done it well like Stephen King did with Cujo. Koontz does it quite well in Watchers. 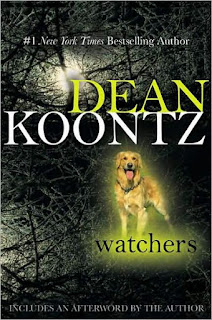 Travis Cornell is a former Delta Force unit alienated from life and the human race by a series of tragic events in his life. One day while hiking alone, he finds a stray dog running along a desert trail. The dog warns Travis that he is in danger and Travis and the dog flee the desert.

Travis soon learns that this is no ordinary Golden Retriever. This dog is special and the government is taking a strong interest in finding it.

Nora Devon has lived a sheltered life, hardly ever venturing into public. Repressed by her aunt that raised her, Nora gets nervous at the prospect of any human contact. After servicing her television, a television repairman starts to harass Nora, calling her and making suggestive comments and tormenting her. Nora lives her life in fear.

Vince Nasco is a Mafia hitman who delights in killing. He believes he is able to absorb the life force of those he kills and is striving for immortality. He is hired by the Soviets to kill scientists associated with Banodyne Laboratories – the lab that created the Golden Retriever named Einstein by his new master, Travis.

The lab also created another intelligent animal. While Einstein is an exceptionally intelligent, faithful, loyal dog, the creature known as The Outsider is a ruthless killing machine. The Outsider is loose as well, slaughtering people and animals across southern California with one goal – to find Einstein and kill him.

One day, while walking with Travis in a park, Einstein saves Nora from her stalker and Travis and Nora are drawn together. They both fall in love with Einstein and learn to communicate with him to unlock his secrets.

While slaughtering Banodyne scientists, Vince learns of Einstein and his wondrous abilities. Determined to find the dog, capture him, and sell him to the highest bidder, Vince also pursues the dog across southern California.

Travis and Nora fall in love and are married. When they return from their honeymoon, they find their home destroyed and Travis’s landlord dead at the hands of the other. They flee, assume false identities and move to northern California to flee from the federal government who is tracking both the Outsider and Einstein in hopes of capturing them.

Vince and the Outsider converge on the Cornell home at the same time and Travis, Nora, and Einstein are forced to fight for their lives against a sadistic mass murderer and a genetically engineered killing machine.

Watchers launched the career of Dean Koontz who had many books in print, but remained under the radar of most readers. Upon its publication, Koontz became a national bestseller of books and developed into a novel machine, publishing two – sometimes three novels a year for more than 30 years.

Too often, Dean Koontz is lazy with his character development. He often relies on a template character of the overachiever who overcome great childhood obstacles but is lonely in life. Watchers is different and that is part of what makes it special. When Koontz opens his book, Travis comes across as gruff, even callous. But as his relationship with Einstein and Nora develops, Koontz peals the onion to reveal a former Delta Force killer who is a broken human being on the mend.

Nora has a wonderful character arc. Koontz introduces her as a mouse of a woman. But she is no caricature. Early on Koontz reveals her as a complex woman. As she confronts her tormentor and develops a relationship with Travis and Einstein, she evolves nicely into a strong woman capable of violence to protect home and family.

Koontz’s treatment of the Outsider is masterful. As with his heroes, Koontz is capable of laziness with his villains and monsters as well and they often emerge as Snidely Whiplash like characters. The Outsider is a genetically engineered mutant bred for no purpose but killing. That would have been enough to sustain the plot. But Koontz makes the effort to make the Outsider tragic and almost sympathetic. This extra touch added tremendously to my enjoyment of Watchers.

Kudos to Koontz for writing an intelligent animal that didn’t want to make me gag. He did not write form Einstein’s point of view which helped by not having us read the dog’s thoughts and internal dialogue even though Einstein was capable of thinking, reasoning, and even reading. Einstein’s abilities are revealed slowly to the reader (and to Travis). This helps develop Einstein. While his abilities are fixed at the beginning of the story, the slow reveal makes it more plausible. As I stated, this is easy to do badly. Koontz did it masterfully and made Einstein as loveable as Old Yeller.

Watchers is well plotted with a masterful ebb and flow of story and character development scenes. The term page turner is used too often in rating and reviewing books, but Watchers was a compelling read. Never did I feel a scene was wasted. Every paragraph lent itself to the story.

The book is not without some small shortcomings. Koontz really works hard at developing the personal relationship between the county sheriff and the federal agent. He did it well and the reader felt the bond between the two and felt empathy for each. But both got short shrift from Koontz. The sheriff disappeared from the story without any resolution other than a final conversation in the final chapter of the book. The federal agent has an epiphany about the direction of his life (a writing cheat as egregious as ex deus machina) and falls away from the story until the final chapter where he serves no purpose other than to bring the story to a close. These characters deserved something better.

Vince’s aversion to sexual behavior is put out there before the reader, but never explained. Vince received enough character development to make him an effective antagonist. But deeper exploration of this facet of his personality which seemed important to Koontz since he brought it up so many times, would have made Vince a stronger character.

I would have enjoyed just a chapter or two – perhaps a prologue from the Outsider’s point of view. He was such a fascinating antagonist that just a taste of his interior dialogue would have been welcomed. Too much would have weakened the character and Koontz was careful to avoid that. But it would have been nice to know just a little more about this emotionally complex creature.

Koontz is always hit or miss with me. I love some of his better books like Watchers, Phantoms, Strangers, Night Chills and The Bad Place while absolutely loathing some of his later work like Cold Fire, Winter Moon, and Seize the Night I could not suffer through.

Watchers was a delight to read and ranks with Koontz’s best work. Great characters and a well told story always makes for a good book. Watchers is a damn good book.