The Night Boat is one of his early novels (third published, second written) that Robert McCammon had pulled from publication later in his career. His claim was that his earlier novels (including Baal, Bethany’s Sin, and They Thirst) were him learning the craft of reading and did not reflect his best work. 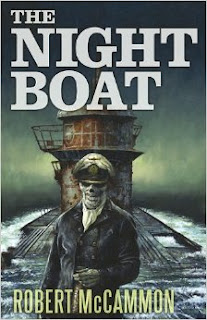 This was a rash decision by McCammon. While These books are never going to compete with his great works like Swan Song and Speaks the Night Bird, they are not bad books. Some are better than others, but all are entertaining.

That said, The Night Boat is probably the least of these books.

Diver David Moore is diving on a Caribbean wreck when he spots a giant craft covered by sand on an underwater ledge off the coast of a small Caribbean island. He accidentally releases the derelict Nazi sub with an old depth charge, unleashing the undying fury of the evil inhabitants waiting in the depths.

The sub surfaces and is towed to a nearby shipyard where it is secured. David Moore and the island constable board her and see the horrible inhabitants come to life. Soon, the island is overrun by zombie Nazis with two goals: to feast on human flesh and to secure the supplies necessary to launch their sub and continue their mission to sink ships.

After slaughtering a number of island inhabitants, the zombies return to the shipyard where they install their new batteries, refuel their craft, and set sail for the shipping lanes.

One man, and old Carib who was injured in a Nazi attack on the island’s shipyard, vows revenge. He takes David Moore and a marine archeologist to see with him to stop the Nazis before they can resume their mission.

The Night Boat is entertaining reading with a plot that seldom lags. However, it suffers from a linear plot and lack of character development.

David Moore is developed adequately. We know his family drowned and he’s left New England and the banking system to operate a hotel in the Caribbean and forget his life. His backstory defines him and makes him a sympathetic character.

He’s the only one who gets any meaningful development.

Kip, the island constable, gets a little backstory. But he’s never made sympathetic. McCammon tries by revealing Kip’s fears and insecurities. That is usually a good device to develop a character. However, for Kip to be properly developed and emerge a true hero, he must offset those fears and insecurities with strong action. Kip ends up being a bystander to the climax.

A romance between Moore and the marine archeologist would have provided more heft to the climax when the couple are in danger. Instead, David is purely hands off, preferring to remember his dead family. The relationship between the man and woman thrown into the danger of being attacked by zombies and then pursuing a zombie Nazi sub in a brewing hurricane should have been more than platonic.

The man who emerges as the hero of the story – the old Carib – was a textbook example of ex deus machina. He did not emerge in the story until he was needed near the end. McCammon is a much better writer and that and could have come up with a way and reason for Kip or even Moore to emerge as the hero. Instead, McCammon invented a new character to serve as the tool of resolution.

Most importantly, McCammon never really develops his zombies. We know they are intelligent since they are able to repair their sub. We know they are evil since they are driven to destroy ships and life. We know that they are terrifying because they dine on human flesh. But, given their intelligence, the reader deserves to know something behind their motivation. Such development would have augmented their evil and the terror they created.

There was a lot to like about this story. McCammon really shows his horror chops in writing gore. None of the gore of the zombie attacks is gratuitous and all serves to show the cold hearted viciousness of these monsters. While not quite splatterpunk, the horror scenes are quite graphic.

McCammon develops his setting quite nicely. Most of us know the Caribbean islands as the tourist mecca with beautiful beaches and shops. McCammon reveals the real culture of the indigenous people of the Caribbean on an island where people work for a living. He develops their culture, their language and their superstitions to help drive his story.

The Night Boat was indeed a book by a writer still honing his craft. The book that followed (in order of writing) Bethany’s Sin, was much better in exploring motivations and character development. When he got to his fourth book, he was willing to take on horror on a large scale in They Thirst.

Despite being the work of a learning author, The Night Boat was fun. It was an original take on the zombie trope decades before zombies became the rage in horror. That alone would make it stand out if a more mature McCammon had written it today. The story works nicely and is an easy read.

Posted by Brian Schwartz at 8:59 PM