Book to Movie: The Beast from 20,000 Fathoms (1953)
Based on the short story, The Foghorn by Ray Bradbury
Screenplay by Lou Moerheim and Fred Freiberger
Directed by Eugene Lourie
‘
In 1953, Ray Bradbury was starting to become a hot commodity as a writer. He was a young and up and coming writer who spent several years writing for the pulps. The Foghorn was published in the Saturday Evening Post and was given the Hollywood treatment. It would be the second Bradbury story on the big screen after It Came from Outer Space which was released that same year. 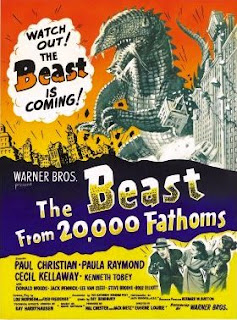 Apparently, Bradbury learned that the two screenwriters were working on a creature feature and reminded them that he had written a tale very similar to what they were working on. The credits say that the movie was based on Bradbury’s story. What is interesting is the movie bears no resemblance to Bradbury’s story. Well, a lighthouse gets destroyed. But that’s the only thing close to The Foghorn.

The beast, a Rhedosaurus, is awakened by atomic bomb tests at the North Pole. A scientist witnesses the creature’s awakening and, when he’s shipped back to the states, tries to tell people there is a massive lizard on the loose in the Arctic.

After a series of boat sinkings and reports of creature sightings slowly progressing south, Professor Tom Nesbitt finally convinces a scientist to dive in a diving bell and look for the creature. The creature finds the professor and eats him.

It then comes ashore in New York City and wreaks havoc, crushing cars, buildings and people in Manhattan. The Army attacks it with a bazooka and wounds it. But doctors treating the wounded learn that the blood carries pathogens causing horrible illness. He tells the military that they cannot burn the creature or spill its blood. Dr. Nesbitt determines the only way to kill it is with a rocket equipped with a radioactive isotope.

The creature comes ashore again in an amusement park. It attacks a roller coaster while Professor Nesbitt and an army sharpshooter ascend to the highest peak to fire the rocket. The shot is fired and the creature collapses. End of movie.

The Beast from 20,000 Fathoms has a really pedestrian plot that has been used countless times in creature features and horror movies past. One guy sees the monster and tries to warn others. His warnings go unheeded until the creature arrives.

In these movies, it is always the scientists and the military who are the heroes. The movie Them! which is probably the most highly regarded of the giant creature films utilizes this formula as well as Beginning of the End which is one of the silliest movies ever made. This played to the zeitgeist of the 1950s when the military and science were America’s strong suit and both institutions were held in high regard.

As shallow and linear as The Beast from 20,000 Fathoms is, it does hold the distinction of spawning a whole generation of giant creature features. While the plot left a lot to be desired, Ray Harryhausen’s special effects were top notch for the day and still look striking to us who loathe today’s CGI effects. Creatures like Godzilla, Mothra, the giant ants of Them!, and the Japanese children’s hero, Gamera, all appeared in the wake of this movie.

It’s not a Bradbury movie and the plot may put you to sleep. But, if you want to spend an hour and 20 minutes looking at a genuine trailblazing movie, The Beast from 20,000 Fathoms is worth the time.