R is for Rocket By Ray Bradbury

R is for Rocket
By Ray Bradbury
Copyright 1962

R is for Rocket
A young boy in Florida dreams of becoming an astronaut – a career one must be selected for. He and his best buddy discuss it and dream of it. Then, it comes true. 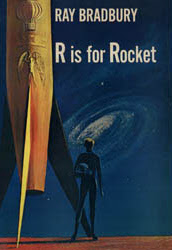 Bradbury writes syrupy sweet nostalgia better than anyone. Nobody captures the thoughts and emotions of the pre-adolescent boy with such remarkable accuracy as Ray Bradbury.

The End of the Beginning
A man and a woman watch anxiously as the first rocket into space to build the world’s first space station prepares to lift off. The man ponders the implications for how man divides his past from his present and what it means for man’s future.

This story is short on plot and long on philosophy and rumination. Today, it all seems trite and mundane. In the era it was written, I’m sure it was quite profound.

The Fog Horn
Two lighthouse keepers behold a giant, ancient sea creature drawn to the sound of a fog horn.

This story was a little long on reflection and a little short on plot for me.

The Fog Horn served as the basis for the movie The Beast from 20,000 Fathoms

The Rocket
A junkyard operator living on a shoestring budget has saved enough money to send one of his family into space. When they can’t decide, he buys a derelict rocket to take his five children into space. His wife is angry at him for spending all of their money and risking the lives of his children. At the end of their “journey,” she comes to see the beauty of it.

Short, simple and sweet. An ideal story for young readers to enjoy this man’s simple but elegant prose.

The Rocket Man
A boy recounts a trip his father, a rocket man who travels to the far reaches of space, made home. His father only comes home a few times a year and they are always special for the boy. His father makes him a promise: just one more trip into space, and he’s home for good.

Like most Bradbury fiction, the sci-fi is just a setting for human drama. The main character could have been a clipper ship captain in the 19th century and the story would not change one iota.

The Golden Apples of the Sun
A captain and crew of a spaceship fly to the surface of the sun to harvest just a cupful of the stuff that makes the sun go.

Like a few of Bradbury’s tales, the story is bogged down in too much waxing philosophic. That is the case here. I love the original idea of harvesting the sun. I didn’t need all of the introspection of the captain which filled three quarters of the text.

A Sound of Thunder
A man hires a company to take him back in time on a safari to hunt a tyrannosaurus rex. He is instructed that he must not leave the path and shoot only where and what instructed. When the time comes to shoot the dinosaur, Eckels panics and jumps off the path. The consequences are felt millions of years in the future.

This is perhaps the most well known sci-fi story in history. It is the most widely printed after originally being published in Colliers in 1954. Some believe it was the genesis of the term “butterfly effect.” The story was spoofed on a Treehouse of Horror episode of The Simpsons.

The Long Rain
A group of survivors of a rocket crash on Venus wander aimlessly in the endless rain, looking for a sun dome shelter to escape the rain. The constant rain drumming on their heads drives them crazy.

This is one of my all time favorite Bradbury stories, dating back to when I first read it in high school in The Illustrated Man. It takes something we all have in common – getting caught in the rain – and uses it relentlessly to build unremitting tension.

The Endless Rain was one of three segments adapted for the movie version of The Illustrated Man.

The Exiles
A crew of astronauts headed for Mars are beset with a series of problems. Unknown to them, a coven of witches on Mars are creating their problems. Also on Mars are the authors Edgar Allan Poe, Charles Dickens, Arthur Machen, Ambrose Bierce, Algernon Blackwood, and William Shakespeare. They live on because people read their work. But, they are dying because back on earth, their books are being born as hard science triumphs over imagination and their books are burned.

This is another story I first encountered in The Illustrated Man. The themes were easily identifiable with those raised in Fahrenheit 451. It could have easily been worked into The Martian Chronicles.

Here there be Tygers
When a woman puts on her best face, her best clothes, and sets out to charm you, you’d better notice. More importantly, don’t scorn her. The same can be said for a planet.

This story combined the best of what Bradbury offers as a writer. There is a great story with a familiar plot – men in a rocket landing on a new planet. There is also a lyrical quality to the writing that is poetic.

Here there be Tygers was made into an episode of the Ray Bradbury Theater.

The Strawberry Window
A homebuilder on Mars laments that his wife is lonely and misses her house and possessions on Earth. So, he has them shipped to Mars.

This story was waaaay long on philosophy and short on plot, character development, and anything else that makes a story interesting.

The Dragon
Two knights await the arrival of a dragon. The dragon never attacks in town. It only strikes down the unsuspecting people walking between towns. They hear its horrendous roar and see its one lone eye approaching fast. They prepare to do battle.

Ray Bradbury played a little joke on his readers with this one. The descriptive passages in this story soared.

The Gift
A family traveling to Mars aboard a rocket are forced to abandon their Christmas tree and presents at customs. With the holiday approaching the father must find a way for his son to celebrate.

Obviously this was a Christmas seasonal story, meant to inspire the Christmas spirit in sci-fi fans. It’s not without its charm.

Frost and Fire
Sim lives in a world where humans are born, mature, grow old and die in just eight days. In this world, the nights are bitter cold and the days are too hot to survive in the sun. Sim’s people arrived on this planet in spaceships, but just one spaceship survives from that time 10,000 generations ago. It is too far for people to reach in their limited life span. But believing the ship offers salvation for his people, Sim devises a plan to get there.

One of Bradbury’s finer tales this was. Easily could have been a novella or perhaps a novel. The characters were rich and deep and the plot chugged along at a wonderful pace, starting slowly and developing momentum.

Frost and Fire was originally published in Planet Stories, Fall 1946.

Uncle Einar
Uncle Einar is a flying man who has lost his sensory perception that enables him to fly at night after crashing into some power lines. Unable to fly during the day for fear of being seen, he marries and fathers children. He is reduced to serving as an umbrella and fan for his children on hot days. Finally, his children come up with a solution that allows him to fly again.

This is one of the Elliot family stories. Several of them were incorporated into a 2001 Bradbury fixup novel titled From the Dust Returned.

The Time Machine
In a time of increasing technology and machinery, three boys visit an old man with the promise of seeing a real time machine. Instead, they just find an old man. But it turns out HE is a time machine.

This story has the same theme that runs through Bradbury’s Green Town trilogy of the symbiotic relationship between the old and the young.

The Sound of Summer Running
A young boy sets his sights on a new pair of tennis shoes to wear for the summer. His dad tells him to save up his money. Instead, he goes to the shoe store and pitches the salesman a barter.

Bradbury wrapped up his collection of short stories with another of his romanticized tales of boyhood. Bradbury could wax nostalgic about every facet of summer and did in his Green Town stories. Green Town is not specifically named in this story. But it is easy to imagine this story taking place there.

Posted by Brian Schwartz at 6:09 PM