The Naked Sun By Isaac Asimov

Plainsclothesman Elijah Baley and his partner, R. Daneel Olivaw are together again to solve another murder – this time on the Spacer world of Solaria. 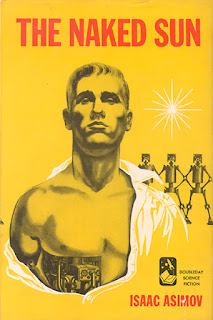 Elijah Baley is summoned to Washington, D.C. to meet with the federal government about undertaking an important mission. His services have been requested on Solaria to solve the murder of Rikaine Delmarre, the planet’s fetalogist. Joining him will be his partner in an earlier case, Daneel Olivaw.

There is another facet to their mission – one very much of interest to the federal government of the United States on Earth. While working the murder, they want Baley to observe and examine the inhabitants of Solaria and determine if the planet has any major weaknesses that might be exploited in the event of war.

Baley travels to Solaria and finds the culture there very different from earth. On Solaria, humans seldom contact each other. They live on isolated estates and are surrounded by robots that see to their every whim. People “view” each other with intricate viewing portals that provide the illusion of being in the same room. Elijah and Daneel are provided with their own estate and start their investigation by interviewing the widow of the late Dr. Delmarre.

Delmarre was murdered in his laboratory with apparently nobody but robots in his presence. It is impossible for a robot to have murdered him because of the first law of robotics that dictates that robots cannot allow or commit harm to a human. Delmarre was bludgeoned with a blunt object, but no object was located at the scene. His wife discovered his body, but no murder weapon was found. She emerges as the most logical suspect.

Baley isn’t convinced and undertakes the investigation. While he interviews the planet’s chief law enforcement agent, he nearly succumbs to a poisoning attempt. Again, only robots are in his presence. When interrogated, one robot shows signs of dementia, unable to speak clearly, indicating it had been tampered with or perhaps damaged.

He later travels to a natalogy center founded by Dr. Delmarre. He interviews his assistant who tells Elijah that Delmarre was working with a roboticist who was trying to alter the Three Laws of Robotics to allow robots to punish young children as they are being nurtured at the center.

Baley conducts his interview of the woman outside. This is because she only agrees to come within 20 feet of him, loathing human contact. Baley finds being outside disconcerting, coming from earth where humans live their entire lives in the caves of steel. While reeling from the effects of being outside, one of the playing children fires an arrow at Baley, nearly hitting him. He discovers the arrow is tipped with poison. Upon interviewing the child, Baley learns that a robot equipped the child with the arrow. The robot did not know that the arrow would harm Baley.

Baley then interviews the roboticist, Jothan Leebig. Leebig loathes human contact more than the average Solarian and can hardly stand to be in Elijah’s presence. Leebig confirms that he had a close relationship with Delmarre’s wife, Gladia. He also confirms that he was working on altering the positronic brain to allow robots to discipline children. He insists that he did not murder Dr. Delmarre out of jealousy or for any other reason.

After interviewing Gladia one more time and confirming the close relationship between Gladia and Jothan Leebig, Baley is ready to declare who the murderer is. He assembles all of the suspects via viewing, then starts the process of eliminating each one until he arrives at Jothan Leebig. He tells Leebig that his partner, Daneel Olivaw is there to arrest him and Leebig kills himself rather than have human contact.

What Baley does not reveal to the assembly is that Gladia had a hand in Delmarre’s death. While Leebig killed out of professional and personal jealousy, Gladia killed because her nature went very much against the social customs of Solaria. She liked the company of other people and could not stand the isolation anymore. Baley keeps this to himself and Gladia emigrates to the planet, Aurora where she can be free to associate with people.

Olivaw returns to his home planet of Aurora and Baley returns to Earth. Baley is a hero for returning with first hand knowledge of Solaria. Baley tells his fellow Earthers that Solaria is on its way to producing robots that can be made to indirectly harm humans as long as they don’t know they are harming humans. Baley predicts that this development may be a precursor for war.

The Naked Sun was as enjoyable as The Caves of Steel, but for different reasons. I enjoyed the whodunit aspect of The Caves of Steel more than The Naked Sun. However, Asimov dedicates nearly as much text to developing the culture of Solaria as he does to his murder mystery. It was learning about Solaria that I enjoyed about this novel.

As for the detective story, the murderer was not as identifiable early as he was in The Caves of Steel mostly because he was not introduced until later in the story. Once Leebig was introduced, it was easy to discern. Asimov did not provide any red herrings to throw off the reader. So, as a murder mystery, The Naked Sun was okay to the novice mystery reader, but would probably come across as amateurish to the connoisseur of mystery novels.

Being a writer who honed his craft writing for pulp magazines (The Naked Sun was serialized in Astounding Science Fiction and Fact magazine before publication as a book), Asimov writes with the leanest of prose. If you want beautiful descriptions of the scenery like you would find in a Tolkien book, you won’t find them here. Like a good pulp writer, Asimov focuses on plot.

Unlike many pulp writers, Asimov does take time to develop his characters. Baley was already fleshed out a great deal for us in The Caves of Steel. He delves into Baley’s fears as an earthman traveling to a Spacer planet, his fear of inferiority to the Spacers, and the fact that he really misses his wife and child. He has also come to accept Daneel as a partner, but not as a full partner. When one of the Three Laws of Robotics kicks in and Daneel gets in Baley’s way, Baley is perfectly willing to turn the tables on Daneel and make those laws work against him to get him out of the way.

Daneel is just a little more than a marginal player in The Naked Sun. His actions only serve to define Baley as an outsider on Solaria, trying to shield him from the discomfort of being exposed to the outdoors, despite the fact that Baley wants to acclimate himself. At one point, Asimov has Daneel removed from the story – albeit in a fairly clever way – because Daneel isn’t really needed. This was the chief weakness in this book. In The Caves of Steel, we come to see Daneel and Elijah as equal characters, even if they are not equal in society. Asimov moves away from this in The Naked Sun.

The Naked Sun is the third book in Asimov’s Robots series if you count the short story collection, I, Robot. Next up is The Robots of Dawn, written almost 30 years after The Naked Sun. We will see Elijah Baley and R. Daneel Olivaw team up once again as a crime solving duo.

Posted by Brian Schwartz at 2:39 PM