They Thirst by Robert. R. McCammon

In his fourth book, McCammon takes all that he learned in writing his first three books to open up his writing horizons. They Thirst represents a giant leap forward in the scope of what McCammon was willing to take on as a writer. It’s also a pretty good book and, in 1981, was an original approach at the vampire trope. 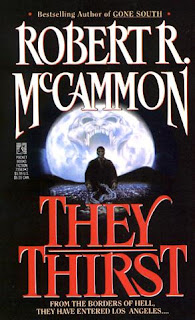 The book opens in Hungary, many years ago, with a little boy forced to confront a father who has become a vampire. Years later, that little boy has immigrated to the United States and is Los Angeles Police detective Captain Andy Palatazin. Andy has a problem: a serial killer known in the media as “The Roach.”

While Andy is pursuing The Roach, Prince Vulkan – King of the Vampires – has also immigrated to Los Angeles. His plan: Take over the country’s largest city and make it his kingdom. He settles into an ancient Hollywood mansion that once belonged to Orion Kronsteen – a legendary horror actor and begins “recruiting.” Cemeteries are torn up and the caskets are stolen while remains are dumped on the ground. People begins disappearing all over the city.

As Andy pursues The Roach, he comes to face the unpleasant truth the monster who terrorized him and his village in Europe has come to the United States in search of a bigger realm. Only he knows the truth, but making others believe it, he knows, will only serve to make them think he has cracked under the pressure of the job.

As the vampire hoard grows, they descend upon the neighborhood of 10 year old Tommy Chandler. Tommy watches as the vampires slaughter his family and he barely escapes with his life. Alone in a city haunted by demons, Tommy swears revenge.

Wes Richer is a nationally famous stand-up comedian with a girlfriend gifted with second sight. She forewarns that evil is coming and they try to get out of the city while they still can. Trapped in their car in an unprecedented sandstorm, the vampires hunt them and take Wes’s beloved, leaving him to stagger aimlessly in the storm. He vows to find his girlfriend.

Father Silvera is a priest in one of the city’s Hispanic neighborhoods. He wars with drug dealers, preaches to gang members, and tends to his church – all while battling terminal cancer. As he comes to understand the evil that is gripping his neighborhood and his city, he decides that it is to be the exclamation point on his withering life to meet the King of the Vampires and end his reign. First, he tends to his parish and goes out into the storm to bring back groups of survivors to the sanctuary. While out on a run, he finds Wes wondering aimlessly. Together, they resolve to go to Kronsteen Castle and take on Prince Vulkan.

Father Silvera, paired with Wes and Andy Palatazin, paired with Tommy Chandler make their way toward Kronsteen Castle as the sandstorm paralyzes what’s left of the city. There, they confront the ancient Prince Vulkan and his human sidekick, The Roach in a classic battle of good and evil.

Today, the literary landscape is adrift in urban fantasy novels where heroes and heroines confront the classic monsters of the genre. When McCammon did it in 1981, it was an original take on the vampire. Stephen King had already hit with the vampire working in a New England village. But as much as ‘Salem’s Lot had intimacy in its setting, McCammon’s They Thirst had scope. And, while ‘Salem’s Lot is the superior of the two novels, They Thirst is a great deal of fun. That They Thirst and ‘Salem’s Lot be compared is inevitable because Stephen King and McCammon ploughed a lot of common ground in the 1980s.

What They Thirst has that ‘Salem’s Lot lacks is a claustrophobic feel of isolation. McCammon spends two thirds of the novel getting his characters where he needs them, then puts them in an unrelenting, deadly dust storm. McCammon wordsmiths it beautifully to develop that sense. It is on that level that They Thirst works best.

They Thirst does suffer a major weakness and that is in character development. McCammon spends a lot of words developing characters and plot lines that peter out early in the novel. Tommy Chandler – central to the novel’s climax and resolution – does not make his first appearance until more than halfway in. Wes Richter and Andy Palatazin are well developed and the reader comes to care about them and their fate. Father Silvera and Tommy Chandler felt like late insertions necessary to make the resolution work.

Prince Vulkan is a rather foolish sounding name and brings to mind immediately Mr. Spock. McCammon writes the character well at the climax, but it’s not until we get there that the reader really feels pervasive evil. McCammon hints and feints at it through the text. But Vulkan needed much, much more to be really menacing.

“The Roach” however, was a fantastic creature. He was a bit stereotypical – having mommy issues. But the serial killer raising roaches to stuff into his victims’ mouths was really cool.

They Thirst was a major development in McCammon’s writing career. In Baal, he told a rather linear story that relied primarily on two points of view. He stepped it up a bit in The Night Boat, writing from a few different points of view. In Bethany’s Sin, we saw him undertake more points of view and develop a culture and undercurrent of evil. When he got to They Thirst, he was ready to use many points of view and take on writing destruction on a massive scale. Wiping out major population centers in a book is easy to do badly and brilliant when done effectively. McCammon doesn’t take on too much of the L.A. landscape and leaves to the imagination what he doesn’t write.


They Thirst is the fourth – and final – of McCammon’s “Condemned Novels” that he pulled from publication for a time. He felt they were not up to snuff and reflected a writer learning his craft rather than mastering it. I’ve said before, Mr. McCammon is way too modest. All four are good novels. They Thirst is the best of the four and can stand with anything written in the genre in the 1980s.

They Thirst pays homage and respect to the traditional vampire, sticking with the tropes that make this classic character work. Transplanting this ancient evil that is at the wellspring of horror writing into the modern American city was brilliant and has been copied many times before. Kudos, Mr. McCammon, on a novel well written.

Posted by Brian Schwartz at 1:01 PM