The Girl in the Spider’s Web By David Lagercrantz

It was believed by many that the Lisbeth Salander novels had died with their author, Stieg Larsson despite the fact that Larsson left behind an outline for a fourth novel. Eschewing Larsson’s outline, author David Lagercrantz took it upon himself to write a fourth installment. 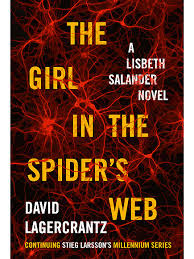 Magazine publisher David Bloomqvist is up against it again. Falling readership may mean a corporate takeover of his magazine and his removal from the editorial board. He is provided an opportunity for his next major scoop when he is contacted by a computer hacker with a story about the country’s most well know computer genius, Franz Balder. Bloomqvist is initially not particularly excited about the story until he learns of Lisbeth Sander’s involvement.

Bloomqvist contacts Balder who is, in fact, desperate to talk about computer and corporate espionage and his latest project. As Bloomqvist is arriving at the Balder home, Balder is shot in the head by a would-be assassin and his laptop stolen. Balder’s autistic son, of whom he has just taken custody, is the only witness.

Meanwhile, Lisbeth Sander is at her old hobby of hacking. Desperately depressed, she is searching for someone from her past, leading her to an underground hacking group known as The Spiders. While toying with the Spiders, she hacks into an NSA computer, putting herself on their radar.

Balder’s son, Augustus, is placed in a private hospital where he is to receive therapy for his autism. Bloomqvist is in contact with his family and is eager to follow up on some remarkable drawings the child has made of the murder. Meanwhile, Balder’s assassin, having left a witness behind, is eager to snuff out the kid. As the boy is about to be transferred to another facility, an attempt is made on his life. But Salander, having learned of a the attempt on the boy’s life in advance, rescues him in the nick of time. She spirits him away and with Bloomqvuist's assistance, hides him from authorities, his family, and his enemies.

Bloomqvist digs deeper into Balder’s past associations and finds out that The Spiders were part of the team who stole Balder’s research into quantum intelligence. Also complicit in the espionage was the NSA.

As the NSA is investigating the intrusion into their most cryptic systems, their lead investigator is inexplicably pulled off the case. Angry, he takes vacation and travels to Sweden to pursue Salander. He meets Bloomqvist whom he hopes can put him in touch with her. He tells Bloomqvist that the name WASP keeps coming up in his investigation and he links it to The Avengers comic book series and the superhero, Janet Van Dyne who founded the Avengers and the Spider Society. Their arch enemy was the Sisterhood of the Wasp.

Salander is holed up with the boy in a remote cabin. She nurses a bullet wound and is intrigued by the child’s mathematical ability. She hopes that his factoring of prime numbers might be able to assist her in her computer hacking efforts to track down The Spiders.

One evening, while walking home, Bloomqvist is approached by an exceptionally attractive young woman who attempts to seduce him. He sees through the ruse and manages to ditch her. He then talks to Salander’s former guardian who recognizes the woman as Salander’s twin sister. The sisters did not get along well as youngsters and Salander’s sister often goaded other kids to torment Salander. Camilla noticed Salander’s love for The Avengers comics and styled herself and her friends after Janet Van Dyne’s nemesis, the the Spider Society. Camilla is the brains behind the Spiders.

Eventually, the assassins catch up with Salander and August and they are forced to flee. Bloomqvist, taking the NSA investigator to meet Salander, come upon the scene. Salander has disposed of the assassins. August has drawn a picture of the man who killed his father and it is used to convict him.

Salander helps the NSA secure their network and, with her own method and means, helps August’s mother out of an abusive relationship. The story of U.S. government partnership in industrial espionage and computer hacking restores Bloomqvist’s position in his own organization. Meanwhile, Camilla and The Spiders escape justice.

I’ll give Lagercrantz and A for plot. The story is exciting. It is fast paced and the action impeccably written to allow the mind’s eye to watch it unfold like a movie.

I also admire the amount of effort and research that must have gone into writing the story. His knowledge of artificial intelligence, corporate espionage, and computer hacking make the story much more enjoyable as he lays it out in non-technical terms that allow the layman to enjoy the story.

Where he fails – and fails miserably – is in his character development. First, he introduces all of his characters up front. In the early part of the book, the reader is introduced to so many new characters and so many government agencies it is difficult for even the most perceptive reader to keep track of who is who and who works for who.

Lagercrantz employs a middle school character development device with too many of his characters. After the first paragraph introducing them, he follows up with a physical description and a biographical sketch. They teach you in high school creative writing to show, not tell. Given his ability to plot and write action, one must assume that he was just being lazy.

Worst of all, he destroyed the existing characters of Michael Bloomqvist and Lisbeth Salander. What made these characters – and any really good characters – great was their flaws. Flaws in major characters reflect humanity. Characters without flaws are superheroes. Superheroes are fine for comic books. They represent poor writing in mainstream fiction.

Bloomqvist – whose chief flaw is his amoral pursuit of women – suddenly and inexplicably develops a conscience about such things. Salander, who is unable to control her temper and her actions when she loses her temper, is suddenly given to forgiveness and second chances when dealing with August’s abusive step-father. This change in modus operandi is not explained.

Perhaps most silly is the injection of superheroes into the story of Michael Bloomqvist and Lisbeth Salander. At the novels ending, the reader could not help but think that Lisbeth would be squaring off with her sister in each and every novel, same bat-time, same bat-channel.

Lagercrantz was true to the vision of Steig Larsson in plotting this latest installment of Larsson’s anti-heroes. But in doing so, he destroyed the anti-heroes and made them superheroes. They have been reduced from action/adventure/espionage novels into comic books.

Posted by Brian Schwartz at 1:15 PM