Foreword 1: The Second Revolution by Isaac Asimov
Isaac Asimov, one of the masters of sci-fi, describes the evolution of the genre. Before the 1940s, sci-fi was mostly westerns disguised with ships instead of horses and blasters instead of pistols. This changed, according to Asimov, under the leadership of John W. Campbell who edited Astounding Science Fiction Magazine. Campbell demanded that science and plot be ingredients of the story. 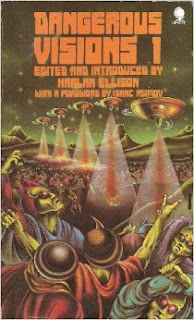 A second revolution came about in the 1960s after Sputnik was launched in 1958. This was led by author and editor Frederick Pohl who edited Galaxy Science Fiction. Under Pohl’s dominance of the genre, science fiction became edgier and more willing to engage in controversy, politics, and sex. It is from this new, edgier material that Harlan Ellison has drawn to create this volume while including some of the old masters like Fritz Leiber.

Foreword 2: Harlan and I by Isaac Asimov
Isaac Asimov relates how he met Harlan Ellison at a WorldCon in 1959 when Asimov was already a legend within the genre and Ellison was an up and comer and how Ellison put Asimov in his place. Once Asimov got full revenge, the two became good friends.

Introduction: Thirty-Two Soothsayers by Harlan Ellison
Harlan Ellison introduces his book by stating that these stories are all new and most are authored by new and up and coming writers such as Samuel R. Delany. What each story has in common is it is edgy. It is dangerous. Many contain sex which was a taboo in the sci-fi literature of the day.

Ellison takes time to rage at both those who insist that science fiction isn’t really literature and those who point to bad science fiction (he cites Planet of the Apes) as an example of how science fiction can be literature. According to Ellison, sometimes a story can just be a story without a message or socially relevant subtext.

Evensong by Lester del Rey
A being flees from an interplanetary group called the Usurpers. They have detection traps laid on every planet. When the being arrives on the Usurpers’ home planet that they have abandoned, he thinks he may have escaped them. He is wrong.

Deep questions about man’s place in the universe and the cosmos explored in blissfully short, but meaningful style in what del Ray says is pure allegory. Short on plot, but thick with meaning. Great story.

Flies by Robert Silverberg
Aliens take the remnants of a man from a spaceship explosion and rebuild him. They give him the ability to feel the emotions of others and transmit them back to the aliens so they can study humanity. But they accidentLly remove from the man HIS humanity.

I’ve not read a great deal of Silverberg, so I don’t have a standard of comparison to his other work. I suspect many stories in this book are going to be dark and Silverberg’s story is dark and cold and the main character devoid of humanity.

The Day After the Day the Martians Came by Frederick Pohl
Reporters gather in a cheap hotel in Florida to cover the return of a Mars probe that is bringing back some Martians. The hotel manager is forced to listen as the reporters trade stupid jokes about the Martians.

Thin on plot, this story is a commentary on racial jokes and how any race or nationality can be inserted into the punchline to made fun of. Not so thinly veiled, the metaphor was painfully obvious and bludgeoned home with the subtlety of a ball peen hammer to the forehead.

Riders of the Purple Wage by Philip Jose Farmer
In a future where everybody is guaranteed a wage and the state manages the daily lives of the people, artists are kings and critics their agents. Chib is an artist who desperately needs to win an art show to receive a grant. If he does not receive the grant, he will be forced by the government to relocate. His great great grandfather, who is hiding in his apartment as a fugitive from justice, offers advice.

In the postscript, Farmer says this is an appeal for liberalism in politics and society. I saw it more as a pitch for conservatism. I wanted so much to like this story. But the stream of consciousness writing style was frustrating. I hate reading James Joyce and I hated reading this.

The Malley System by Miriam Allen deFord
In the future, the most horrific criminals must relive their crimes over and over again on a daily basis as a means of therapy. The therapy is found to be effective with most criminals, but its founder meets an unfortunate end.

This story is brutal by sci-fi standards. Brilliantly written by an author who spent many years crossing over between sci-fi and crime, it works on a few different levels.

A Toy for Juliette by Robert Bloch
In a future world, A teenage girl is delivered toys in the form of people. She seduces them and then sadistically murders them. Grandfather is getting ready to deliver her latest toy and she waits with anticipation.

I’ve not read enough Robert Bloch for my taste because I really enjoy everything I read by him. This story reflects a beautiful mastery of a man who knows his craft. A little bit of sex, a little bit of violence, and a whole lot of anticipation make this story a joy to read.

The Prowler in the City at the Edge of the World by Harlan Ellison
Jack the Ripper, torn from his environment of London’s East End circa 1888, now exists in the world as it is in 3077. Having killed Juliette from the Bloch story, Jack becomes a surrogate for emotions for Juliette’s grandfather. He finds there is greater evil in the world than his own.

The Night that All Time Broke Out by Brian W. Aldiss
A couple living in the country has just had Time Gas lines installed in their house. This gas allows them to adjust their place in time to assure they are always in a happy time. However, there is a major leak somewhere which interrupts the flow. They investigate the source with tragic consequences.

Clever bit of writing on Aldiss’ part and a thoroughly enjoyable story. There is no particular dangerous vision here. Perhaps I’m just too far removed from the date of publication to ascertain what made this story cutting edge.

Posted by Brian Schwartz at 2:13 PM