Shipwrecked: Reflections of the Sole Survivor By Dennis Hale

Shipwrecked: Reflections of the Sole Survivor
By Dennis Hale
Copyright 2007

Neither Dennis Hale nor Daniel J. Morrell are household names. But to those who ply their trade in the Great Lakes shipping industry, both names are legendary. One died and one survived. 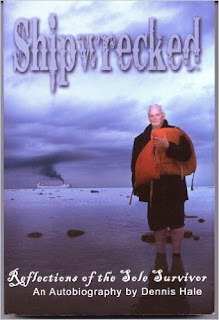 On the morning of November 28, 1966, Dennis Hale boarded the ore freighter, SS Daniel J. Morrell and sailed into history. That morning, the freighter departed Erie, PA, upbound for Minnesota to pick up a load of iron ore. Upbound with her was the SS Edward Y. Townsend.

That evening, the Morrell and the Townsend were caught in a storm. Running behind the Morrell, the Townsend sought shelter in the St. Claire River. The Morrell continued north to seek the lee of mainland Michigan in Thunder Bay.

Dennis Hale had finished his watch and was asleep in his bunk at about 2:00 AM when he heard a loud bang and the books fell from the bookshelf in his berth. Hale donned his skivvies and a pea coat and headed up on deck.

When he arrived, he noticed he could not see the ship’s stern. It was gone. The Morrell had broken in half in the storm. He and three fellow sailors gathered near a life raft, believing the boats had already been launched. They waited for the bow to sink. Before he disappeared, the Morrell’s master shouted to Hale and his colleagues that he did not have time to get a distress call out before power failed.

The ship’s bow sank and Hale was thrown from the life raft. He swam for it and his friends pulled him aboard. They thought they had sited a ship coming for them, but it was the Morrell’s aft section, still moving under power. They began to wait for rescue, believing the Townsend or another ship was in the area. The water temperature was 44 degrees. The air temperature was 36 degrees with wind gusts up to 70 miles per hour.

As night wore into day, the four men fought to stay on the raft as they went through troughs and peaks of waves up to 35 feet tall. One by one, Hale’s fellow sailors died of exposure. Finally, in the evening of November 29, Hale’s raft grounded itself about 100 yards from shore off the Michigan coast.

Hale struggled to stay alive as the last of his colleagues died. He fired signal flairs and listened for human activity on the beach. He heard none and nobody came looking for him. He slipped in and out of sleep and at one point, had an out of body experience that would later prove to be transformational for Hale.

Finally, on the afternoon of November 30, Dennis Hale was picked up by a Coast Guard helicopter dispatched to look for survivors from the Daniel J. Morrell. Hale was the only one found. He had been in the water for more than 36 hours.

Hale would spend more than a year recovering physically from the hypothermia and the frostbite. It would take almost a lifetime to recover from the mental anguish of surviving where his friends and colleagues had not.

After years of alcohol and drug abuse and failed marriages, Hale started speaking publicly about his ordeal. This he found much more therapeutic than visits to psychologists. In 2004, he accompanied divers and underwater photographers to the site of the Morrell’s bow where they filmed a documentary.

Dennis Hale would die of cancer five years after the publication of his autobiography. By all accounts, he died a happy and content man.

Between episodes of his harrowing ordeal of confronting the untender mercies of Lake Huron during the legendary gales of November, Hale tells of his life as a child. His mother died right after he was born. He went to live with an unloving aunt and sadistic cousin who moved Dennis from Ashtabula, Ohio to Los Angeles when he was in junior high.

For a layman with not even a complete high school education, Hale writes quite well. We know this because the book lacks editorial polish. There are a few grammar errors and some syntax that makes one groan. While the manuscript probably saw the hand of an editor once, not a great deal of time was invested in it.

Hale tries to make his entire life story interesting, but it really isn’t. I do not mean to disparage the man. But nothing in his tale gives us a glimpse into life in 1950s northeastern Ohio or Los Angeles. There is nothing in his life that influenced his choice to become a sailor on the Great Lakes. It is simply a narrative tool to break up the meat of his story into smaller chunks.

Ultimately, Hale’s tale is inspiring. It is one of bravery, healing, and redemption mixed with not just a little bit of luck. Since I first heard the story of the Daniel J. Morrell almost 20 years ago, I’ve wanted to learn more about the ship’s loan survivor. It is a tale that rivals that of the legendary crew of the Edmund Fitzgerald in the lore of the Great Lakes.

Hale’s book is a compelling read. A little more editorial polish with perhaps some editorial coaching during the writing process would have made it better. Still, it was well worth the time and a thoroughly enjoyable reading experience.