Roger Brown is king of the headhunters in Sweden. When the major corporations of northern Europe need to find a new CEO, it is Brown they come to. 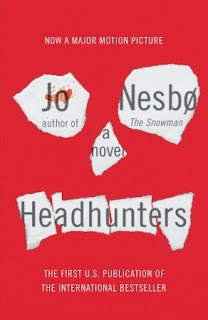 Brown makes good money, but he’s living beyond his means. His wife, whom he cherishes, owns an art gallery that is bleeding money. To make ends meet, Roger Brown moonlights as an art thief.

One evening, at a showing at his wife’s gallery, his wife introduces him to Clas Greve. Greve is retired military and a corporate leader par excellence. He will fill two roles in Roger Brown’s life. He will be a perfect fit as the new CEO of Brown’s latest client – a technology company specializing in global positioning, and he will serve as a source of Brown’s latest score as an art thief.

Brown learns that Greve owns an original piece painted by the master, Peter Paul Reubens – a painting that’s been missing since World War II. With the assistance of his security hacker, Brown breaks into Greve’s apartment and snags the painting. While there, a cell phone rings from under the bed. Brown grabs the phone and immediately recognizes it. His reality has been shattered.

The next morning, he goes to get into his car and finds his security expert has been poisoned with a needle trap on the driver’s seat – a needle trap exactly like the one Clas Greve described in one of his war stories. Brown flees his home and his wife, fearing that Greve is onto him and wants to kill him.

From then on, Brown and Greve play a game of cat and mouse through the Swedish countryside and through its cities until they meet for their final confrontation and a scheming Brown pulls out all the stops to free himself of Greve and all his past crimes. In doing so, he learns Clas Greve's true motive for trying to kill him.

This was another selection of my book, scotch, and cigar club. It comes on the heels of another Swedish thriller, The Girl In the Spider’s Web. The fourth in the Millennium series based on Stieg Larrson’s characters wasn’t a great book. But it was a masterpiece compared to Nesbo’s offering.

The biggest weakness of Nesbo’s book was, he just couldn’t figure out what he wanted it to be. It started out as if it were going to be corporate espionage. Then it turned into a caper. Then it was a chase story full of action and adventure. Then it became a techno-thriller. Yes, a good story can incorporate some or all of these elements and be great. But, to be great, the elements must be developed. Just as a segment of the story would become interesting, Nesbo switched gears on the reader.

Nesbo develops Brown quite well and Greve adequately. None of the other central players got the development they needed or deserved to make the story more interesting. Brown’s life is centered around his wife. Yet, she is developed not at all. That devotion, such as it was, would have given Nesbo’s twist so much more impact.

Speaking of twists, Nesbo had a great idea for a twist, but executed so poorly the reader feels cheated. When you write a twist, you give the reader a clue without the reader knowing he’s been given that clue. Then, when the twist is revealed, it should obvious – painfully obvious – to the reader, that he missed the significance of that clue. Nesbo cheats. He gives no clue. He just springs a twist on the reader because it’s easy.

Headhunters inspired a 2011 film of the same name. With a 7.6 star rating on IMDB.com, it is apparently held in high regard by those who saw it. I can see the book working as a film since the various story components Nesbo failed to develop to their fullest don’t require nearly as much development in a screenplay. I have not seen the movie.

I can not recommend Headhunters. I thought so little of it that I would encourage people to see the movie, sight unseen, rather than encourage them to read this dud of a book.

Posted by Brian Schwartz at 2:52 PM