The Years of Lyndon Johnson: The Passage of Power By Robert Caro

The Years of Lyndon Johnson: The Passage of Power
By Robert Caro
Copyright 2012

Robert Caro’s most excellent biography of Lyndon Johnson moves forward with volume four of what is expected to be a five volume series. In The Passage of Power, Caro examines Johnson’s vice presidential years and his advancement to the ultimate office following the assassination of John F. Kennedy. 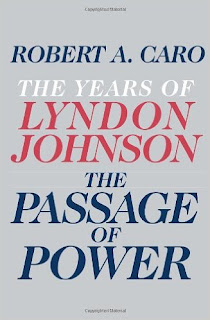 Before he was elected vice president, Johnson aspired to be president. But he was hesitant to seek the office, perhaps fearing loss and humiliation. When he entered the race for delegates, he was too late and he miscalculated. He relied on senators who he thought could control their states’ delegations. Kennedy relied on governors who actually exercised more influence.

When they went to the convention in 1960, Johnson was way behind in declared delegates, but still in position to challenge Kennedy. But Kennedy’s money, stellar organization, and natural charm won out. Much to the consternation of brother Bobby Kennedy, JFK asked Johnson to be his running mate. The move was less about uniting the party and more about winning the south, especially delegate-rich Texas.

Johnson campaigned almost exclusively in the South. It was during the campaign that Kennedy’s team of Harvard-educated advisors started making fun of Johnson and his lack of education and sophistication. “Cornpone” was the nickname the assigned to him. The nickname would stick through the Kennedy administration.

It was Johnson’s knack for “finding” votes that secured Texas for Kennedy and along with “found” votes in Illinois, this secured the election for Kennedy and Johnson. If Johnson was hoping for some significant role in the Kennedy administration, he was to be disappointed.

Kennedy kept Johnson at arm’s length. According to Caro, this was to keep Johnson from consolidating power. Caro has noted through his biography Johnson’s ability to find power where others can’t or don’t. The astute Kennedy was aware of this ability. Many thought that Johnson may have been helpful in advancing legislation given his knack for advancing the legislative process. But Kennedy feared that Johnson would be able to control the Kennedy legislative agenda. Kennedy would not even accept advice from Johnson.

Caro details wonderfully the Cuban Missile Crisis and the Kennedy response to it. Kennedy’s advisors were split among hawks and those who wanted a more measured approach. Early on, Johnson was part of the debate and came down on the side of the hawks. But Bobby saw to it that Johnson was marginalized and eventually shut out of the debate.

Caro also details meticulously the relationship between Johnson and Bobby Kennedy. This was a relationship of mutual hatred. Johnson had made some negative remarks about Joe Kennedy during the campaign and Bobby – ever loyal to family – never forgot. As one Kennedy loyalist was to say, “When Bobby Kennedy hated you, you stayed hated.” Johnson made a few efforts at reconciliation, but Bobby wasn’t having it. Bobby openly demonstrated his contempt for Johnson in cabinet meetings and in remarks to associates.

As Johnson became more and more marginalized, he became sullen and withdrawn. Reporters who once sought him out for insight into beltway shenanigans no longer called. At cabinet meetings, he seldom offered opinions or advice. He was a miserable man, stripped of power and trappings.

Of course, all of that changed on November 22, 1963. Caro again shows his brilliant writing chops as he describes the drama and trauma of those events and the days that followed. The Johnsons accompanied the Kennedys to the hospital after the shooting. Johnson was squirreled away in a small conference room with just a couple aides when he found out that Kennedy had died and he was the new president.

Caro provides blow by blow, vivid descriptions of what went on aboard Air Force One immediately following the assassination. Johnson, now in full control, orchestrating his swearing in, insisting that it happen there and now to assure continuity of government. As they took off, Johnson pleaded with Kennedy men to stay on with the new administration to help that continuity. While he got no hard commitments, most eventually did stay on.

Back In DC, Johnson set up his temporary headquarters in the Old Executive Office Building next door to the White House with just limited space. It should have been chaos, but the old Lyndon Johnson, who was always so firmly in control when crisis hit, managed his team and saw to it that the transition of power went smoothly. One cannot help but admire him for the job he did in those frightening days following the assassination.

Johnson prepared to address Congress. He knew John Kennedy was now a martyr for the causes he supported and Johnson was determined to see them through while putting his own stamp on the presidency. His address is perhaps one of the finest ever delivered by a president in the House chamber. His words were reassuring. His determination strong. His reverence of JFK immense. The nation and the world was much more confident after Johnson’s address.

Johnson and his team went right to work on advancing the two key pieces of the Kennedy legislative agenda. Those were cuts in corporate tax rates to spur economic growth and a civil rights bill with much more substance than any passed previously. Those old skills as a legislator were still there and Johnson went right to work on advising Congress how to get them dislodged from committee and on the floor of the Senate in the right order to assure a chance at passage.

His adversary early on was the venerable Sen. Harry Byrd of Virginia who was holding up the tax bill. A budget hawk, Byrd insisted on a federal budget of less than $100 billion. The proposed budget put forward by Kennedy was $104 billion. Johnson agreed to Byrd’s demands and Byrd responded by moving the tax bill forward.

In the House, the civil rights bill was held up in the Rules Committee. Speaker John McCormack was unable to force its release. Johnson organized a coalition of liberal Democrats and Midwestern Republicans to start a discharge petition that would overrule the Rules Committee chairman. Rather than face the humiliation of being overruled, the Rules Committee sent the bill to the full House.

The book ends as the fight for these two bills is about to commence in the full bodies of Congress. Johnson is enjoying remarkably high approval ratings. He is calm, confident, and happy. The Republicans are about to nominate the abrasive Arizona Senator Barry Goldwater as their standard bearer in 1964. Johnson is confident that he will secure the nomination, but the specter of Bobby Kennedy is still out there, perhaps waiting to steal it from him.

What is remarkable about this book is the transformation of Caro from a Johnson detractor into a Johnson admirer. Through the first three volumes of the series, Caro points out Johnson’s pettiness, arrogance, abusiveness, and overall hubris. That is absent in this volume. Here, Caro has nothing but praise for Johnson and his conduct.

While many dismiss a five volume work on the life of Lyndon Johnson as perhaps overkill – boring overkill, they are really missing out. While Caro chronicles the ups and downs of Johnson’s life and career, he also brings to life decades of American political history and drama. There is nothing dull about the story of this president whom history has yet to render its final verdict. He and Richard Nixon were the two most involved men in the postwar era of governance with their entire lives intertwined with that of the nation.

One point of historical contention that Caro addresses is the possible involvement of Lyndon Johnson in Kennedy’s assassination. Several historians are marginal ability have put forth this theory. With this biography establishing Caro as the foremost authority on the life of Lyndon Johnson, when he says he can find no evidence of such conspiracy, we can take it as accepted fact.

The Passage of Power is the result of meticulous research by one of the world’s most adept historians. It is the product of an historian who also has a flare for the dramatic in bringing the drama of world events to life. While one might criticize Caro for getting just a little too bogged down in legislative machinations, one cannot dismiss his narrative voice which resembles that of a gifted storyteller. The Passage of Power is one of the best presidential biographies you’ll ever read.