Timothy Zahn’s 1991 Star Wars sequel, Heir to the Empire was a huge hit at a time when Star Wars nostalgia was not yet vogue. He followed up in 1992 with the sequel, Dark Force Rising and picked up right where the previous book left off. 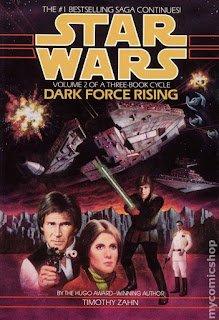 As Heir to the Empire closed, Admiral Ackbar was under arrest for treason. Han, Leia, Chewbacca, and Lando spread out across the galaxy to find evidence to exonerate him. First, Leia decides to undertake a diplomatic mission to Honoghr to meet with the Noghri who have pledged their allegiance to the Empire because of the earlier aid of Darth Vader when their planet was devastated.

Meanwhile, smuggler Talon Karrde has learned the location of the legendary Katana Fleet – a fleet of more than 200 dreadnought ships created by the Old Republic and lost when the crew was infected with a disease that drove them insane. The fleet, which is highly automated through a central control ship, is a valuable prize sought by both the Empire and the Alliance and could tilt the balance of power if found.

Han and Lando learn of the Katana fleet when they encounter Senator Bel Ilbis, a former Old Republic official who split from the Rebel Alliance after disagreements with Mon Mothma and has been waging his own independent war against the Empire. He is flying three of the dreadnoughts. Han, Lando, and Ben Ilbis’s people set out to capture the Katana fleet.

Luke goes to Jomark to meet with the Jedi Master, Joruus C’baoth. C’baoth wants to train Luke and is eager to bring Leia and her unborn twins to Jomark as well. Luke becomes C’baoth’s pupil, but finds the old Jedi master full of darkness and prone to treating people harshly. While Luke is training, Mara Jade arrives to plead for Luke’s help in rescuing Talon Karrde from Admiral Thrawn. C’baoth tries to keep them both there, but Luke and Mara effect escape.

Leia and Chewbacca are pinned down on Honoghr when Thrawn shows up looking for her to turn her over to C’baoth in exchange for his assistance. She learns that the droids assigned to restore the planet’s environment are making little progress and are actually spying on the Noghri. When Thrawn departs, she and Chewbacca are allowed to leave, but there are no promises of future diplomatic relations. She returns to Coruscant to fight on behalf of Admiral Ackbar.

Luke and Mara are able to effect Karrde’s escape from the Imperial star destroyer and the three head for the Katana fleet. On Coruscant, Leia debates Ackbar’s political nemesis, Counselor Fey’lya who tries to downplay the importance of capturing the Katana fleet. When Leia heads an independent mission and takes off for the Katana coordinates, Fey’lya leads a competing mission.

Han and Lando, with Bel Ilbis, are also heading to the Katana fleet. All of the groups arrive nearly at the same time. Luke, Lando, and Han are aboard the Katana flagship and find it deserted except for maintenance droids. When the Imperials arrive, they board the ship and a shootout ensues.

Leia and Fey’lya arrive and Fey’lya orders Luke, Han, Mara, and Lando placed under arrest. When Leia protests, he pulls a blaster on her and orders her arrest as well. Meanwhile, the Empire is deploying its fighters to engage the rebels and take the fleet. Leia is able to expose Fey’lya as a traitor and unite Bel Ilbis’s rebels with the alliance. But it is too late. Thrawn makes off with all but 15 of the dreadnoughts.

Mara Jade is nearly killed in the battle, but ejects from her ship at the last second. Luke and Han, still aboard the flagship, note with dread that all of the Imperial troops are the same person. Admiral Thrawn has located and used the Emperor’s cloning device and is building an army and crew to man his new ships.

Having dispensed with the need to deploy every tagline, catch phrase, and clever gimmick from the original moves, Zahn moves forward with what amounts to a pretty good piece of militaristic science fiction in Dark Force Rising.

Unlike Heir to the Empire, Zahn is able to stay true to the characters established and developed by George Lucas without using those trite catch phrases that made portions of Heir to the Empire a bore to read. Each main character acts as you would expect them too while undergoing further development at Zahn’s hand. While it is less important now with three prequels and a sequel out, in the mid-1990s, it was heartening to see these old friends again and watch them become deeper and richer.

New characters also undergo further development. Karrde comes across much less shrewd and much more wise. Mara Jade, who sometimes appeared to be a caricature of hatred in the first book, is revealed as much more emotionally complex and smarter than she appeared earlier. The major new edition in this book, Senator Bel Ilbis, promises to be an interesting character as well as it looks as if he will be a major player in book three.

The book evolves much as the movies did. Characters are constantly on the move from place to place. Luck – or the Force depending on your point of view – plays a major part in their success. There is quite a bit of ex deus machina, but we’re not talking about Bradbury or Asimov here. It is space opera in the tradition of the Saturday matinee with lucky breaks and cliffhangers abound.

The major drawback – or attraction if you are so inclined – is The Thrawn Trilogy and Star Wars in general is science fiction junk food. There is nothing intellectually nourishing here. The language is simple. While there are many subplots, there are few twists or hidden motivations. In other words, its true to George Lucas’s vision.

Zahn’s vision of the post-rebellion galaxy comes to a head in book three titled, The Last Command. Admiral Thrawn, with his new fleet and clone crew, will launch what he hopes will be the decisive offensive in his effort to wipe out the nascent New Republic.