The Last Command By Timothy Zahn

Grand Admiral Thrawn has captured most of the fabled Katana Fleet and has in operation the emperor’s cloning device. He decides the time has come to move against the New Republic and bring full scale war to the galaxy. He takes his first system with nary a fight by blasting the planet’s defense force with a turbo cannon while a cloaked ship fires at the same point from under the shield, making the New Republic wonder how he has acquired such firepower. Thrawn soon sets his sites on Coruscant. 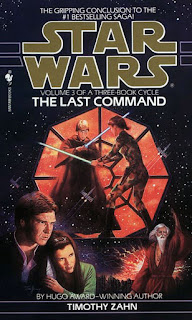 Leia gives birth to her two twins and cares for them in the emperor’s palace on Conruscant. Mara Jade is still a resident of the palace, staying there with Talon Kardde’s hacker, Ghent, who is working to find the mysterious Delta Source that is transmitting information to Thrawn from inside the palace. One evening, an imperial commando squad slips into the palace and attempts to kidnap Leia’s twins on behalf of Thrawn who wants to give them to evil Jedi Master, Jorus C’both. Mara is there to save the twins as well as Leia.

The lone surviving commando of the raid tells New Republic investigators that Mara Jade is Delta Source and assisted them with getting into the palace. Mara is put in prison. Han and Leia, knowing that Mara saved their lives and the lives of their children help free her. Mara then tells them where they can find the planet, Wayland and the emperor’s cloning device.

New Republic investigators determine that Delta Source must be a droid rather than human. Using all of the leaked messages, they determine that all of the conversations took place in a particular hallway inside the palace. They start their investigation of the hallway and the droids passing through, but Leia figures out the listening device is actually part of an ornamental plant in the hallway. Delta Source is shut down.

Talon Kardde tries to organize the smugglers into a coalition to fight the Empire. They hold a preliminary meeting that is interrupted by an imperial attack. The smugglers scatter and Kardde fears his efforts were for naught. He puts together another organizational meeting, but an uninvited guest shows up and accuses Kardde of setting them up at the last meeting so he can corner the market on smuggling. However, Kardde is able to turn the tables on the false accusations and win the loyalty of his fellow smugglers.

They decide to raid the imperial shipyards at Bilbringi. There, they hope to obtain a device that will allow the New Republic to locate and destroy cloaked asteroids surrounding Coruscant. Unbeknownst to the smugglers, the New Republic has the same plan and prepares for a sneak attack while feinting at the trap on another planet Thrawn has set for them.

Luke, Lando, Han, Mara, Chewbacca, the droids and a couple of their Noghri allies set off for Wayland. They arrive and find the mountain where the cloning device is housed to be heavily guarded by imperial troops. They find a back door and enter. Luke and Mara note right away that they are cut off from the Force. The place is full of the creatures, the Ysilarmi which have the ability to block the force.

Han, Lando and Chewbacca attack the imperial forces while Luke and Leia make their way to the imperial throne room in the top of the mountain. Han and his friends rig the cloning device to explode. Joined by Leia and Kardde, they head for the throne room to help Luke and Mara.

Luke and Mara arrive to find C’Baoth there and very much in touch with the Force. He demands that Luke and Mara join him as his pupils. When they refuse, Mara is stunned with an electric shock. Luke is forced to fight a clone of himself taken from the hand he lost on Bespin fighting Darth Vader. The clone (Luuke as he is called in the text) is armed with Luke’s old light saber. Luke wages a fierce battle with the clone. Han and Leia arrive on the scene and are immediately taken out of commission.

While C’Baoth is busy fighting all these battles, Mara attacks and kills him. She then kills Luuke – fulfilling her destiny set by the emperor during her time as the Emperor’s Hand to kill Luke Skywalker. The whole group flees Wayland as the cloning device is destroyed.

At Bilbringi, the New Republic forces come out of light speed to find that Thrawn has not fallen for their feint attack and has deployed his defenses at the shipyard. They prepare for a long, hard battle when they learn that the smugglers are already on the inside of the shipyard and ready to fight. Things still do not go well for the New Republic and their allies as the fight goes on. The tables are turned, however, when Thrawn and his second in command, Captain Palleon, receive word of the destruction of the cloning device on Wayland. When the forces there tell Thrawn that Noghri were part of the attacking force, Thrawn’s Noghri body guard kills him in revenge for the Empire’s mistreatment of the Noghri people. With Thrawn dead, Captain Palleon orders the withdrawal of Imperial troops from the shipyard.

When they return to Coruscant, Luke give Mara his old light saber and invites her to train as a Jedi.

This trilogy was a lot of fun, much like the original movies. The books predated the prequel trilogy and unlike those rather average movies, did not take itself too seriously. There are plenty of coincidences and ex deus machina to keep the fun and action flowing. But that really isn’t the point of these books.

As I stated: these books were fun. The original trilogy was fun. One went to see the movies to have fun and one picks up these books to have fun. To analyze them with the same strict parameters as one would serious science fiction or general fiction is to destroy the fun.

Fans of Star Wars overlook the many plot inconsistencies in the three original movies and prequels. We overlook the sappy story. We wallow in the Saturday matinee serial cliffhangers and ex deus machina plot resolutions. Would we have done this for something as deep as Close Encounters of the Third Kind, Alien, or E.T.? No. Those were serious science fiction. When the author and the material aren’t taking themselves too seriously, it is easy to just go along for the ride with the simple plot devices.

This is not to say that Zahn did not write these books well. He certainly did. I have not read any other Timothy Zahn, so I have no other work with which to compare. But I get the sense that he must write military fiction and write it well. The battle scenes and fight scenes were well paced and told with precision. Clever strategy and grand schemes were laid out and explained in detail. While the plot was fun, don’t dismiss how seriously Timothy Zahn took his subject matter in these books.

The Thrawn Trilogy, even with its simplistic plot and science fiction clichés, still made it onto NPR’s list of best science fiction books. It is there with lofty titles such as The Lord of the Rings, Dune, Childhood’s End, and the other paragons and cornerstones of the genre. That is lofty company indeed.

At the time these books were published, Star Wars nostalgia had not yet developed. Star Wars toys were no longer available in stores. There were no other Star Wars books. The movies remained very much fixed in popular culture, but it had not yet achieved the status it holds today. These books were the first next thing.

I recall first seeing them in a bookstore and thinking they could not be good. As a serious fan of genre fiction, I knew the movies were great movies. But I’d also read the novel adaptations of them as well as Alan Dean Foster’s Splinter of the Mind’s Eye. They were great when I was in sixth grade. I’m not sure I would enjoy them as much today.

My initial impression was wrong. These books are good. They are well written, well plotted, and fun, fun, FUN! They should be enjoyed by fans of science fiction and savored by fans of Star Wars.

Posted by Brian Schwartz at 1:45 PM