The Time of the Twins: Dragonlance Legends Vol 1 By Margaret Weiss and Tracy Hickman

Raistlin Majere aspires to be a god, supplanting the legendary mage, Fistandantilus and take his place in pre-cataclysm Istar. Crysania, the heir to the title of High Priest of Paladine has made it her mission to stop him. 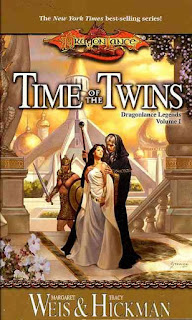 It has been several years since the end of the War of the Lance. Raistlin has disappeared to the Tower of High Sorcery and his twin brother, Cameron, has fallen on hard times of his own making. Cameron is an obese drunk, despondent over the rejection of his beloved twin. His wife, Tika, is embarrassed to have their old friend, Tanis Half Elven see him when he visits the Inn of the Last Home while escorting Crysania to meet their old friend, Tasslehoff Burrfoot who was to find a special person to aid Crysania in her quest to save Raistlin.

Tika has had it with the slovenly Cameron and kicks him out of the house, demanding that he find Crysania who has struck out on her own to head to the tower and plead her case for Raistlin before the council of mages at the Tower of Wayreth. Cameron leaves grudgingly with Tas and the gully dwarf, Bupu to whom Raistlin had once showed a great kindness.

Cameron and Tas eventually catch up to Crysania and they head for the tower. Just outside the grove that leads to the tower, they encounter the death knight, Lord Soth who is under the command of Raistlin and Cameron’s half-sister, Kitiara who aspires to usurp Raistlin in his plans and establish her own dominion. Lord Soth nearly kills Crysania before Paladine intercedes and takes her soul to safety.

Cameron and Tas arrive at the Tower of Wayreth where they learn of Raistlin’s plot to travel back in time to supplant Fistandantilus and make his bid for godship. The council resolves to send Cameron and Crysania back in time for a twofold purpose. Crysania’s soul can be restored to her there and together they can thwart Raistlin’s ambitions.

The spell is prepared and Cameron and Crysania are sent back in time. Tas accidently intervenes and is transported with them. Upon their arrival in Istar, Cameron is arrested, believed to have raped and/or assaulted Crysania who is unconscious. He is sold into slavery and made a gladiator. Tas is sold as well to the same owner and used as an errand runner.

All has transpired according to Raistlin’s design. He has Cameron sold into slavery so he can regain his strength and stamina to assist Raistlin later. Crysania is taken to the Temple of Paladine and is accepted as one of the priests. There, she meets the Kingpriest of Istar, a holy man of incredible power bestowed upon him by Paladine himself. She and the other priests live in awe of the Kingpriest.

Cameron adapts well to the life of a gladiator and comes to enjoy it because all of the deaths are fake and the matches are staged as pure entertainment. However, when he kills one of his opponents with a real weapon that was supposed to be fake, he is convinced that Raistlin, who has already supplanted Fistandantilus and taken his life force is behind it. Cameron decides he must kill Raistlin.

Meanwhile, Crysania’s new mentor and the other true clerics of Istar have been taken away to be spared the wrath of the gods coming in the cataclysm. She finds Raistlin in the High Priest’s chambers and Raistlin reveals the all powerful High Priest is nothing more than a scared but power hungry man. Crysania now knows that it is not within the Kingpriest’s power to prevent the cataclysm.

Storms and catastrophes start to sweep Istar in prelude to the coming cataclysm. Cameron tries to convince his friends to leave, telling them the city is about to be destroyed. Meanwhile, Tas has acquired from Cameron’s trunk the time traveling device with hopes of preventing the cataclysm. He goes to the Kingpriest’s chambers. He hears the Kingpriest’s pleas to the gods to give him the power to wipe out evil in the world. Crysania is there also. She is asked by the elven priest, Loralon to join him and the other true clerics of Istar to depart to safety. She refuses, hoping to save Raistlin.

Raistlin is forced to fight his friends in the arena using real weapons. To his dismay, he must kill them. As the cataclysm builds around him and the city starts to crumble, he races off the Kingpriest’s palace to kill Raistlin. He and Crysania, with Tas trailing them, have fled underground to Fistandantilus’ secret chambers beneath the palace. Cameron finds them there and is going to kill Raistlin when Crysania intervenes and allows Raistlin to complete his spell that rescues them all from the cataclysm and sends them to another point in time.

I first read The Time of the Twins upon its release in 1986 and immediately recognized it as superior to the earlier trilogy, The Dragonlance Chronicles. Weiss and Hickman, who had a long and fruitful writing partnership with TSR Hobbies, matured as writers between the first trilogy and the second.

While both are written at the level of young adult, Time of the Twins is more complex in its character development and subplots. Tas, who was often employed as little more than comic relief in the first trilogy, is developed as a much more noble creature. Also, great nuance is given to his natural desire to acquire objects that don’t belong to him. Cameron was pretty well developed in the Chronicles, but we get a better feeling for the man’s intellect rather than blind love for his twin. Crysania is a newer character who enjoys the most development in the first book. Her motives are quite complex and not entirely revealed to the reader.

Raistlin is the star of the first book even though little of it is written from his point of view. His character also becomes much deeper. The most poignant moment in the Chronicles was Raistlin’s charm of the gully dwarf, Bupu. This was the first hint that there was more to him than a grumpy, withered mage. The whole trilogy centers upon his lust for power. But, we find that even that lust for power and rejection of all human emotion can be cracked by affection and perhaps love for Crysania.

The city of Istar is presented wonderfully in its culture. Its imminent destruction is laid out nicely as a backdrop to the action centered on the characters. Too often, writers will ignore developing a suitable backdrop to their rising action to add to the excitement. Bravo, Weiss and Hickman.

I was disappointed in some of the unexplained actions in the book. No real reason is given for Tanis just giving up his mission to escort Crysania. An explanation would have been nice. The inn that was there and then wasn’t when Tas obtained the clues as to Crysania’s whereabouts was never explained. While Kitiara’s actions are sure to be covered in the second and third books of the trilogy, she is introduced, then dismissed for the rest of the book. The trilogy as a whole would have been better served to have woven her into the first third of the story.

To many fans of the swords and sorcery subgenre who enjoy Tolkien, the exploits of Elric, the turning of the Wheel of Time, or the Princes of Amber, Dragonlance is dismissed as lightweight Dungeons and Dragons tie-in and promotional material. That is too bad. While the works of Weiss and Hickman and the other authors who have written in the world of Dragonlance have created stories much lighter than those deep and weighty tomes, they are good stories that can be enjoyed for their wonderful storytelling.

Posted by Brian Schwartz at 6:53 PM