Childhood’s End stands as one of the most transformative and important novels in science fiction history. Written in an era when the Cold War was developing into something ugly and atomic weapons were new and scary, it touched a nerve with readers much like the movie, The Day the Earth Stood Still. 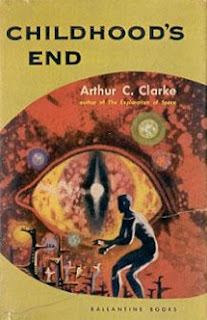 The novel is divided into three parts.

In Part 1, the aliens – or Overlords as they come to be called – arrive in ships that position themselves over every major city in the world. The Soviets and the Americans had been engaged in the Space Race, but that ceases with the arrival of the space ships.

After a brief period of observation, the aliens speak to Earthlings. The new supervisor of Earth, Karellen, tells the head of the United Nations, Rikki Stormgren, that the Overlords are going to assume control over international affairs to prevent war and save the human race. Otherwise, man is free to go about his business.

Many herald the intervention of the Overlords and the era of world peace they bring about. But a dissident movement arises. Stormgren serves as the only point of contact with the Overlords and while he has been to their ship many times, he has never seen them. While he does not approve of the dissident movement, Stormgren is eager to have the aliens reveal themselves to increase trust among humans. Karrelen tells him the time is not right.

After being kidnapped and held hostage by dissidents, Karellen agrees to smuggle aboard the Overlord ship a device that will allow him to see the Karrelen. The device works and Stormgren is horrified by what he sees. He then retires to a country estate.

In Part 2, the human race has moved on to an era called the Golden Age where creativity abounds, free of the strife of human conflict. The Overlords have revealed themselves and they fit the classic description of demons or the devil with horns, wings, and cloven hooves. They interact with the human race, albeit sparingly.

The Overlords have developed an interest in the occult and psychic research. While this field is considered passe by modern society, one man maintains an extensive library on the subject. Millionaire Rupert Boyce allows the Overlord, Rashaverek, to study his collection.

One evening, Boyce holds a party with Rashaverek as his guest of honor since interaction with an Overlord is considered a high honor. At the party, the guests hold a séance with a Ouija Board. Boyce’s brother-in-law asks the board to identify the Overlords’ home star. The board spells out the star coordinates. Meanwhile, one of Boyce’s guests faints.

Jan Roddick, Boyce’s brother in law, decides to stow away on an Overlord spacecraft to travel to their home planet. With the help of a brilliant oceanographer, Roddick constructs a container to stow away in and puts himself into suspended animation to survive the trip. At the end of the second part of the book, we learn the Roddick arrived safely and was discovered by the Overlords.

In the third and final part of the book, man is getting bored and many feel that creativity has languished in a life of total security. Several people split off from society and form an art colony known as New Athens. Among them are George and Jean Gregson. Jean is the woman who fainted at Rupert Boyce’s party. The Gregsons have been under the Overlord’s surveillance since that night. Her offspring are the seeds of man’s transformation to a higher plane of existence.

It all starts with the Gregson children. They display telekinetic powers and other special abilities. These abilities begin to manifest in other earth children. Deeming the time to be right, Korellen reveals the Overlords true purpose.

They serve a higher intelligence called the Overmind. The Overmind is an amalgamation of ancient intelligence culled from other worlds. The current children of earth are to be man’s last generation. They will join the Overmind and mankind will die out as a race. The Overlords were sent to earth to guide and observe.

Meanwhile, Jan Rodricks is on the Overlord home planet awaiting his return to earth. The Overlords explain to him the nature of their mission and tell him that, despite being servants of the Overmind, they can not join with it. They do not know why.

Rodricks returns to earth approximately 80 years after he left it. Mankind is dying out. Many have committed suicide. New Athens wiped itself out with a nuclear bomb. Earth’s children are communing mentally and testing their powers. They alter the moon’s rotation and orbit. They are evolving quickly.

As the last of the Overlords prepares to depart, having completed their mission, Rodricks agrees to stay behind and transmit his observations of the final stages of man’s evolution. Rodrick watches as the earth slowly dissolves into etherealness. He fills a great sense of fulfillment on behalf of man. He transmits his final thoughts to the Overlords, hoping that the information he provides will help them make that connection with the Overmind. The Overlords speed away from earth’s solar system, bidding a final salute to the race that was man.

Childhood’s End is heralded as one of the great achievements in science fiction and rightfully so. Clarke tells a grand story of huge proportions in few pages. The language makes the story accessible to readers of all ages and is uplifting in its theme. The book was awarded the Hugo Award retroactively in 2004.

Rodrick explores political and social subtexts in his novel. Written during the early, spooky days of the Cold War, the Soviets are clearly the bad guys in the beginning and the last to fall into line with the Overlords. The Overlords domination of man explores the age-old battle between security and liberty. Clarke never comes down hard on one side or the other, but lays out the arguments for both quite well.

Clarke examines how conflict, security, comfort, and creativity interact as well. One would think that, free of danger, man’s creativity would flourish. Deprived of the need to defend himself against murderers, muggers, and thieves, his mind would be free to explore all sorts of creative vistas. Not in Clarke’s mind and probably not in reality. Creativity and innovation often arise from conflict. Man has an inherent need for conflict in his life lest his intellect and creative impulses become stunted.

Arthur C. Clarke was obviously an optimist. And while he embraced atheism late in his life, this book contains spiritual elements worthy of exploring in a theology class. Near the end, Rodrick asks the Overlords if earlier encounters with man may have led to Christianity’s conception of the devil. Karellen responds that man’s conception of Satan is not memory, but a prediction of man’s ultimate fate stored in the brain of each person. His book ends with the ultimate spiritual achievement -- communing with the higher power. What could be more optimistic than that?

Exploring so many themes and containing so many subtexts within the short span of this novel is a remarkable achievement. Clarke, like all the genre authors of his era, was a product of the pulp magazines. When writing for these publications, words were at a premium. Each words and sentence counted. These men – and a few women – learned to hone their prose to get as much story into those few words as possible. The death of the pulps has made this nearly a lost art.

Childhood’s End is a must for any serious or even casual fan of science fiction. Stripped of all of the technical details today’s science fiction often gets bogged down in, Childhood’s End explores the very nature of what it is to be human and humankind’s place in the universe. It is nothing short of brilliant.

Posted by Brian Schwartz at 5:03 PM