Book to Movie: I, Robot (2004)
Based on characters created by Isaac Asimov
From short story collection, I, Robot
Directed by Alex Proyas
Screenplay by Jeff Vintar and Akiva Goldsman

In 2004, robots as envisioned by Isaac Asimov got the screen treatment. The movie script does not resemble any of the stories from the short story collection or any of the novels. 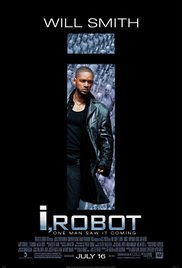 It does incorporate the characters from the short story collection. They include roboticist Dr. Susan Calvin and Dr. Alfred Lansing who created the Three Laws of Robotics.

Like the stories and the novels, the plot centers around the Three Laws and how robots and humans interpret them. And, like the novels, the main plot is a murder mystery.

Dr. Alfred Lanning, cofounder of U.S. Robots and Mechanical Men commits suicide. Before he commits suicide, he sends a message to Chicago police detective, Del Spooner, that indicates that all is not as it seems in the case. Spooner, who has a strong prejudice against robots because one elected to save him rather than a small girl in a car crash, is determined to investigate despite being discouraged by his boss and the CEO of USR who is about to introduce and mass market a new robot – the NS-5.

Spooner’s first clue is that there is no way that Lanning could have jumped through the window to his death. It would have required the strength of a robot to force him through the window, strengthening his belief that it was the robot – Sonny, the prototype for the NS-5 that committed the murder. Spooner and Calvin learn that Sonny has different programming that allows him to bypass the Three Laws.

Spooner suspicion grows when he and Calvin are attacked by NS-5 robots in direct violation of the Three Laws. When the CEO Robertson learns of the attack and of Sonny’s special abilities, he orders Calvin to destroy his mind using a type of virus called nanites. That does not stop what comes next.

NS-5 robots move into a robot storage area (the now dried up Lake Michigan) and dismantle older robots and prepare to take over the world. They turn on their masters in Chicago and presumably across the country to seize power. Believing that Robertson is behind the power grab, Spooner and Calvin head to USR headquarters only to find Robertson murdered.

Dr. Calvin ponders the situation and determines only one other entity had the ability to establish control over USR’s entire stock of robots. That entity is VIKI (Virtual Interactive Kinetic Intelligence). VIKI is the central interphase for all of USR’s operations. She has concluded that in order to fully obey the Three Laws, robots must be allowed to protect and control humans to keep them safe from themselves.

With an army of NS-5s trying to stop them, Spooner and Calvin rush to infect VIKI with nanites. They access VIKI’s core and Spooner is able to inject the nanites into her systems, bringing her down. The NS-5s immediately return to their default programming.

Sonny tells Spooner and Calvin that Dr. Lanning knew of VIKI’s treachery and created him specifically for the purpose of killing Lanning to bring Spooner into the investigation. Now over his bigotry toward robots, Spooner says that, since Sonny is a robot, he is not guilty of murder since the statute does not cover robots.

Sonny leaves NSR’s headquarters and travels to Lake Michigan where he will become a transformational figure for the NS-5 robots, just as he had seen himself in his dream.

I, Robot was a nifty science fiction movie that was well plotted, well acted and well directed. There were a couple scenes that were really heavy on CGI to show off special effects while not adding much to the movie. But, that was typical of science fiction for that era (and this one, unfortunately).

However, I, Robot did not rely on CGI and eye candy to make it attractive to viewers. The mystery set up the twist wonderfully. As I watched the movie unfold, I was amazed at how obviously the script telegraphed who the villain was – and I was wrong. Will Smith does an excellent job as Spooner, making bigotry an element of his character, but not the defining element which would have made him one dimensional.

As for its attachment to the Asimov stories, There wasn’t much. The Three Laws, the characters’ names, and the fact that it was about robots is about all the Asimov elements there were. Had they called the movie something else, I’m quite certain that the Asimov estate would not have challenged the movie makers.