The Fireman By Joe Hill

The Fireman
By Joe Hill
Copyright 2016

Fire in the form of Spontaneous Human Combustion is taking over the earth. People everywhere are bursting into flames with just moments notice. The precursor of the event is a golden skin rash called Dragonscale. Society slowly falls into hell. 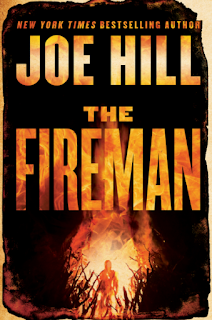 Amidst the chaos is a nurse Harper Grayson. She cares for the ill at work for many hours a day before returning to her home she shares with her boyfriend, Jakob. Harper compares herself to Mary Poppins with her unbridled positive attitude. Jakob is a bit more dour and is concerned about her work at the hospital and becoming infected. He makes a pact with her. If they become infected, they will not burst into flames as so many others have. They will end it with pills she will steal from the hospital.

One day at work, with the afflicted coming in in lines, a fireman brings a small boy to the front of the line and insists that he be treated first. The hospital security is about to toss him when Harper steps in and defuses the situation. The boy is afflicted, as is the fireman. The fireman leaves the boy in the care of the hospital.

Soon, Harper finds Dragonscale’s telltale marks on her arms. She also finds out she’s pregnant. Jakob is distraught and Harper does her best to keep it under control. But when the hospital where she works burns down, there’s nothing left for her to do except spend time with her husband at home except when he’s out working for the city road crews.

Harper decides that, no matter what, she is going to try to have her baby. She is not going through with the death pact. Jakob has different ideas and comes home to end it for them both. When a fight ensues, Harper escapes into the woods behind their house. There, she finds that same fireman who came into her hospital weeks before. He rescues her and delivers to a place called Camp Wyndham.

Camp Wyndham is a remote summer camp where people afflicted have come to hide from the incineration squads that now roam the streets. At first, Camp Wyndham seems idyllic with people caring for each other, standing guard, and providing food. They commune and sing songs which allows them to enter The Bright which is a sort of collective emotional state that brings piece and keeps the horrible effects of the disease at bay.

Things start to deteriorate at Camp Wyndham when Harper and the Fireman undertake a mission to rescue two men pinned down by an incineration crew near the local municipal complex. They are joined by the camp’s leader, Father Storey. The Fireman uses his ability to channel Dragonscale into creating great pyrotechnic displays to distract the crew and Harper rescues the men. However somebody bashes Father Storey over the head and sends him into a coma.

The camp is taken over by Father Storey’s daughter, Carol. Without a doctor, Harper is charged with the care of Father Storey. She is watched day and night by Carol’s lieutenants but still manages to sneak away to meet with the Fireman. They and a few others plot to leave Camp Wyndham and head for a place known as Martha Quinn Island (named for THAT Martha Quinn) where there is care for the sick, food, educational facilities, and civilization.

Before they can leave, they are betrayed. Father Storey dies and it is revealed that he was murdered and Harper is framed. As the camp is about to mete out the ultimate justice to Harper, the Fireman, and their coconspirators, they are attacked by an incineration crew led by the infamous shock jock, The Marlboro Man and Jakob. Harper, the Fireman, and a couple others escape the inferno and head for Martha Quinn Island.

They make their way across the scorched Maine landscape. This part of America is destroyed and most vestiges of society are gone. Still, they are helped along the way by people who leave out food and water. Meanwhile, Jakob pursues them relentlessly.

They finally have their showdown with Jakob and then make their way to the reception center for Martha Quinn Island. There, they find the ultimate betrayal.

There was a lot to like about The Fireman and I was entranced by this novel for about the first three quarters of it. Then, Hill start rushing his plot, and it sort of fell apart.

Camp Wyndham’s political and social dynamics were fascinating and kudos to Joe Hill for conjuring a multi-layered society where everybody’s motives are hinted at, but revealed in a surprising fashion. I felt there was something sinister going on in Camp Wyndham. It all seemed so innocent and pure on the surface and I thought perhaps I was seeing sinister intent where there was none. That kept me turning pages.

It falls apart after the escape from Camp Wyndham. The journey across Maine could have been so much more. I love writers who can bring a post apocalypse alive with vivid imagery and action. Hill never really develops that. The characters move and move and move. There are a series of actions written without feeling. There is no interaction with outside characters who could elaborate on what happened there. They do not visit any cities or towns that tell the story of the breakdown of society in the wake of the fires that scorched Maine. There was so much story left on the table here it hurt the novel badly.

The climax and twist were not telegraphed, but were easily guessed because it all seemed too good to be true. Again, it all seemed rushed. Captured, escaped, and rescued all quite quickly. We never learned anything about Martha Quinn Island’s development or why the pretense was developed. The villains were not developed. Their motives never explained. Again, a lot of story left on the table that could have added another rich layer to this novel.

Harper is a wonderful character. Hill develops her marvelously. You root for her. But the Fireman, for whom the novel is named, is rather one dimensional. There is no backstory to speak of. He does what he does because he needs to do it for the plot. He’s not developed as heroic, anti-heroic, noble, or anything. He’s just a tool to move the plot. This is the chief failure of the novel and a bitter disappointment.

Hill does doff his cap to a few who influenced him. The name, Camp Wyndham, is an obvious tribute to John Wyndham who authored Day of the Triffids – one of the great post-apocalyptic novels of all time. The Fireman, when it’s good, resembles Day of the Triffids. There is also a cat named Truffaut. This is a more veiled acknowledgement of Ray Bradbury who authored the best book about burning. Francois Truffaut directed the movie adaptation of Bradbury’s Fahrenheit 451. But why Martha Quinn? I guess only Joe Hill knows.

In anticipation of the book’s release, many were hoping for something similar to Stephen King’s The Stand. The Fireman is not in the same league as that book. King put as much effort into the single character, The Trashcan Man’s journey, as Hill did into the entire final third of his novel. King also provided a rich tapestry of post apocalyptic America. He explored its sociology, theology, and underpinned his tragedy with subplots and vignettes. Hill does none of that.

The Fireman was not a bad reading experience. I was riveted the first two thirds of the book and really enjoyed trying to figure out what was going on behind the scenes of Camp Wyndham. After that, it was quite unsatisfying and a letdown. It was a good story, but it could have been so much more.

Posted by Brian Schwartz at 4:18 PM