The Wolf’s Hour By Robert McCammon

What is a lycanthrope in the eyes of God?

Michael Gallatin, British spy and Russian werewolf. He reconciles his dual existence to become a hero of D-day. 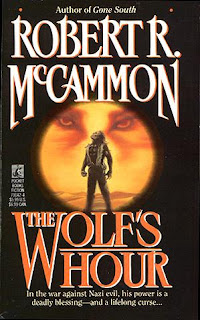 Mikhail Gallatinov is the young son of a Russian general loyal to the Tsar. One day, while his family is on a picnic in the Russian countryside, the Bolsheviks catch up with his family and assassinate all but Michael who is off in the woods. After the attack, the soldiers and Michael are attacked by wolves. The wolf spares his life and he is taken to a remote castle where he soon joins a small pack of lycanthropes who live there in secret.

Michael is raised by this pack, learning to hunt and learning all that he will need to eventually function in normal society including languages, mathematics, and history. Eventually, the Russian soldiers catch up with the pack and all of Michael’s new family is slaughtered. He escapes and makes his way to Great Britain.

Many years later, with his name changed to Gallatin, he is a retired British spy, having earned hero status in Libya during the desert campaign. While there, his lover is murdered by a German spy. Heartbroken, he retreats to his English castle.

He is approached by the British and Americans about infiltrating the German command to learn more about a possible attempt to thwart the D-day invasion. He parachutes into occupied France and, with the help of the French resistance, makes his way to Berlin. There, he is invited to a private club popular with the German high command, posing as a German baron and lover of a popular German film star who is part of the resistance.

With information provided by a French spy named Adam who tells him about an operation called “Iron Fist” he seeks out a German artist who assisted in the project, a chemical plant owner who makes deadly gas, and the man who assassinated his lover a few years prior.

Michael learns that the artist was hired to paint bullet holes on an aircraft. He also painted a caricature of Hitler on the plane, much in the style of American and British aviators paint the noses of their planes. He also learns that the Germans are developing a new, potent gas for an unknown purpose. Gallatin eventually puts it all together. The Germans plan to fly a plane disguised as a wounded American bomber to London where they plan to drop their horrible gas, killing the English in a most horrid way.

Before he can counter the Germans, he is captured and placed aboard a train by the man who murdered his lover in Libya. He is forced to run a deadly gauntlet of traps through the plane why the skilled hunter stalks him. Gallatin outwits him and escapes. He returns to Berlin and he and his fellow spies make their way to the remote island where the gas is being developed.

Once there, they launch an attack on the plant and are able to destroy it. But the shipment of gas has already departed, on its way to a Dutch airfield where it will be placed on the disguised bomber and delivered to London on the eve of D-Day.

The group travels to the remote airfield and confront the Nazis. The plane takes off and Michael and his friends pursue it in a German aircraft. An air battle ensues and Gallatin and his friends are able to eventually take down the aircraft and save London and the Allied invasion.

The Wolf’s Hour followed Swan Song in McCammon’s library and is a worthy successor. In Swan Song, McCammon perfected the art of creating memorable and unusual characters with Sister being one of the strongest characters I’ve ever read in genre fiction. Michael Gallatin is similarly strong.

Going into The Wolf’s Hour, I was anticipating a character who was torn apart and guilt-ridden over his duel existence. Instead, McCammon turned the cliché on its head.

McCammon’s werewolves are noble creatures who are persecuted and forced to live in isolation. They live and love as humans. They are educated and refined. The adult Michael Gallatin is far from guilt-ridden. He embraces who and what he is and uses it to his advantage. That is far removed from Larry Talbot and his tortured existence.

McCammon makes Gallatin into a Bond type superhero without allowing the trope to devolve into a foolish cliché. He sleeps with no less than four women in the novel. He reduces them all to putty in his hands. Along the way, McCammon shows us he has a real knack for writing effective erotica. Much like Bond, Gallatin escapes many impossible situations by outwitting his adversaries. The only thing Gallatin lacked was the Bond collection of fancy automobiles and gadgets.

The split narrative is employed effectively and enhances both timelines. Mikhail Gallatinov is developed as a young man of valor, honor and education and a wolf of cunning and great hunting skill. Michael Gallatin is developed as a loyal Englishman dedicated to helping win the war while also being the gallant hero seeking to avenge his murdered lover.

But The Wolf’s Hour is not a character study. It is a spy story blended with a horror novel, although the horror really plays a secondary role only used to enhance the spy story. Coming in at over 600 pages, the story seldom lags and the plot moves nicely. Like most McCammon books, the story relies on expansive geography, moving all over Europe. It does not quite rise to the level of splatterpunk a la Jack Ketchum, but McCammon shows he can be quite graphic in describing gore and violence.

The book’s one glaring weakness is at the end. The scene with Winston Churchill was just a tiny bit of overkill when the novel could have been effectively terminated several pages earlier. As a matter of personal taste, I like novels with short chapters. The Wolf’s Hour’s chapters were quite long. More frequent breaks are a better way to tell a long story.

The Wolf’s Hour was another step in the evolution of McCammon as a writer. In this book, he is moving away from the horror and supernatural genres into more mainstream writing. The Wolf’s Hour is primarily a spy novel. McCammon would continue to move in this direction with the publication of Mine, Boy’s Life, and Gone South.

The Wolf’s Hour does not quite achieve the epic status of Swan Song which is one of the finest pieces of genre fiction I’ve ever read. But it does stand as one of the top three books McCammon has written and is a fine and worthy entry into the werewolf subgenre, well worth reading for both horror and spy novel fans.

Posted by Brian Schwartz at 6:08 PM