The October Country By Ray Bradbury

The Dwarf
A dwarf comes to a carnival house of mirrors every night to stand before a mirror that makes him look tall. He inquires about purchasing such a mirror. The proprietor treats it like a joke and decides to play a joke on the dwarf. The consequences are dire. 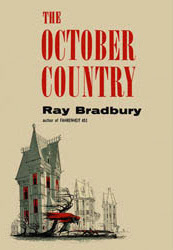 This is relatively early Bradbury. He’s established, but still having to prove himself to the pulp editors. So, much of the whimsy that has come to characterize Bradbury’s writing is not there. However, it is a strong narrative and has two strong characters and a decent climax.

The Next in Line
A couple are stuck in a small Mexican village where their car broke down. While there, they tour a mausoleum of sorts where the dead whose families can not afford burial or grave maintenance are stored. The woman is haunted to the point of exhaustion and wants to leave. But those repairs are taking so long. . .

I didn’t think this story was very well written. Yes, Bradbury makes us aware of the woman’s creeping terror. But what is the reason? The mummies? The atmosphere of the strange little town? What? Why? And the twist, such as it was, was limp.

The Watchful Poker Chip of H. Matisse
George Garvey is the world’s biggest boor, with a vanilla house, a vanilla job, and vanilla opinions on everything. He finds himself at the middle of an avant garde movement that worships the complete and totally mundane. When his popularity starts to wane, he finds sacrificing body parts and having them replaced with unusual prosthetics keeps him hip.

If there is a metaphor here, it is lost on me. The story itself wasn’t good, so Bradbury must have been striving to reveal some subtext. Perhaps it is lost on me or lost to the ages.

Skeleton
A man develops a horrible phobia of his own skeleton, regarding as a separate being living inside his body. He fears it, loathes it, and believes it seeks to betray him at every turn. He finally finds the right guy to help him.

This story displays Bradbury’s gift for using the English language for maximum impact. However, the maximum impact of this story was minimal because it just wasn’t a good story.

The Jar
A country bumpkin buys a jar with an oddity preserved in it from a carnival freak show. He buys it to be popular with his neighbors. His neighbors are quite curious and stop by night after night to ponder what it is in the jar. When his wife insults him by talking to the man from whom he purchased it, he puts a new item in the jar.

This is the typical Bradbury fare that so many of us fell in love with as children. It involves grotesqueries and murder. But Bradbury finds a G-rating way to present the material making it palatable, entertaining, and appropriate for children.

The Lake
A man recalls his childhood visits to a lake for vacation and one time when his 10 year old friend drowned. The body was never recovered. He returns, many years later, with his new wife to find that a lifeguard has discovered a long submerged body of a child.

This story was moody and sorrowful. Wonderfully crafted, the story exhibits Bradbury’s ability to eschew whimsy and embrace darkness and sorrow.

The Emissary
A young, disabled boy stays in touch with the world through his dog, with whom he has a psychic connection, and a neighbor woman who comes to visit him. The woman dies and his dog runs off, only to return later to gift his master.

Bradbury strived for the same moodiness as The Lake, but didn’t quite hit the mark here.

Touched with Fire
Two men make it their lives’ work to bring happiness to other people. After several test runs, they are finally ready to try their first real run. They find a woman who has an unhappy life at home and work. The men try to work their magic and fail. They are dismayed.

This was not a particularly strong story nor was it based on a strong premise. I could see that Stephen King had tapped elements of this story for his book, Insomnia.

The Small Assassin
As she is giving birth, a woman becomes convinced that her baby is trying to kill her. The new parents take their baby home and the baby keeps them up all night, leaving the wife exhausted. Then other events, such as toys left lying on stairs lead to new tragedies. The husband becomes concerned and consults the doctor.

This is the dark, Bradbury fare that belongs in a book called The October Country. This is straight forward horror the likes of a young Stephen King could have appreciated. Great stuff from one of the masters.

The Crowd
A man is injured in a car crash and marvels at how quickly the crowd develops at the accident scene. He becomes obsessed with gawkers at auto crashes and who they are. He eventually learns the truth and joins them.

This charming story was a favorite of preteens and teens. Simple and creepy, it works at that level and can be enjoyed by adults. It was made into one the absolute best episodes of the Ray Bradbury Theater.

Jack in the Box
A boy’s existence is confined to his house and he knows nothing of the world outside. He has a mother and a teacher who seems to live in his house. He sees the outside only through his windows. But one evening, his mother is killed in an accident and the boy goes outside to confront the world for the first time.

This story was incredibly dark without being violent or macabre. The creepiness of how this boy sees simple things such as grass and sky highlights the pervasive sensory deprivation of its main character. It felt like a haunted house story without the ghost. Simply one of the finest stories I’ve ever read.

The Scythe
A desperate farmer and his family come across a farm whose previous owner if found in bed, dead, holding a single stem of wheat. With him is a scythe. The family moves in and the farmer begins to harvest wheat, using the scythe. He finds that he wields no ordinary scythe, nor is he reaping any ordinary harvest.

Like Jack in the Box, this story had a dark feeling that Bradbury creates so well. The premise is unique and interesting. The plot clicks right along and the story wraps up fabulously.

Uncle Einar
Uncle Einar is a man born with wings. One day, while flying home to Europe from a party in Missouri, Uncle Einar hits some power lines and is knocked out. A woman finds him and they soon fall in love and settle on her farm. But afraid of being seen, Uncle Einar quits flying and becomes miserable. Then, one day, his children provide a solution.

This is a child’s tale. Were it not set in our time, place, and world, it would be a fairy tale. There’s nothing fundamentally wrong with the writing. But I was never a fan of fairy tales.

The Wind
A former adventurer is terrified by the wind. He believes that the weather is trying to kill him for having found the secret place from which all wind originates. He constantly calls his best friend with updates on his battle inside his home as the wind pursues him.

This is not the first story Bradbury has told about the weather being an intelligent, malevolent force. This one has a great sense of urgency and foreboding, making it an excellent read. It does not, however, measure up to the great short story, The Rainy Season from The Illustrated Man which makes one positively uncomfortable.

The Man Upstairs
A young boy watches his grandmother butcher chickens and becomes fascinated by what’s inside of animals. When a new border moves into the house who sleeps by day and works by night, he wonders if that man has the same stuff inside him that we all do. He finds out he doesn’t.

This one has the feel of the Greentown trilogy with the kid viewing older people as alien. The story is quite nondescript and the ending silly. A poor entry in this short story collection.

There Was an Old Woman
Death takes a stubborn old woman who refuses to die, leaving her soul behind to grouse about it. Determined to go on living, she goes to the funeral home to stop the mortician and reclaim her body.

I don’t mind Bradbury’s whimsy. I even enjoy it and embrace it. He tries whimsy in this story and just comes across as silly. I know this story is old. But this is a tired trope and Bradbury’s story is nothing new, original, or clever.

The Cistern
A pair of spinster sisters sit in a drab room. One sister works at her quilting. The other stares out into the rain and tells a chilling tale of a pair of dead lovers who reside in the storm sewers below the town.

This story had a somber and funereal narrative that created an appropriate mood for the reader. This and the next story, had they been more narrative and less dialogue driven, would have reminded me of H.P. Lovecraft in his Lord Dunsany phase.

Homecoming
Timothy is the oddball of the Elliott family (Uncle Einar’s family). He doesn’t like blood to drink, can’t fly or perform any other supernatural tricks. When his many generations of living family gather for a reunion, he wants to impress them with some ability to show he fits in. His telepathic sister plays a mean trick on him.

I’m not a fan of the Elliott family. Uncle Einar was not a particularly good story. This one had a little more emotion and a little less silliness. It worked much better than the earlier Elliott family tale.

The Wonderful Death of Dudley Stone
A fan of the writer, Dudley Stone travels to his home town to find out what happened to the great writer who suddenly disappeared from the writing scene twenty years prior. He finds Stone living a life of quiet and happy domesticity. Stone agrees to tell him of the incident that led him to quit riding and change his life.

There are a lot of stories like this about the reclusive writer everybody wants to talk to. King utilized it most recently in book 2 of his Bill Hodges trilogy, Finders Keepers. I once saw the trope employed on an episode of the sitcom, Frasier. Bradbury has no major twists or turns or anything sinister. The writer Stone just gained a new perspective on life.

Posted by Brian Schwartz at 7:20 PM