End of Watch By Stephen King

Brady Hartsfield is locked in Lakes Region Traumatic Brain Injury Clinic. He is a vegetable. He can speak only a few words. Has just a little bit of motor control. Can barely communicate with those around him. As long as he remains in that state, he will not stand trial for attempting to blow up a rock concert. 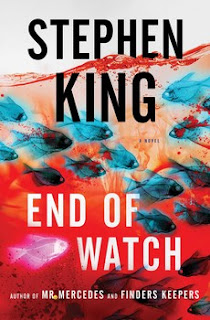 He has found a friend in an obsolete hand-held video game system known as a Zappit. He stares at the game – particularly a fishing game – for many hours at a time. It keeps him occupied while he isn’t using newly developed telekinesis abilities to move objects around the room.

A doctor has taken a strong interest in Brady’s case. He is giving Brady experimental drugs, hoping to restore Brady’s senses. But Brady turns the tables and uses new found abilities given to him by the doctor to make the doctor part of his army of revenge.

Bill Hodges and his partner, Holly are quite successful in operating their detective agency, Finders Keepers. However, Bill has been sick lately and losing weight. Pain in his side has sent him to a doctor and he fears the diagnosis and prognosis are not going to be good.

They are invited to the scene of a murder suicide involving a mother and daughter. The daughter, completely paralyzed, had been one of Brady Hartsfield’s victims in the attack with the Mercedes Benz. While at the scene, he locates one of the Zappit game systems along with the letter Z drawn on an electrical outlet. They learn that the mother used the Zappit game quite frequently.

Later, while Bill is at the hospital checking up on his old pal, Brady, Jerome’s younger sister is narrowly missed by a delivery truck she tried to step out in front of. Bill is there to talk to her and she tells how she got the Zappit from someone handing them out for free in exchange for completing a survey.

Soon, with Holly’s help, Bill uncovers a scheme that had all of the Zappit game systems shipped to his town after the company went bankrupt. Through Holly’s tracking, they are able to track a mysterious Mr. Z and Dr. Z to one of Brady’s old colleagues from the electronic store. From her, they learn that all the Zappits – many of which were put specifically into the hands of those who attended the concert several years before that Brady intended to blow up – are programed to hypnotize their possessors and drive them to a website to convince them to commit suicide.

Meanwhile, Brady has taken up permanent residence in the head of his doctor – Dr. Z – and has driven off into the country to watch the results of his plan. Using their resources, Bill and Holly are able to track him down to a remote, wooded location. There, they confront Brady and put an end to the insanity.

Bill admits himself to the hospital to get treatment for his cancer. But it is too late and the cancer too far advanced. Bill dies, leaving the business to his friend, Holly.

End of Watch was a fitting end to the Bill Hodges trilogy. The first book was a lot about plain old detective work and not really my cup of tea. The second had many twists and turns and subplots that kept the plot moving and would have worked as a fine stand-alone novel. However, the third is an excellent race against time against a cunning evil.

This book – and all the Bill Hodges books – are shorter than the average King book. Therefore, minor character development – for which King is so famous for – suffers some. However, where there might have been backstory, there was action. The book was seldom ponderous nor were the characters other than Bill that introspective.

The other two other main characters, Holly Gibney and Brady Hartsfield, received substantial development in the first book which may have rendered Mr. Mercedes somewhat less action driven than the other two. They didn’t develop much beyond that, but they didn’t need to. The evil Brady Hartsfield was already evil and cunning enough to set up his diabolical plan. The neurotic Holly never got better – which made her believable – but never backslid into deep neurosis when the pressure was on.

This book involved more technical research than most King books and it is apparent that King’s researchers provided him with adequate material to build a techno-thriller that worked on a technological level. King, who admits he hates research, certainly put forth the effort to learn this material so it might not be picked apart by techno-geeks.

Stephen King rolled a lot of ideas into this short novel. The concept of pure evil. The supernatural element of mind and body control. A high-tech conspiracy. The constant pain of his hero which, since his accident, has been a staple of King’s writing. The end came in an old fashioned chase through a snow storm. Congratulations on weaving so much into such an easily digestible book.

End of Watch does not work as a stand-alone novel, unlike Finders Keepers. To understand it, one must read the two earlier books. End of Watch is a fine climax to a fine trilogy and will stand as one of the better books in the King canon.