Mine by Robert R. McCammon

Mine
By Robert R. McCammon
Copyright 1990

It’s the 1990s of day traders, hedge funds, and multi-million dollar deals in the country’s financial centers. In the midst of all this, Laura Claybourne is a successful journalist married to a successful broker. They have a beautiful home with beautiful cars. The only hitch in their marriage is they never seem to have enough time to spend with each other to keep the marriage healthy. 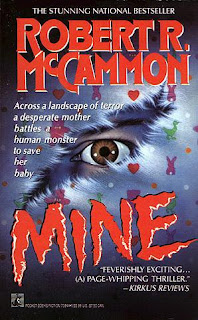 Laura Claybourne is pregnant with the couple’s first child. She has a happy life on the surface. Her husband, a commodities dealer in Atlanta, makes a good living and they have a good home. She is a society page reporter for a local newspaper. But she suspects that perhaps her husband is having an affair.

Mary Terrell – aka Mary Terror – is a sixties radical hiding underground. She was a soldier in an organization called The Stormfront. The Stormfront waged war on the establishment, killed cops and bankers and blew up buildings. They were high on the FBI wanted list. One night, the cops stormed their headquarters. Only a few made it out, including Mary and their leader, Lord Jack. They all flee separate directions and off to different lives to live underground. Mary Terror is a sleeper agent, waiting for the summons to rejoin the Storm Front Brigade.

Through a message in the Rolling Stone Magazine, Mary – Once known as Mary Terror – has seen an advertisement for all remaining members of the Storm Front – a 1970s radical group who fought the establishment through a series of murders and bombings aimed at ending the capitalist system of government. Their Leader, Lord Jack, has summoned her. She must have his baby ready when she meets him in New York.

As Laura moves into the ninth month of her pregnancy, she starts to get suspicious of her husband who has to make himself scarce so often in the evenings, leaving her alone. One day, she decides to call her boss’s husband who can not confirm her husband’s story of being out with a client. Eventually, Laura puts it together by following him one evening to an apartment complex where her husband goes upstairs with a six pack of beer. She has some thinking to do before the baby arrives.

Mary has her own thinking to do before her meeting with Lord Jack. When she last saw Lord Jack as the pigs were shooting up their apartment in New Jersey, she was pregnant with her child. In the process of escaping, she lost that baby. Losing a baby would not be acceptable to Lord Jack. Mary wanted to present him a beautiful child as their son. She has practiced caring for a baby on dolls, and it always ends badly. Now she needs the real thing.

Laura finds the evidence that proves that her husband is having an affair and throws him out. A short time later, she goes into labor and goes to the hospital with her husband and parents.

Meanwhile, Mary has acquired some guns and a costume that will allow her to get into the hospital and steal a baby. Dressed as a nurse, she slips in and takes Mary’s little boy from her arms, out of the hospital and to a waiting van. She heads off for New York.

Laura is distraught to the point of hysteria. She is able to pick out Mary Terror from an FBI file and the FBI starts looking for her. Unable to stand still with lose ends, Laura launches her own investigation.

A couple months prior, she had been given a book to review by a guy who spent a great deal of time with various 60s radical groups including the Storm Front. After a great deal of arm twisting, Laura gets the man to take her to Ann Arbor to meet a retired member of the organization who might know something about the whereabouts of the old gang.

When they arrive there, the woman isn’t home, having gone to a cabin in the woods for a few days to paint. That night, Laura does a little recognizance on the woman’s cabin and encounters a man also looking around. They fight and the man escapes. The next day, when the woman returns, Laura meets Bedelia, Bedelia is adamant she is not going to get involved. As they start talking, shots ring out and kills the guy riding with Mary. Mary fires on Laura and Bedelia and miss him. They manage to escape, chasing Mary and Laura’s baby down an interstate while an unknown party continues to track them.

Mary is headed from Michigan to San Francisco where they Storm Front Brigade owned a home. Mary is confident that it is there Lord jack will meet her and accept his new, beautiful son he has for her. Laura and Bedelia are determined to see that she doesn’t make it there.

The three chase each other down the highway for hours, exchanging occasional gunfire. Finally, the third car, that contains an old, retired FBI agent with a grudge to score with Mary, wrecks and kills himself. It’s now just Laura and Bedelia versus Mary Terror. From time to time, Mary pulls off and ransacks the home to kill the people, take their food, vehicles, and guns. Mary and Bedelia rob a pawnshop for money. When Laura and Bedelia meet at a lumberyard, their car gets shot up in the firefight and all parties get their bodies chewed up by guard dogs.

Mary tears away in her van and Bedelia and Laura steal the yard master’s car and follow in pursuit. Mary has a several hour head start on them and, as they enter the mountains, the weather starts to turn treacherous.

Both Mary and Bedelia have an old newspaper photo and some names of men living in a town near San Francisco where the Stormfront was founded many years before. Mary plans to get there, find Lord Jack, and take up life as a family woman. Laura plans to kill her if she has to to stop her.

Mary is wounded from a major dog bite on her thigh she received at the lumber yard. She is hurting and has lost some blood. The roads are becoming impassible, so she pulls off into a lodge where stranded travelers are being put up. A few hours later, Laura and Bedelia arrive and confront her.

A shootout ensues and Bedelia is killed. Mary takes off into the diminishing storm. Laura follows, but falls far behind when her car’s radiator gives up the ghost.

As Laura is getting her radiator fixed, Mary arrives in town and begins the search. The first guy she finds is not Lord Jack and she kills him. She moves on. Laura arrives in town and begins her search using the same set of clues. They arrive at Lord Jack’s house to find he’s settled into a life of quiet domesticity. A shootout ensues. Mary is killed and Laura gets her baby back.

This was McCammon’s first novel outside the realm of horror or the supernatural and he proves he has the chops for it. Mine is a taught chase thriller with believable characters, superb and plausible plot, and a narrative that seldom pauses to let the reader get his breath.

The novel fuses two very different decades. It brings the “burn, baby, burn!” decade of the late 1960s into the self-focused, self possessed decade of the 1990s. Two value systems and two different generations collide to create friction and conflict.

It also introduces another element of conflict within culture. There were the radicals hell-bent on destroying capitalism in America versus the “silent majority” as Richard Nixon called them who were average Americans who worked and paid bills.

There is a minor subtext within Mine that was brought much more to the fore in the famous baseball movie Field of Dreams. It is how the peace and love generation who devolved into the Yippies and the Weather Underground atone for or live down their previous lives. Mary hurt her wealthy parents who wanted so much for her. Bedelia did the same to hers. Bedelia went underground, but strived to live a life that was free of violence and harm. She tried to do right in helping Laura and found redemption in her actions. Mary, like a few of those radicals from decades ago, remained true to her cause. McCammon could have strengthened this subtext just a bit more by assigning a few more bad deeds to Bedelia in her past. Still, it worked.

Laura was the protagonist in Mine, but Mary Terror was the star. McCammon wove a true to life character. So many radicals of that time and of our time subscribe to causes and ideologies not to advance any core beliefs, but to provide a context for their lust for blood. Mary is no true believer in the cause of world socialism. She is nothing more than a sadistic killer needing ideological fuel to stoke her furnace. She’s as terrifying as any supernatural monster.

As a chase novel, Mine worked exceptionally well. McCammon’s interludes were all plausible. The finding and escaping rarely relied on ex deus machina. That was tough to pull off, but never does the reader groan when one of these meetings takes place. It all works. The pacing and the tension in the pursuits is also nicely done. Both parties are injured and hurting. Both are driving junker vehicles. Neither knows if they will make it. The tension was palpable throughout Mine.

McCammon really stretched himself when he wrote this book and it was a breakthrough for him. He would become enamored with writing more mainstream material – much to the chagrin of his publisher. McCammon’s difficulties with his publisher are well documented and after another mainstream effort, Gone South, it would be a long time before McCammon would write again. When he did return to writing, he was writing historical fiction – good historical fiction that maintained his already dedicated fan base.