The Alienist By Caleb Carr

The Alienist
By Caleb Carr
Copyright 1994

Caleb Carr, an historian of some renown, takes his ability to research and explain cultures of earlier times, the science of an earlier time, and a well plotted murder mystery and fold them into a riveting horror/mystery novel. 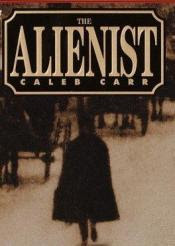 It’s 1896 and a serial killer is stalking the gay brothels of New York City. He’s abducting, mutilating, and murdering young boy prostitutes. Desperate for results and not trusting his corrupt detectives bureau, police commissioner Teddy Roosevelt assembles an unusual team to investigate the crime and identify the killer.

John Moore is a crime reporter for the New York Times and he tells the story. He is teamed with Dr. Laszlo Kreitzler, a psychologist which in the vernacular of the time were known as alienists. Kreitzler believes he can develop a psychological profile of the killer to help find him. Also joining the team are Marcus and Lucius Isaacson, a pair of brothers recently hired by Roosevelt as detectives. They utilize the new and unrecognized by courts technique of identifying suspects by fingerprints. The final member to join the team is Sara Howard, a secretary within the police department.

The team decides, with its expertise, it is going to utilize all the new police techniques to bring the killer to justice.

They don’t have to wait long to see their first victim. In lower Manhattan, a 13 year old boy, dressed as a girl while working as a prostitute, is founded murdered and mutilated. His eyes are missing. He is found in a kneeling position with his right hand chopped off and his genitals removed and placed in his mouth.

The team then learns of an earlier crime performed on another immigrant kid in lower Manhattan. They learn that this particular victim’s family learned what their son was doing on the streets and the father tried to beat him out of it. The boy ran away and took to life on the streets.

Along the way, Moore and Kreitzler and their team come up against a number of opposition groups – the groups who want to maintain the status quo in society. The gangsters who will use rabble rousing about the murders to put the establishment on their heels. Traditional cops who do not want their corruption exposed or their lack of ability. The churches of the area do not want their parishoners exposed. The monied interests – including J.P. Morgan – have an interest in assuring the investigation does not intrude upon their interests.

A little hard detective work in examining similar offenses many years before put them onto a suspect. This suspect was exposed to gore and violence by his ultra-religious father who showed him picture after picture of massacred Indians. Later, that child and his brother’s parents are found murdered. Local law enforcement assumed that the Indians had retaliated against the family. Kreitzler and Moore have their doubts.

They locate the brother of the young boy, living as a farmer in rural Massachusetts. Kreitzler and Moore talk to him and learn that the brother had been molested by a trusted friend of the family while on a hunting trip. His brother, he tells them, enjoyed torturing small animals.

With a suspect’s name in hand, the mission becomes one of finding the man they know has committed these atrocities. The forces opposed to them bring all that they have against him. Kreitzler’s maid and love of his life is murdered, driving him out of the organization. His house boy is beaten badly by those who do not want the killer exposed.

After a day working in the underworld of tenements in Lower Manhattan, they are on the trail of the man. The final confrontation happens on the man made water reservoir in Lower Manhattan where they confront the killer who has a victim in hand. The killer overpowers Kreitzler and Moore and ties them up. As he’s getting ready to kill his victim, Machine Gun Kelly’s men arrive on the scene and kill him, preventing Kreitzler from conducting the forensic psychological examination he so badly wants to conduct.

In the end, Commissioner Roosevelt is grateful for what they have done. A strong bond has formed between Kreitzler, Moore, and Sarah that promises to place them together in more similar adventures.

In The Alienist, Caleb Carr brings so many plot elements into play that the story does not fit into any particular police subgenre. It is not a procedural, although there is a lot of procedural in the story. Most of it is new and cutting edge for the time. The central, traditional element was the simple whodunit facet of the story. All of the other subplots and character developments sprung directly from the plot.

The real-life characters, embellished just a little for the purposes of the story, added a taste of historical fiction. With the time and place being Manhattan at the turn of the century, the historical elements are quite in play. Many authors will use one of these devices to tell an exciting, yet single faceted story.

Carr goes one better. He takes all of the elements of developing science, the real life players of turn of the century New York, the criminal and the nature of his crime, the nature of this victims, and created a story to be enjoyed by anyone who enjoys any of the police/mystery subgenres.

The story's climax had a bit of ex deus machinas that was a bit of a head slapper toward the end when all of the characters and their agendas arrived at the same place at the same time. But Carr sorts it out al to make it not quite as painful to read and a little easier to swallow.

The character development is good, but not great. Most of the book dealt with the plots and subplots. But we end up with a Kreitzler who has deep feelings for another woman. We have a Moore questioning his own profession as a reporter, and Sarah, questioning her role in crime detection as a woman and her relationship with Moore. All this lends itself easily to a sequel that came just a few years later.

This was a sold book from beginning to end. Well worth the time and effort invested in reading. A first rate story will keep the reader rivited while learning new and interesting facts in the history of detective work and science.

Posted by Brian Schwartz at 9:12 PM