A Good Knight's Tale by Harold K. Bakst
A Knight of Solomnia tells a scribe a tale about how two intertwined trees came to grow together. A protective father tried to shield his daughter from prospective beaus by moving her deep into the forest. Instead, she found something new and different to love. 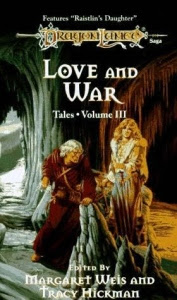 This read very much like a child’s fairy tale – and a good one. Many of the better Dragonlance short stories read that way.

A Painter's Vision by Barbara Siegel and Scott Siegel
A beautiful bar maid marries a talented – but poor painter. The couple comes across a bronze dragon and befriends it when the painter paints its portrait. Years later, the painter dies in a house fire. The widow is grief stricken and takes up painting portrait after portrait of her late husband. The bronze dragon checks in on her from time to time over the years and finally, beholds her last and greatest work.

This was one of the finest Dragonlance short stories written by the authors who are the best at it outside of Weiss and Hickman themselves. Poignant while not being sappy, this story hits all the right notes.

Hunting Destiny by Nick O’Donohoe
This is the backstory for the White Stag. We find out that he is a jilted lover doomed to a fate of living over and over again to be hunted. He, along with the hunters who are also doomed for abandoning their posts generations ago, find a way to redemption.

This story was all over the place and was hard to follow. The Stag itself was quite confusing. Was a hero? An anti-hero? A villain? A really weak effort.

Hide and Go Seek by Nancy Varian Berberick
Tas is taken prisoner by a band of hobgoblins. His fellow prisoner notes the confidence with which Tas carries himself as he taunts their captors, even in the face of certain death. Tas is confident that his friends will come to their rescue. Eventually, Tanis and the others pull off a daring rescue.

Good action story with no subtext or distractions. This is the kind of bubblegum fantasy I enjoy most when I read Dragonlance.

By The Measure by Richard A. Knaack
The Solamnic Knight, Garrick, is trapped behind enemy lines during the war of the lance. As the Knights organization becomes increasingly political, he fights by the old standard of the code and the measure.

The Exiles by Paul B. Thompson and Tonya Cook
A young Sturm Brightblade, his mother, and their maid are forced to flee Solomnia after a peasant uprising. They take to the sea to sail for a new home. They are taken prisoner by a vampire creature and must fight for their lives.

A great backstory for Sturm Brightblade. It gives his character new depth as a melancholy warrior.

Heart Of Goldmoon by Laura Hickman and Kate Novak
Riverwind, a pauper-son of a pauper of the Que-Shu tribe is one of many men competing to escort Goldmoon, the princess of the Que-Shu, to the temple of the new gods to visit her ancestors and learn from them. But Riverwind and his father worship the old gods, making him a heretic. He bests the competition and is one of two men to accompany Goldmoon. There, he and she both learn the nature of treachery and the nature of the new gods as well as the old ones.

This was a fantastic story! These authors capture these two already established characters wonderfully and provide a tremendous backstory hinted at in the original trilogy.

Raistlin's Daughter by Margaret Weiss and Dezra Despain
The legend of Raistlin’s daughter. A strange woman enters an inn where Caramon and Raistlin are having supper. She is molested by some of the locals and the twins come to her defense. She casts a strange spell over Raistlin and there is only one way he can save himself and her.

This story received top billing on the cover of the book. But it is not nearly as good as some of the others.

Silver and Steel by Kevin Randle
This is the tale of Huma’s final battle with the forces of the Dark Queen.

The author really overdid it with the blood and gore. Not that the story is particularly graphic. It’s just that he says over and over again in various ways, there was lots of blood and gore.

From the Yearning for War and War's End by Michael Williams
An account of the siege of Palanthas from a young knight of Solamnia as he writes his brother from the infirmary. He compares the attitudes toward battle and war between the foot soldiers who do the grunt work and the knights who lead.

The prose of this story was certainly different from the other Dragonlance stories I’ve read. It was much more literary and highbrow. A thoroughly enjoyable story.

Posted by Brian Schwartz at 3:13 PM