Judas Coyne is an aging, washed up rock star living in relative comfort on a New York farm with his goth girlfriend, MaryBeth. Judas has a passion for the macabre and morbid. One day, his assistant points out an auction site where a dead man’s suit is being auctioned off. The suit comes with its very own ghost. 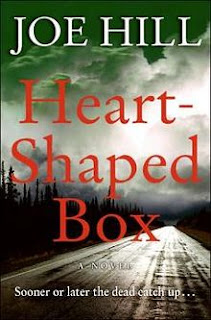 Judas purchases the suit and it arrives in a heart-shaped box. After its arrival, bad things start happening around Jude. One evening, he sees an old man wearing the suit sitting in his hallway, watching him. A few days later, his assistant flees the home, vowing never to return. He has contacted the seller to get information about the suit and did not like the answer.

Jude learns that the suit belongs to the step-father of a former girlfriend of Jude’s who killed herself shortly after Jude ditched her. Anna’s half sister set Jude up to buy the suit so the ghost could avenge his step-daughter’s death.

When the ghost nearly makes Jude kill MaryBeth, they flee their New York farm and head to Florida to see Anna’s half-sister and make her take back her ghost. They take with them their two dogs who are able to keep the ghost at bay. When they arrive, They learn the family’s sinister secret and the real nature of Anna’s death. They are forced to flee after the half-sister’s daughter shoots Jude. They head for Jude’s father’s home in Louisiana where he lays dying of cancer.

Once there, the ghost catches up with them. With the dogs now dead, Jude and Anna are at the mercy of the ghost. However, Anna’s spirit returns through MaryBeth and she is able to vanquish her evil step-father. Jude and MaryBeth marry and have Anna’s step-sister arrested for crimes related to her sister’s death. A few years later, Anna’s niece comes to visit Jude and Anna and they assist her in moving on with her life.

For a first novel, Heart-Shaped Box is outstanding. Well plotted, well paced, and well developed characters are all there. Joe Hill is his father’s child.

Anti-heroes are hard to write well. Judas Coyne is certainly an anti-hero. He’s cold, uncaring, and dismissive of others. While not entirely self-centered, he will usually indulge his own desires before the feelings of others. Hill takes him through the entire character arc. As those around him become threatened because of his indulgence in his macabre hobby, he comes to care for them more. Hill makes him more sympathetic with the abusive father. In the end, Coyne is the consummate husband who cares about his ex-girlfriend’s niece.

The novel moves along quite nicely. The geography is fairly expansive. Hill balances the movement nicely. He does not bog us down in the minutia of the trip, yet he doesn’t cheat by beaming his characters from location to location.

The ghost is scary enough. I did not like the military angle. It humanized him just a little more than I liked. A more ominous or spiritual tie to mesmerism would have served to make the character more sinister.

My chief complaint about Heart-Shaped Box is the denouement. It is entirely too long and mostly unnecessary. I suppose it was to serve to bring Judas’ character arc to where Hill wanted it. It mostly failed. There was no connection to the little girl that shot him several years before. She just shows up without any real reason or attachment to Jude.

It could have ended with Judas and MaryBeth returning to their farm to live in domestic harmony and simplicity. That would have just as well served to let the reader know that Jude was a changed man.

Heart-Shaped Box is a solid horror novel and an outstanding kickoff for the career of Joe Hill. While it is simpler than his later works such as The Fireman and Horns, it is better. The plot is better. The characters are better. And the story is more interesting.