The Legend of Huma: Dragonlance Heroes, Vol. 1 By Richard Knaak

The book narrates the adventures of Huma Dragonbane, a Knight of the Crown, his meeting with Kaz the Minotaur, the discovering of the dragonlances, and the defeat of Takhisis during the Third Dragon Wars. 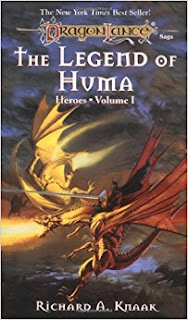 Huma and the rest of his unit patrol through a desolate village. Huma's commander, Rennard, orders the investigation of the nearby woods due to a rumor of goblin activity. During the ensuing confrontation Huma is separated from his unit. While searching for his comrades he comes across goblins tormenting a captive, the minotaur Kaz. After saving Kaz, Huma strikes up an unlikely friendship with the minotaur and later with a silver dragon before being reunited with the Knights.

Once back at headquarters, they encounter a battle between the forces of Paladine and the forces of Takhisis. Huma is struck in the battle and loses consciousness. He awakens in an infirmary being tended by a woman who introduces herself as Gwyneth. Huma is appointed captain of the watch, and encounters his old friend, Magius, a powerful magic user.

Magius tells Huma to trust him, but has to leave while Huma returns to the knights' encampment. The knights are engulfed in a battle with the forces of Takhisis and Huma and Kaz are thrown into a magical darkness. Magius leads Huma and Kaz through the battle to his Citadel, but later prevents them from leaving. Magius tells Huma that he is a renegade mage that took the test in the Tower of High Sorcery.

The Citadel is discovered by Galan Dracos and comes under attack by the forces of Takhisis. Magius tells Huma that a mountain represented by a tapestry in the Citadel is important and that Huma should journey into Ergoth toward this mountain. Huma and Kaz flee the Citadel.

Huma and Kaz are separated. Huma fights off dreadwolves and warriors and becomes lost in the forests of Ergoth. He is helped by an Ergothian commander who brings him to the Ergothian camp. The Ergothians tell Huma that the lands around Ergoth have been ravaged by the plague. While the camp is traveling Huma comes upon a ruins of a town and is captured by servants of Morgion. The Ergothians rescue Huma who then encounters Magius, and the two escape into the night.

Magius and Huma come across the knight Bouron who is attached to an outpost of the Knights of Solamnia. Bouron and his commander Taggin welcome Huma. Taggin captures Kaz and puts him on trial. Taggin releases Kaz to Huma and allows Huma to continue on his journey to the mountains accompanied by a retinue of knights.

Magius, Kaz and Huma traverse the paths in the mountains and Huma is separated from the others. Huma is led to a temple built into the side of the mountain and encounters Gwyeneth. Gwyeneth tells Huma that he will face challenges before he can claim the prize that he has come for. Huma enters the mountain and faces Wyrmfather, an ancient, serpentine dragon. Huma hides in Wyrmfather's treasure room, discovering an evil magical sword called the Sword of Tears. Huma kills Wyrmfather with the Sword of Tears and is teleported through a magical mirror in the treasure room to Solomnia.

Huma returns to Vingaard Keep to find that the head of the knights, Grand Master Trake, has died. Huma is to attend a meeting that will determine whether Bennett, Trake's nephew or Lord Oswald, the High Warrior and Huma's mentor, will become the next Grand Master. During the meeting Rennard tells everyone that Oswald has become mysteriously ill. At night Huma discovers the guards near Lord Oswald have been put into a magical sleep, then encounters Rennard dressed as a servant of Morgion, trying to poison Lord Oswald. Huma and Rennard fight, but Rennard escapes. Lord Oswald thanks Huma for his help and sends him back to the mountains of Ergoth. Huma encounters Rennard inciting villagers to violence. The two fight until Rennard is mortally wounded. Huma is then teleported back to Wyrmfather's treasure room.

Huma finds the Sword of Tears, lying among the treasure. He takes it with him and looks for an exit from the mountain. Huma encounters Gilean, a grey clad mystic, who tells him to leave the sword behind. Huma struggles for control as the sword tries to control his mind, eventually prevailing, discarding the sword. Huma is granted access to the workshop of Duncan Ironweaver.

Duncan tells Huma that he is the creator of the Dragonlance and allows him to pass into a room where Huma has a vision of the knightly, benevolent god Paladine, on a platinum dragon. Paladine hands Huma the Dragonlance.

Huma exits the chamber and finds Gwyeneth, who tells him that Kaz and Magius are nearby. Huma finds Kaz and Magius and with the help of a silver dragon that Gwyeneth sent for, they are able to prepare the lances for transport to Vingaard Keep.

En route to Vingaard the group is attacked by Crynus and Char. Huma and the silver dragon kill Char and Crynus is defeated with the help of Kaz and the silver dragon. Warriors of Takhisis attempt to steal the lances, but are prevented from doing so by Kaz. Magius is captured and taken back to Galan Dracos.

Huma rejoins the knights to find that there are many Dragonlances already there. He finds Duncan Ironweaver, who tells him he had many. Many good dragons show up and are fitted with the new lances, and go into battle against the evil dragons of Takhisis.

This entry in the Dragonlance canon is held in high regard by fans of the series. I enjoyed reading it. But I thought the characters were flat and the plot somewhat episodic.

There were many exciting scenes and the battle scenes were well written and fun to read. But between the battles, there were few revelations, few insights, and little introspection on the part of Huma. This is when character development happens. This is where you make the character interesting, sympathetic, and compelling. Knaak fell a little short of that. Huma was thin.

He had honor. He was all about the honor. Why? Just because he was a Knight of Solomnia? As Knaak reveals, knights are capable of scheming and duplicity. What set Huma apart? What made his honor flawless? We never learn.

Huma’s friendship with Magius is another undeveloped aspect of the character development. Were they just kids who were close friends? Did they face adversity together as children? Did one help the other as children? What forged this bond that led to Huma’s trust in Magius who seemingly had gray morals? Again, that was left on the table.

I loved Kaz the Minotaur. This character will appear again in the Dragonlance saga and have his own novel. Kaz defines what it is to be a minotaur. He’s warlike, aggressive, and hot tempered. But minotaurs are also about honor, like the Knights. Knaak’s treatment of Kaz and the minotaur race was fantastic.

Overall, Knaak’s development of the Knights of Solomnia of old – those knights so revered by Sturm in the Chronicles – was also masterful. This is their first appearance in novelization and given Weis and Hickman’s background on them, had to be handled carefully, lest they become a caricature of moral perfection, or worse, a politically scheming group of soldiers that was less than the honorable warriors of legend.

The dragons in The Legend of Huma were charming and again, handled well by Knaak based on the legend developed by Weis and Hickman. Gwyneth is a charming, but tragic creature. She is a true dragon in her fierceness in battle. She is a kind, loving woman in human form and Huma’s legend is defined by her.

Finally, I give credit to Knaak for an ending fitting for a legend. Huma’s death was masterfully crafted. Not lugubrious, not melodramatic, but heroic and sad. This is the easiest point for an author to trip up, getting caught up in his need to flex his writing chops. It’s also the easiest way to ruin a good story, making the reader gag on drama. Huma’s end was a fitting end to a knight whose legend would survive the cataclysm.

My evaluation is based on a comparison to the Chronicles and Legends written by Weis and Hickman. Perhaps that is an unfair standard, given that Weis and Hickman were the creators of the Dragonlance world and were allowed to make their own rules, set their own parameters, and define the world. Knaak works within those definitions. But with the thin characters, it falls short of the tales of the earlier novels who had fantastic, well developed characters who made the stories work.

Posted by Brian Schwartz at 8:32 PM