This Perfect Day By Ira Levin

Christ, Marx, Wood and Wei
Led us to this perfect day

Marx, Wood, Wei and Christ
All but Marx were sacrificed

Wei, Christ, Marx and Wood
Made us humble, made us good

Hundreds of years in the future, mankind is guided, assisted, and controlled by a computer known as Uni. Uni assigns treatments of various drugs and vitamins to keep humans pliable and happy. Jobs are assigned. Sex is permitted on Saturday nights. People are moved from continent to continent based on Uni’s perceived needs. Society is docile, happy, and controlled. 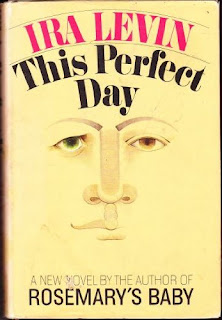 From Wikipedia:
Li RM35M4419, nicknamed "Chip" (as in "chip off the old block") by his nonconformist grandfather Jan, is a typical child Member who, through a mistake in genetic programming, has one green eye. Through his grandfather's encouragement, he learns how to play a game of "wanting things", including imagining what career he might pick if he had the choice. Chip is told by his adviser that "picking" and "choice" are manifestations of selfishness, and he tries to forget his dreams.

As Chip grows up and begins his career, he is mostly a good citizen, but commits minor subversive acts, such as procuring art materials for another "nonconformist" member who was denied them. His occasional oddities attract the attention of a secret group of Members who, like Chip, are also nonconformists. There he meets King, a Medicenter chief who obtains members records for potential future recruitment to the group, King's beautiful girlfriend Lilac, a strong-willed and inquisitive woman with unusually dark skin, and Snowflake, a rare albino member. These members teach Chip how to get his treatments reduced so that he can feel more and stronger emotions. Chip begins an affair with Snowflake, but is really attracted to Lilac.

Chip and Lilac begin to search through old museum maps and soon discover islands around the world that have disappeared from their modern map. They begin to wonder if perhaps other "incurable" members like themselves have escaped to these islands. King tells them that the idea is nonsense, but Chip soon learns that King has already interacted with some "incurables" and that they are indeed real. Before he can tell Lilac, Chip's ruse is discovered by his adviser. He and all the other members of the group are captured and treated back into docility (except King, who takes his own life before he can be captured).

Some years later, Chip's regular treatment is delayed by an earthquake. In the meanwhile, he begins to "wake up" again and remembers Lilac and the islands. He is able to shield his arm from the treatment nozzle and becomes fully awake for the first time. He locates Lilac again and kidnaps her. At first she fights him, but as she too becomes more "awake," she remembers the islands and comes willingly. In process she was raped by Chip. Finding a convenient abandoned boat on the beach, they head for the nearest island of incurables, Majorca. There they learn that UniComp, as a last resort, has planted failsafes that eventually lead all incurables to these islands, where they will be trapped forever away from the treated population, and eventually marry and have a child together.

Chip conceives of a plan—destroy the computer, UniComp, by blowing up its refrigeration system. He recruits other incurables to join him, and they make their way to the mainland. Just as they reach UniComp, one of the incurables—an agent of the programmers—betrays his partners and leads the rest of group at gunpoint to a secret luxurious underground city beneath UniComp, where they are met by Wei, one of the original planners of the Unification. Wei and the other "programmers" who live in UniComp have arranged this test so that the most daring and resourceful incurables will make their way to UniComp, where they, too, will live in luxury as programmers.

After joining the programmers, and after a few tentative attempts to confide in someone, Chip shares his misgivings with no one, lies low, and dedicates himself to the task of gaining Wei’s confidence. For example, to deceive Wei, Chip consents to the replacement of his green eye with a brown one—even though this involves giving up a cherished part of his identity.

But when, nine months later, a new group of incurables arrives, Chip leaves the welcome party with the intention of using the newcomers' explosives to blow up the master computer. There follows a harrowing physical struggle with Wei (who has the body of a young athlete), and the shooting of Wei. Just before he gets killed, Wei betrays his real motive in creating this dystopia:

“Chip, listen to me,” he said, leaning forward, “there’s joy in having it, in controlling, in being the only one.”

Chip knew all along that it was power hunger—not altruism—that drove Wei to chicanery and murders. On his way up from the underground city towards sunlight, Chip tells an angry programmer: “’There’s joy in having it’: those were [Wei’s] last words. Everything else was rationalization. And self-deception.”

The book ends with Chip riding a helicopter toward Majorca where his wife, son, financial sponsors, and friends are hopefully waiting for him. For the first time in his life, he sees raindrops in daytime—nature’s affirmation that the era of slavery and total control is finally over.

I have been an Ira Levin fan since I first discovered The Stepford Wives in the late 1970s. Yet this book never crossed my path. How can that be? I am glad to have discovered it.

Levin never veils his metaphor too heavily and here, he is obviously panning the communist state. He decries the central planners who decide every facet of the lives of the people in a communist society. However, he puts a different spin on it than Orwell or Huxley. His totalitarianism is passive from beginning to end. It never harms or hurts dissenters. It exploits them. Perhaps that is scarier.

For approximately 7/8s of this book, I was confident where the story was headed. I enjoyed reading it, but felt that Levin had broken no new ground in the field of dystopian totalitarianism. Man, was I wrong. That linear path that Levin was following took an abrupt turn. Adjusting to that, the reader thinks he’s got it figured and it twists again. I love a writer not afraid to punch his readers in the face with a great twist. Levin is great with the ending of his book.

I’ve not read all of Levin’s works, but I’ve read most of them and this one was the only one with anything resembling a happy ending. No happy ending (if you’re a Christian) for Rosemary or her baby. No happy ending for the feminists in The Stepford Wives. No happy ending from those exploited Boys from Brazil. Yet the hero in his one stab at dystopia gets his happy day. For fans of Levin, that in itself was a twist they probably didn’t see coming.

Like Levin’s other work, This Perfect Day was devoid of humor. No laugh lines. No humorous situations. It’s all dark and disconcerting. For me, this is what good horror and good dystopia is made of. Dean Koontz is one to get too cutesy with his horror and just ruins it. Stephen King does this occasionally as well. Give me the nasty writers like Levin or Bentley Little.

I wonder why This Perfect Day is not better known or more highly regarded. I believe this was the only Levin novel not made into a film and that’s a damn shame. As much as I appreciate the b-movie campiness and unveiled social commentary of the movie version of Logan’s Run, I know that This Perfect Day is a better story. Farrah Fawcett and all the other beautiful women would have fit into the script quite nicely. Alas, without a screen treatment, This Perfect Day is doomed to obscurity with so many other great dystopian novels of the 1960s and 1970s unrecognized by the Hollywood intelligentsia.