The Exorcist By William Peter Blatty

The book. The movie. Both acclaimed in their respective media. Both are chilling. Both are fantastic.

From Wikipedia:
An elderly Jesuit priest named Father Lankester Merrin is leading an archaeological dig in northern Iraq and is studying ancient relics. After discovering a small statue of the demon Pazuzu (an actual ancient Assyrian demigod), a series of omens alerts him to a pending confrontation with a powerful evil, which, unknown to the reader at this point, he has battled before in an exorcism in Africa. 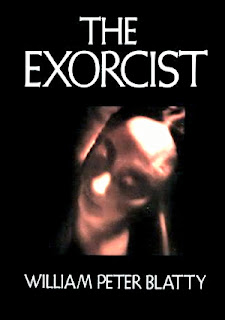 Meanwhile, in Georgetown, a young girl named Regan MacNeil is living with her famous mother, actress Chris MacNeil, who is in Georgetown filming a movie. As Chris finishes her work on the film, Regan begins to become inexplicably ill. After a gradual series of poltergeist-like disturbances in their rented house, for which Chris attempts to find rational explanations, Regan begins to rapidly undergo disturbing psychological and physical changes: she refuses to eat or sleep, becomes withdrawn and frenetic, and increasingly aggressive and violent. Chris initially mistakes Regan's behavior as a result of repressed anger over her parents' divorce and absent father.

After several unsuccessful psychiatric and medical treatments, Regan's mother, an atheist, turns to a local Jesuit priest for help as Regan's personality becomes increasingly disturbed. Father Damien Karras, who is currently going through a crisis of faith coupled with the loss of his mother, agrees to see Regan as a psychiatrist, but initially resists the notion that it is an actual demonic possession. After a few meetings with the child, now completely inhabited by a diabolical personality, he turns to the local bishop for permission to perform an exorcism on the child.

The bishop with whom he consults does not believe Karras is qualified to perform the rites, and appoints the experienced Merrin—who has recently returned to the United States—to perform the exorcism, although he does allow the doubt-ridden Karras to assist him. The lengthy exorcism tests the priests both physically and spiritually. When Merrin, who had previously suffered cardiac arrhythmia, dies during the process, completion of the exorcism ultimately falls upon Father Karras. When he demands that the demonic spirit inhabit him instead of the innocent Regan, the demon seizes the opportunity to possess the priest. Karras heroically surrenders his own life in exchange for Regan's by jumping out of her bedroom window and falling to his death, regaining his faith in God as his last rites are read.

The name William Peter Blatty is not a household name like Stephen King. He did not produce a prolific amount of horror fiction or much fiction for that matter. But in delivering The Exorcist, Blatty wrote one of the absolute cornerstones of the horror genre and built upon the ground laid by writers like Ira Levin to put horror novels back on the shelves and inspire novelists to write horror after the genre was nearly dormant for more than a decade.

It’s hard to put a finger on just what makes The Exorcist so good because it does have a few problems. The dialogue is atrocious. Blatty has a tin ear for the spoken word. It was stilted, choppy, and sometimes painful to read. I know he was trying hard to develop the detective as a deliberate bumbler – Columbo before Columbo. But he tried too hard. It was difficult to read when he talked.

One of the plot devices Blatty employs – the desecration of the churches – is never fully utilized or developed. We are supposed to understand that Regan did this or that Pazuzu did it. But the link is never established. This could have taken the novel to whole new levels of terror. I wanted to see so much more done with this.


What is good is the development of Chris MacNeil as a mother. She is a famous actress and Blatty gives us just enough of this to make her interesting. What he does so much more thoroughly for the benefit of the reader is develop her as a mother with a seemingly unsolvable problem with her daughter. She is desperate. She is frightened. In an age when eschewing faith was trendy with the nation’s elite, she was forced to return to it. It all was developed wonderfully.

The setting added a lot to the plot. This was not a medieval village or a remote part of Europe or the Middle East. Pazuzu took his act right to the nation’s capital, just off the Georgetown campus. It was urban America. It was a wealthy family with a wealthy child. American readers could relate. The landmarks were real to them. The people were real. That went a long way to making The Exorcist an excellent horror novel.

The strongest element was the blending of science and religion. Father Karras is not only a priest, but a psychiatrist. He tries science, grasping at the rational before employing his wavering faith. He exhausts the solutions science has to offer before seeking a religious solution. This blending lent a great deal of rationality to the novel in an era when society sought rational answers for all dysfunction.

I’ve heard the movie called the scariest film of all time. I disagree. It is a good film bordering on great. But scary? No. The book ranks very highly on the various rankings of horror novels. Is it that terrifying? I didn’t think so. It is interesting. It is compelling reading. It is a good story, well paced and tightly told. But it didn’t have me transfixed the way The Shining or the Haunting of Hill House did. Those are superior scary stories.

Blatty’s novel was timely inasmuch as Ira Levin’s Rosemary’s Baby was. Faith in the church in America was ebbing in 1971. The social revolution of the 1960s had ended, but its aftermath was still much a part of the American fabric. Blatty’s novel served to remind America of the power of faith. I don’t mean to preach the gospel. It’s just an observation that faith and religion are powerful. At a time when its importance was diminishing, Blatty’s novel and movie was as subtle as a brick to the forehead.

If you are a fan of horror, The Exorcist is an absolute must-read. The tropes Blatty establishes would be used by many other authors for stories of possession. Blatty drew from fact and solid research and introduced it to the horror community. It became a wellspring of modern possession tales and should be valued for that if nothing else.

Posted by Brian Schwartz at 5:24 PM