The Revelation By Bentley Little

The Revelation
By Bentley Little
Copyright 1990

The Revelation was Bentley Little’s first published novel and won the Bram Stoker Award for first novel in 1990. 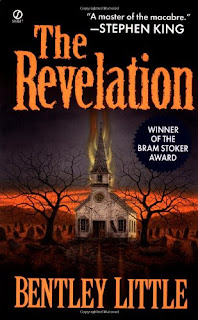 The novel (as many of Little's works do) deals with a series of unexplained events in a small town in Arizona. A church is defaced with goat's blood, the pastor and his family disappear, and several townspeople begin having terrifying visions of deformed infants. Eventually, an unknown force begins to attack and murder several of the townspeople.

Gordon, the main protagonist, discovers that his wife is pregnant and begins to fear for her safety and that of the unborn child. Soon, a seemingly unbalanced evangelical preacher named Brother Elias comes to the town to preach about the end times. Widely ignored at first, he gradually gains a following of people as more and more bizarre events unfold in the town.

As the terror mounts, Elias convinces Gordon, the sheriff, and the new pastor to join him in his quest to stop Satan from raising an army of deformed infants. It seems that the devil has the power to corrupt the unborn into horrible servants of darkness, and over the centuries hundreds of these stillborn children have been buried in the hills surrounding the town.

Elias reveals he is not human, but an earthly servant of God whose role it is to stop Satan from assembling his army. He further explains that he has done this several times over the millennia. The four men face off against the incarnation of the devil, who has taken the form of the missing pastor. They succeed in stopping him, though Elias knows that the battle is never truly over and begins wandering away to make preparations for the next battle.

The Revelation is an outstanding first effort for a writer and compares favorably to Robert McCammon’s Baal as a good first effort.

The book closely resembled plots of many early 1970s slasher films. This book could have easily served as source material for Mario Bava or Dario Argento. Much of it is crudely violent. The descriptions of the killer babies are crude. But it’s a crude that works for Little. It has served him well over the years in later work.

It does have a few weaknesses in the characters which is to be expected from a first novel. The sheriff is quick to embrace the supernatural explanation of what is happening to his town. Little’s sheriff is not all that different than the stereotypical small town sheriff. He is level-headed. He takes things as he sees them. Yet his arrival at his conclusion required no hard convincing. It required no dramatic epiphany. His conclusion was necessary to advance the plot and Little took the easy way out.

I liked the ambiguity of Brother Elias. Was he good? Was he evil? Was he a nut? We really don’t get a read on him until the climax when the group must go out and make their stand against evil. But through the book, he acts very much as an antagonist. His preaching causes civil unrest. He shows up at the most inopportune times to disrupt. Little was magnificent in his development of this character.

Little consistently writes well-paced fiction and The Revelation is no exception. Little gets down to the business of establishing his main characters early. The trigger for the action arrives within the first few pages as well when the church is desecrated and the minister and his family disappear. This is how young novelists usually go about their business and Little is no different. From there, Little keeps the action moving nicely and provides a climax that is just the right length for a novel like this. Little is definitely plot driven.

The Revelation was a good way to pass the time with some raw, basic horror. There’s nothing new here. No twist on established tropes. No outstanding characters. Just plot driven horror. It’s not bad and it’s a great outstanding first effort.

Posted by Brian Schwartz at 2:29 PM