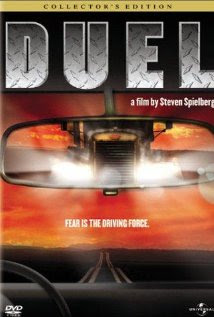 In 1971, Richard Matheson took his 30 page short story which appeared in Playboy Magazine earlier that year and retooled it into a full length feature screenplay. Dennis Weaver plays David Mann, the innocent salesman driving a 1970 Plymouth Valiant, pursued by a mechanized horror embodied in a tractor tanker rig driven by a nameless, faceless demon who has no other goal than killing him.

The movie moves forward just as the story. Mann innocently passes the slow moving tanker This starts a game of cat and mouse that starts as passing and cutting off each other and escalates to battle of man and machine (or Mann and machine) in a fight to the death.

Matheson pads his story some and gives us a few interludes that aren’t in the story. There’s a great scene when Mann stops at a roadside gas station that also serves as a snake ranch. Mann weaves and dodges on foot as the semi, which seems to be imbued with supernatural handling and acceleration, chases him while setting loose hundreds of snakes by smashing their cages. The scene is well written, well shot and well directed and really adds to the tension in the story.

Late in the movie, there is an interlude with a broken down school bus. The setup of the scene is a bit foolish. Mann inexplicably stops when the driver of a school bus flags him down. Why, after it has become abundantly clear that there is a 40 ton death machine bent on killing you, would you stop to help someone along side the road? Mann stops and agrees to use his 1970 Plymouth Valiant to try to push a school bus to the crest of a grade so he can coast down the hill and bump the engine.

As Mann pushes, his bumper gets stuck under the bus and his car is trapped. The truck returns. Weaver scrambles and works the car loose and takes off. The truck makes a U-turn and its menacing grille bears down on the bus and the school children standing around. You’re sure that the truck is going to kill them all just to terrify Mann. Instead, it takes a break from its maniacal pursuit to help out the driver and his charges.

Matheson pauses to develop his climax a little better in the screenplay than he does in the story. Early in the movie, Mann stops for gasoline. Keep in mind, this was in a time when an attendant pumped your gas, checked your tires, and looked under the hood. The pump jockey tells Mann he could use a new radiator hose. Mann puts off the repair. We who have read the story know what happens because of that moment of neglect.

The movie finale is wonderfully shot and quite dramatic. The tanker truck and the orange Plymouth Valiant plunge into a canyon and explode in an impressive display. Mann looks on impassively.

In Duel, the movie, Matheson achieves something rare: he took his written work and improved it on screen. I can’t think of any other writer who has done this. Stephen King never improved any of his own work by translating it to the screen. Others, such as Brian DePalma, did with Carrie, but King never accomplished on his own.

Nor is this the only instance where Matheson took one of his stories and improved it for the visual media. Many of his Twilight Zone scripts were superior to the stories upon which they were based. Matheson is a rare kind of writer who moves so easily between stories and scripts.

Matheson preserves the key psychological component of the story, which is of course the anonymous nature of the driver. Just as in his story, the only glimpse Mann ever gets of his nemesis is a nondescript arm and an obscure profile. The truck is gray, dingy, and menacing. Credit Spielberg and his crew for finding a truck that ugly and a gifted stunt driver and bringing Matheson’s 18 wheeled terror to life. It’s unnatural ability to accelerate and handle the twisting and turning curves that challenged Weaver’s Valiant just added to its menace and provides just a hint at something supernatural about Mann’s adversary.

The only bit of foolishness is the scene in the truck stop which is written well in the story, but falls flat on screen. Mann engages in excessive inner dialogue voiced over by Weaver. It’s tiresome and dull. Also, Weaver over acts in the scene. It was this scene that Matheson used in the story to build Mann’s paranoia. It seems as if he tried to lift the story directly from the page instead of rewriting it for the screen.