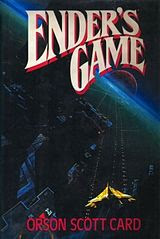 Ender Wiggin lives in a future where, when most families are restricted to having just two children, he is a third. The government has monitored his two older siblings and found promise in their genes of a great warrior, so they allowed the Wiggins to have one more. As a third, he is often the subject of ridicule and bullying.

Each child has a monitor placed on her neck that allows government and military officials to study their psychology and actions to determine if they have promise for the military, as they prepare for another strike by their mortal enemy, the Buggers, who attacked and nearly wiped out the human race decades ago. After watching Ender Wiggin deftly dispose of a bully, the military thinks it has perhaps found their new leader who will once and for all crush the Bugger army. But Ender Wiggin is just six years old.

Ender is whisked away from his parents, his older sister, Valentine whom he loves, and his older, sadistic brother, Peter, whom he fears. He is transported to a military academy where he is housed with other boys and girls his age, deemed exceptional and prime candidates for military training.

At Battle School, Ender finds himself isolated and alone. Younger than the other kids, and recognized as being the most exceptional, Ender finds solace in practicing his warrior skills in the various drills and tactics. He quickly moves up in his class and eventually becomes the best tactician in the school.

On his off time from drills and class, he takes to a video game in which he fights giants and children who turn into wolves. The game is seemingly purposeless, but provides diversion for Ender. Those games haunt his dreams at night.

Meanwhile, his brother and sister have struck an unlikely alliance to foster world peace. As the world cooperates globally to prepare for the inevitable Bugger attack, they still feud with each other. As relations between the United States and the Soviet Union heat up, Peter resolves that he and Valentine will start publishing on “The Nets” scholarly writings that will be so powerful as to influence world opinion.

Peter’s goal is world domination – a lofty goal for a child of 10. Valentine is horrified and reluctant to participate. But she sees an opportunity to perhaps use her abilities to temper whatever evil Peter has in mind.

Recognizing in his sister the ability to influence people with her words, he recruits her to be the writer for characters he dubs Demosthenese and Locke. Demosthenese will advocate diplomacy and an easing of tensions. Locke will push for a more hostile position. The relationship between the two nom de plumes will be as symbiotic as the relationship between Peter, who thinks for both identities, and Valentine who puts the opposing thoughts of the two into words that do indeed drive public opinion.

Ender quickly rises to be the commander of his own army in the battle games conducted in a zero gravity chamber. His new army, the Dragon Army, is made up of the students with whom he had the best chemistry in his previous drills. At the head of his own army, the school’s commandant pushes Ender two win increasingly difficult battles in which he is overmatched. They increase the pace of the drills by having his army fight several battles a day against increasingly difficult odds. Ender and his army meet every challenge, and Ender is promoted to Command School.

Upon arriving at Command School, Ender fines himself under the difficult tutelage of Mazer Rackham, the leader of the army that drove off the bugger armies in the second attack which was nearly fatal to Earth. Rackham scolds him, lectures him, beats him, and torments him as he goes about his training to learn to command entire fleets of ships.

Ender’s fleet is led by Battle School elite graduates – many of whom trained with Ender and were trained by Ender. Day after day, Ender and his army are put through the paces of increasingly difficult battle scenarios. Sometimes they triumph and sometimes they take great losses, but no matter how difficult the scenario, Ender’s forces manage victory.

Finally, he and his army get to their final exam – an assault on a planet guarded by an overwhelming force of ships. Ender’s fleet feints and parries, taking losses along the way. Eventually, Ender penetrates the planet’s defenses and unleashes a doomsday weapon known as a Molecular Disruption Device. All living creatures on the Bugger planet are destroyed. Ender’s fleet emerges victorious in their final simulated showdown.

After the exercise is over, Ender’s superiors inform him that none of the battles he’d fought since arriving at Command School were drills, but actual battles in with real killing. Ender has just destroyed the home planet of the insectile race known as The Buggers and destroyed all of their queens. The young Ender, unable to mentally cope with having just committed genocide, lapses into a deep, depressive sleep that lasts for weeks.

When he awakens, Valentine is there to greet him. She tells him that war has broken out on Earth and that Peter has emerged as a leader of an alliance known as the Hegemony. She wants to get away from Earth. Ender, deemed to powerful and dangerous to be allowed to return to Earth, joins her as they set out to settle on one of the Bugger worlds, now rid of their indigenous populations.

Upon arriving on the planet, the new settlers scout out locations for settlements. While scouting, Ender happens across a live Bugger cocoon whose inhabitant is able to communicate with him telepathically. The Bugger tells Ender that they did not realize at first that humans were an intelligent race. Upon learning it during their second attack, they broke it off and resolved to never attack the human race again. They were willing to live in peace when Ender wiped out their species.

Resolved to tell the tale of the Buggers and have the truth published, Ender writes a history of their race under the pseudonym, Speaker for the Dead. After this is done, he sets off with Valentine to find a world to re-establish the Bugger race.

This book was one selected by my book club. Knowing that it is one of the most respected science fiction novels ever written, I was eager to read it.

I wish I had read it when I was much younger. In my teen years, I’d have reveled in these characters. My middle-aged brain found it difficult to fathom that these children could have thoughts, ideas, and reasoning as complex as these kids did. Card establishes these characters’ age, but writes them as they were adults. This was our entire group’s chief criticism of the book.

Card’s writing is among the most compelling I’ve ever read. The term, “page turner” is too often used to describe books, I think. However, Card’s nifty narrative trick of having the two military officers analyze and discuss what had just occurred really drove me to move on to the next chapter when I’d resolved to put the book down at the end of the chapter previous.

Several in our club complained that they thought the end was overlong. The battle was the climax and that climax was delivered with a wonderful twist. But we followed Ender through his shock and recovery, discovery and analysis of the political situation on Earth, his departure to the Bugger world, and his pursuit of a new home for the race he thought he’d destroyed.

Perhaps Card took a few too many pages to get there, but he successfully resolves the moral conflict inside Ender. From the start, Ender loathed violence, but thrived in warfare strategy. His reaction to having wiped out an entire race is plausible. But to have left it there with the end of the battle would have made for an unfullfilling reading experience.

Ender Wiggin was an incredibly complex – probably too complex – character to leave us without some reflection on his part and some active resolution to deal with it. I thought Card pulled it off wonderfully.

Ender’s Game is one of the most respected science fiction novels ever written. It won both the 1985 Nebula Award and the 1986 Hugo Award – the two most prestigious awards in science fiction. Card would go on to write several successful sequels.

I have read very little modern science fiction, preferring to read the Golden Age material when life on Mars seemed to be a probability. I have always dismissed modern science fiction as too wrapped up in science and technology to be interesting to someone who just enjoys a good story. However, Orson Scott Card’s wonderful novel is making me rethink my prejudice against contemporary sci-fi.
Posted by Brian Schwartz at 5:42 PM