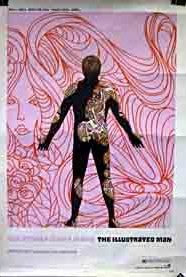 Book to Movie: The Illustrated Man (1969)
Screenplay by Howard B. Kreitsek
Directed by Jack Smight

In 1969, three stories from Ray Bradbury’s The Illustrated Man were adapted to the big screen by screen writer Howard B. Kreitsek. The stories were, The Veldt, The Long Rain, and the Last Night of the World.

The movie starts just as the book, with the young vagabond encountering the wandering stranger with all the “skin illustrations.” (Calling them tattoos makes him very angry). He’s looking for the house where the woman who drew the illustrations lives so he can kill her, he explains.

Just as in the book, he explains that the illustrations come to life and people can see tales of horror in them. The blank spot is reserved for the person to see visions of their own death.

In the book, the two pass the time fairly amicably before the Illustrated Man falls asleep and the tales unfold for the viewer. The opening sequence in the movie is a bit longer. Rod Steiger’s portrayal of the Illustrated Man is more menacing than Bradbury’s character, and he starts recounting his visit to the strange woman he theorizes is from the future. The first sequence opens with her tattooing a rose into the palm of his hand, then melts into The Veldt.

The plot of The Veldt unfolds much as it did in the short story with the spoiled children unhappy that their father vows to shut down, lest they become too attached to it.

What is fundamentally different is the attitudes of the parents; their attitudes toward each other and toward the society in which they live.

As I noted in my review of the story, many of Bradbury’s stories featured homes or devices that rendered mundane domestic tasks performed by humans to be obsolete. In Bradbury’s world of the 1950s, this was a good thing. In the 1950s, Americans avidly pursued modern conveniences, having been deprived of them during the war years. By 1969, society was much more cynical. The two bemoan the emptiness of their lives, with all of the chores being done for them – including the raising of their children.

In the story, the tension between the parents arose from disagreements over how to reign in their children’s fascination with the playroom. In the movie, there were obvious marital problems. Early on, the woman blurts out, “make love to me!” The husband responds with “Why?” She says, “Maybe this time it will be different.” Obviously, this was not a happy marriage. Later that night, as they lie in bed, he reaches out for her hand and she pulls it away.

The parents meet their end when their family therapist, who had recommended the nursery as part of some psychological program for raising children (shades of Dr. Spock) finds the tattered remains of their clothing in the veldt, with well fed lions lying nearby.

There is more flashback to the Illustrated Man’s visit to the illustrator which bear not on the next story which is The Long Rain. When Bradbury penned the story in the late 1940s, we had no idea what lied beneath the clouds of Venus. By 1969, we knew whatever there was not hospitable. Therefore, the planet in the movie’s story is not named.

This story unfolded almost exactly as it was told in the book. The chief weakness of the film version was, the story did not translate well to the big screen. Bradbury’s prose did an excellent job building the tension between the astronauts as they go slowly insane in the constant driving rain. Despite decent performances by the cast, the segment was dull. They couldn’t build the tension without overacting. Had the segment been longer, the rain would have driven the audience insane, but we really felt no sympathy for the characters, for who hasn’t had to spend time in the rain?

In the third segment, Kreitsek tries to upstage Bradbury by twisting the ending of Bradbury’s short tale of the end of humanity. The story, The Last Night of the World, was a short character study that’s tone was melancholy, but not gloomy and certainly not tragic. I’ll not spoil the ending for those who have not seen it, but Kreitsek gives it a twist to make the story an ironic tragedy. It’s not so bad as to make one groan in anguish, but Bradbury is a better writer than Kreitsek and Kreitsek should have known it. This story, like The Long Rain, just wasn’t a good candidate for the big screen.

Frankly, few of the tales in The Illustrated Man would have made for good movie or television. Unlike The Martian Chronicles that had a combination of philosophy and action driving the plot, most of what is in The Illustrated Man were observations of people in fantastic situations. There was a great deal of character study and sociological reflection in the book which Bradbury writes well. But it makes for a poor movie.

Kreitseck was not a particularly successful screenwriter. He wrote the horrible sequels to the original Walking Tall and a couple other titles I’ve never heard of. The Illustrated Man was his first screenwriting effort. I won’t say he did the best he could with what he had to work with, because it could have been a much better movie. However, if an anthology was going to be made of this book, he should have chosen stories like The Fox and the Forest and Marionettes, Inc. which were better stories and would have worked much better on screen.

This is the second Jack Smight movie I’ve reviewed – the first being Damnation Alley. There are no major flaws in the directing and credit Smight for not driving his actors to overact in The Long Rain. Steven Spielberg could not have made this film much better. The script was just too thin.

Rod Steiger is intense as The Illustrated Man. That’s good because the opening sequence with Steiger killing the garter snake and feeding it to his Pomeranian was probably the best part of the movie. Science fiction fans would recognize Steiger from his work in Mars Attacks!. Claire Bloom, who plays the tattoo artist is adequate. Horror and science fiction fans would recognize her from the 1965 version of The Haunting and Clash of the Titans (1981). She is well recognized now for having played Queen Mary in The King’s Speech.

The movie was a flop and deservedly so. Despite having Jack Smight, who was a veteran of directing science fiction and horror direct the film, the script was too weak and uncompelling to make interesting.
Posted by Brian Schwartz at 3:46 PM