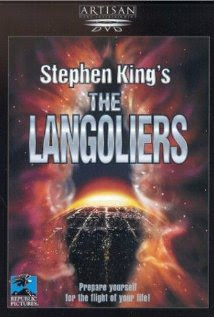 Book to Movie: The Langoliers (1995)
Written and Directed by Tom Holland
Based on the novella, The Langoliers from the collection Four Past Midnight by Stephen King

Seldom does a made for television movie series so closely resemble the text of the story as does Tom Holland’s teleplay based on Stephen King’s novella, The Langoliers.

Almost every element of the story is there, including almost verbatim dialogue. The only character omitted from the original story is the drunk who sleeps through most of the events. He wasn’t important to the written story and would have been unnecessary baggage in this story.

One important difference is we learn in the opening moments Nick Hopwell’s true nature and true profession as he is given his orders by an agent to kill the girlfriend of an important politician.http://www.blogger.com/img/blank.gif

The movie is well cast. Bronson Pinchot – almost exclusively a comedic actor – plays the antagonist, Craig Toomey. His pasty makeup and Pinchot’s ability to play a maniacal ass lifts the story and makes it watchable.

David Morse, who has stellar horror credentials for his work in 12 Monkeys, the Green Mile, and Disturbia, plays Brian and like Pinchot, lifts the moribund script with his excellent acting.

Dean Stockwell plays Bob Jenkins, the know it all mystery writer and actually makes him more likeable than the written character by humanizing the smug writer whose leaps in logic always seem to be correct.

The story is as ponderous and slow as the written version. Early on, the audience is intrigued by the mystery of the disappearing people and the haunting atmosphere of the empty airport. But from there, the constant discussion and pondering slows the story to a crawl, just as in King’s story.

When the Langoliers arrive, the producers did the best they could at computer generated effects with 1995 technology. They resemble those little red dots that were used in 7Up commercials in the early 1990s, but are passable.

The effect of the time rip is straight out of Star Trek: The Next Generation. It’s a multi-colored cloud that is entrancing.

The closing moments of all of the surviving passengers walking out of the airport together, arm in arm, leaving the airport is a little too happy and cutesy for the heavy events they have just survived, including the death of a ten year old girl and the loss of the only love of Laurel’s life.

With the two part television miniseries nearly identical to the King story, it suffers from the same weaknesses. There’s the let down at the half way point when the small nature of the problem is revealed. The audience is feeling a search of urgency, but the characters are not. They continue to ponder and discuss their situation.

While worse – much worse – movies have been made based on Stephen King’s work, The Langoliers is incredibly average. Nothing in the movie makes the viewer groan with disgust. But dull, poorly paced movie never delivers a thrill either.
Posted by Brian Schwartz at 6:00 PM