The Inhuman Condition: Books of Blood, vol. 4 By Clive Barker

The Inhuman Condition
Three teenage delinquents beat up a vagrant to steal his liquor. While going through his possessions, one of the kids finds a string with three tightly tied knots in it. Curious, he puts it in his pocket, takes it home, and starts trying to untie them. When he unties the first one, he unleashes a demon that kills one of his friends. The string falls into the possession of the girlfriend of one of his friends, and she unleashes a demon that kills her boyfriend. The youth gets the string back and notes the third knot is working its way lose on his own. He seeks out the vagrant they beat to ascertain if he can help hold back that third demon. 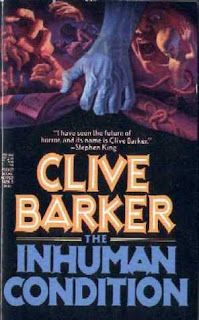 This was a clever concept for a horror story. The main character was well developed and the narrative flowed nicely with well paced action. Students of the short story should study this Barker work to learn how to properly write a solid short story that entertains.

The Body Politic
A man’s hands conspire against him whilst he sleeps. His hands have independent thoughts, ideas, and views on morality. They finally establish their dominance over their master and free themselves of their constraints and set out to recruit allies and wreak havoc on society. Soon, thousands of hands, cut from their owners, are terrorizing the city.

This story was campy, almost a spoof of detached body part horror. It was a great story for those who have sense of humor about horror. A love of B movie horror is almost essential for the enjoyment of this story.

Revelations
A traveling evangelist, his wife, and their driver stop at a seedy Texas motel to wait out a thunderstorm. Also taking up residence in the hotel that night are the ghosts of a former married couple. Thirty years prior, the wife and shot and killed her boorish husband in the very room where the evangelist and his wife are staying. She sees the ghosts and communicates with them. Her husband thinks the devil has worked its way into her soul. Two unhappy couples try to work it out as the storm rages.

The haunted motel motif has been done to death. However, despite the cliché of the setting, Barker tells an intriguing tale where the reader is never quite sure of the ending until he arrives there. It has all of the essential elements of a horror movie.

Down, Satan!
A wealthy businessman has lost his faith – or believes his faith has lost him. He can no longer feel the presence of God. So, he decides to put his soul in mortal danger, believing that God will sweep in and save him. He builds a vast castle to replicate Hell on earth. To attract Satan, he begins to torture and kill people in his Hell. We never learn whether or not Satan came to him or if God rescued his soul.

This was a refreshingly short story that was pure narrative. It is written in a style similar to H.P. Lovecraft. No dialogue appears in the story. However, while an ambiguous ending can often be effective, this ending was a little too ambiguous to leave the reader satisfied.

The Age of Desire
Police arrive on a scene of carnage at a pharmaceutical laboratory where a lab worker has been raped and eviscerated. The rapist, at large, is overcome with an overpowering urge to have sex with anyone and everyone he sees. Having been injected with an experimental aphrodisiac, he roams about the city, creating mayhem. The scientist behind the experiments tries to destroy his concoction and the records associated with it. The police try to put the pieces together and stop the mayhem.

This was an enjoyable, but unremarkable short medical thriller. The graphic gore for which Barker is noted would have seemed apt for this story, but is really toned down.

Posted by Brian Schwartz at 9:09 AM