Stephen King seldom delved into dystopia. While some might consider the Dark Tower a natural sequel to The Stand and therefore representative of a dystopian future, I see it as something larger. If we discount The Dark Tower, then King’s only real forays into dystopia are The Long Walk and The Running Man – both published under the Bachman name 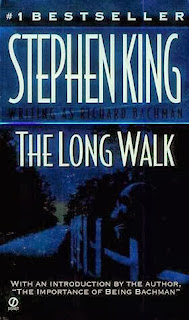 The Long Walk is a game, played for life or death stakes. One hundred 16 year old boys line up at the Canadian-U.S. border in Maine to start walking. They must maintain a speed of four miles per hour. When they drop below four miles per hour, they are issued a warning. After they get three warnings, they get death. They can drop warnings by successfully maintaining a steady pace for an hour per warning.

Overseeing this contest is an enigmatic government figure known as The Major. He is apparently the leader of what governs the United States in this time and place. He offers each boy encouragement and gets them started.

It is this contest that Raymond Garraty has entered. The prize is vague, but seems to be the every desire of your heart and mind.

We get little backstory on Ray Garraty. We know that his father worked for the government, but was prone to drinking and shooting off his mouth. Garraty’s dad was “squaded” which one can infer to mean impressed into military service. With his father gone, the family has fallen on hard times. He wants the prize for him and his mother.

The walkers start off and friendships and cliques form. The boys become friends and Garraty gravitates toward a fellow walker named Peter McVries. The two hold many long conversations as the walk down the road.

The odds makers favor is a kid named Scramm. Scramm is lean and fit and Garraty, while liking Scramm, is worried that he doesn’t have Scramm’s stamina.

Garraty makes other friends who brand themselves “The Musketeers” (not particularly original). They fall in and out of the group as the walk proceeds.

The loudmouth in the group is Barkovitch who proclaims that he will dance on their graves when he wins.

One boy, Stebbins, walks near the back. While cliques and groups move together, Stebbins walks alone, always. Stebbins fascinates Garraty. Garraty’s first bid at conversation with Stebbins yields monosyllabic answers. He’ll get more from Stebbins later.

And it proceeds. For many miles it goes until the first walker gets his “ticket.” From there, the conversations turn darker, but they go on. So does the walking well into the day, into the night, and into the next day.

Garraty is the hero of the crowds who line the streets of the many small towns the Walk passes through. He’s the only Maine native in the walk. His mother and girlfriend are waiting more than 100 miles ahead to catch a glimpse of him and Garraty is determined to make it long enough to see them.

One by one, the walkers fall. Some just fall down from exhaustion and are shot in the street. Some go insane and freak out. Some develop physical ailments. One kids succumbs to appendicitis. Scramm, the muscular odd on favorite, develops pneumonia. And the walk goes on.

Garraty has mental and physical crises of his own as he walks for days upon days without stopping. He finds walking with an erection to be difficult after he wanders to the side of the road, kisses a random girl, and cops a feel. At one point, he develops cramps and draws three warnings before he’s able to get going again. He also feels his sanity slipping away as the guns go off again and again.

He and McVries see each other through crises, but near the end, with just a few boys left, the whole group agrees that it’s all for one and one for all. No help allowed.

Garraty falls back to talk to Stebbins. He expects Stebbins to be philosophical or insightful. Instead, Stebbins starts goading Garraty, accusing him of having a Oedipus complex and wanting to see and kiss his mom more than his girlfriend.

Eventually, Garraty sees his mother and girlfriend. He stops and grabs Jan’s hand. He can’t let go. He is warned and warned again. McVries finally pulls him away before he’s given a ticket.

One by one, Garraty sees his friends die. It comes down to him and Stebbins. He talks to Stebbins again. Stebbins is in bad shape – as is Garraty – and reveals a secret. Stebbins is the Major’s son. The Major, according to Stebbins – has many bastard children all over the country. Stebbins says that he’s the rabbit that makes the other dogs run faster. With that, he sits down and gets his ticket.

Garraty wins! A Jeep bearing the Major drives up the road. Garraty sees it and stops walking. He starts running.

Stephen King wrote this book in 1966, many years before he’d write and publish Carrie. He says he wrote five novels before Carrie and he thought two of them were good. The first one he thought was good, written while he was in high school, was Rage. The Long Walk, written while he was a freshman in college, was the other. When it came time to publish books under a pen name, King was naturally drawn to it.

The Long Walk is a chore to read. It contains sporadic episodes of action in between long conversations. Yet it is dark and disturbing. I see it as almost prescient of what we today call Reality Television. Of the works published under Bachman’s name, it is my favorite.

One cannot really call it a character study because so many characters are developed around Garraty. Garraty is the central character, but he’s also the center for this multi-character drama. It’s not a horror novel because it contains no supernatural element. It is dystopian, but its time seems to be our own and the geography of Maine and New England are the same as ours, so it takes place in our world.

In short, this novel is an enigma. I don’t know why I like it so much because it lacks so many things that make for a good story. But I was drawn in. Even knowing Garraty was going to win (how else could the novel end) I was compelled to read. The Long Walk was a unique reading experience.

Posted by Brian Schwartz at 7:09 PM